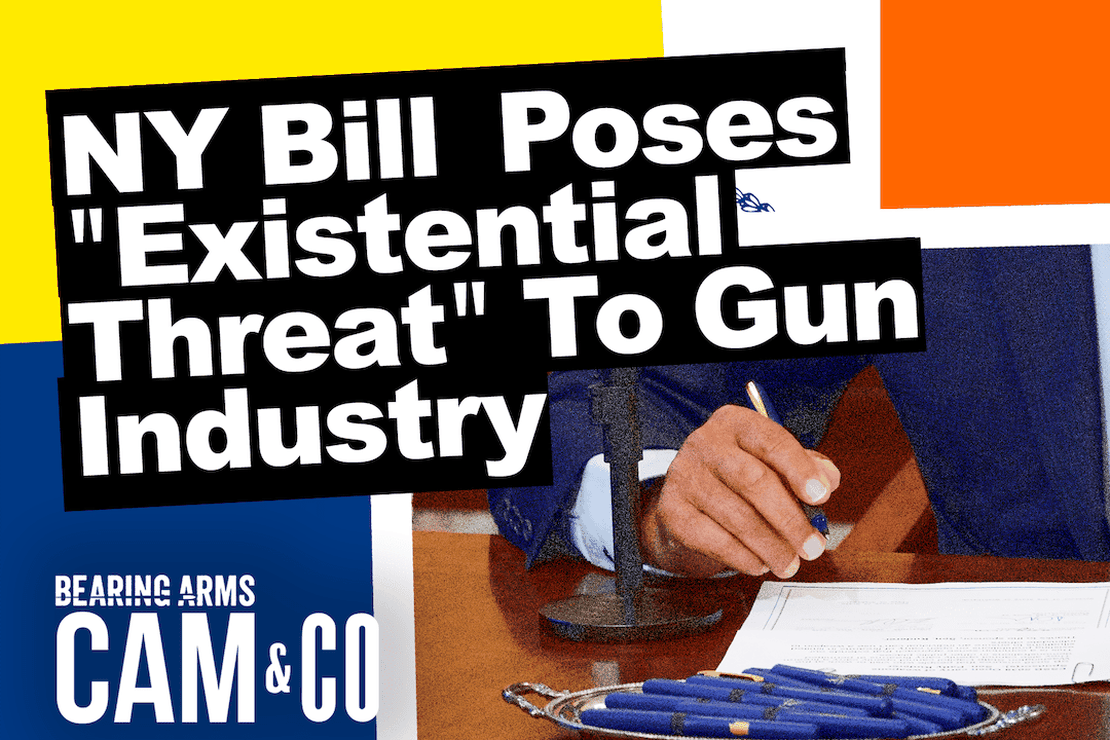 A bill on the move in the New York legislature is designed to bankrupt or destroy the firearms industry by allowing lawsuits against gun companies when firearms are used in crimes in the state by rewriting the state’s public nuisance law. We first told you about SB 1048A back in April, when state Senator Zellnor Myrie began stumping for the legislation, and since then the bill has continued to gain steam in Albana, with a Senate committee discussing the measure today in advance of a soon-to-come vote.

On today’s Bearing Arms’ Cam & Co, Larry Keane, the National Shooting Sports Foundation’s senior vice president and general counsel, explains why this bill poses an existential threat to your right to keep and bear arms, and why it’s critical that New York gun owners start speaking out and voicing their opposition to the latest attempt by the anti-gun lobby to weaponize the court system against our Second Amendment rights.

As Keane explains, Myrie’s bill would in essence declare the firearms industry to be a public nuisance, allowing manufacturers, distributers, and retailers to be sued anytime a gun is used in the commission of a crime in the state. The proposal is a flagrant attempt to get around the federal Protection of Lawful Commerce in Arms Act, which was passed by a bi-partisan vote in Congress back in 2005. That federal law is meant to prevent these types of junk lawsuits that are designed to bankrupt and destroy the firearms industry, but Myrie and his anti-gun colleagues believe they’ve found a loophole by making changes to the state’s public nuisance laws.

If this bill were to become law, Keane says many gun companies would simply pull out of the state of New York, but that alone wouldn’t be enough to stop the threat, because the bill doesn’t attempt to confine itself to guns originally sold in the state. Let’s say a gun was legally sold in the state of Virginia in 2011, but was stolen in a burglary a few years later and ended up at a crime scene in New York this year. Under Myrie’s bill the manufacturer, and even the Virginia gun shop could be subject to litigation in the state of New York, even if they followed federal and state law when it came to the manufacture and sale of the firearm.

Imagine if Democrats in New York tried to apply this same legal strategy to other industries. A 16-year old steals a case of beer from his neighbor’s garage, gets drunk, then “borrows” dad’s car and ends up getting into an accident that injures another. Who in their right mind would think that it’s the fault of Anheuser Busch or the Ford motor company?

Here’s another example, taken from another story we discuss on today’s show. An 11-year old boy in California carjacks someone, and then uses that car as a getaway vehicle in another assault and robbery. Should the state of California be able to sue General Motors because the auto company knows that a certain percentage of their products will be stolen, yet they continue to sell cars without “smart technology” that prevents them from being driven by anyone other than an authorized user?

It sounds insane, right? Yet this legal theory is a the lynchpin of a strategy on behalf of anti-gun groups like Everytown for Gun Safety to flood the courts with similar lawsuits. Even if each and every one of the suits are ultimately unsuccessful, gun manufacturers, retailers, and distributors are going to have to pay attorneys to defend them in each case, and none of these companies have the deep pockets of Everytown founder Michael Bloomberg or access to taxpayer dollars like New York Attorney General Letitia James. In short, the legislation is designed to hurt the gun industry, whether they successfully defend themselves in these cases or not. Death by a thousand cuts or death by one huge verdict; either way, the firearms industry could be killed off by Myrie’s bill, and that’s exactly what the gun control lobby is hoping for.