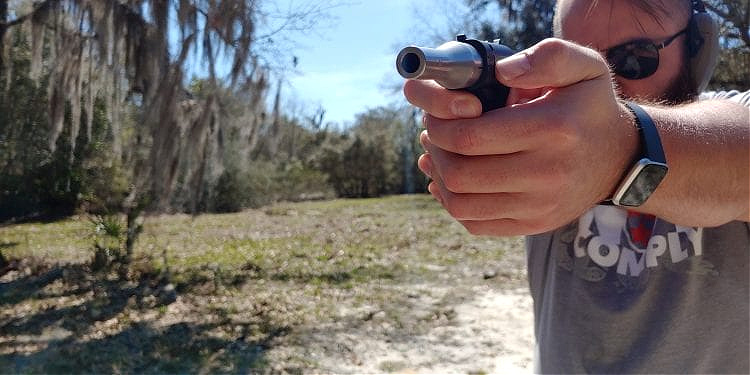 Weird guns are what keeps a stale industry fresh. I love weird guns, and one of my favorites is the Altor pistol. A single shot 9mm handgun has a rather niche appeal. What makes the Altor so fascinating and somewhat weird is the design. It’s so simplistic that it only has 6 parts, total. That’s it. When I first saw the Altor Pistol, I knew I wanted one. 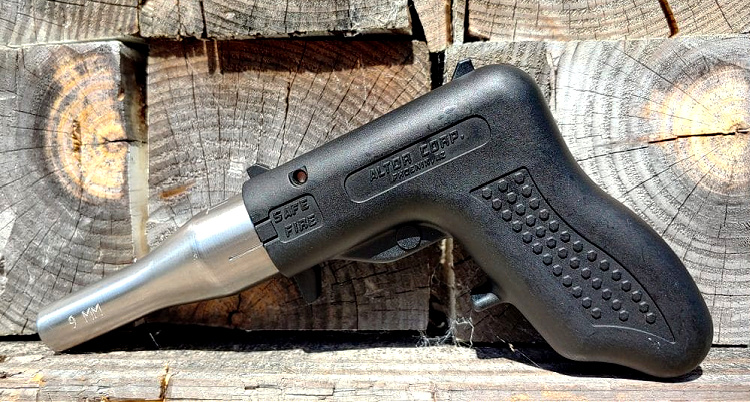 The Altor redefines simplicity with 6 parts total in its construction.

Those fellas at Altor created a modern CIA Deer gun.

Single-shot pistols for guerillas were such a popular idea with the United States military that they did it twice. Both designs fascinate me. The ‘Liberator’ was originally intended to be dropped to partisans resisting Nazis. Then the Deer gun came around and was intended to be dropped to South Vietnamese guerillas to fight North Vietnamese soldiers. 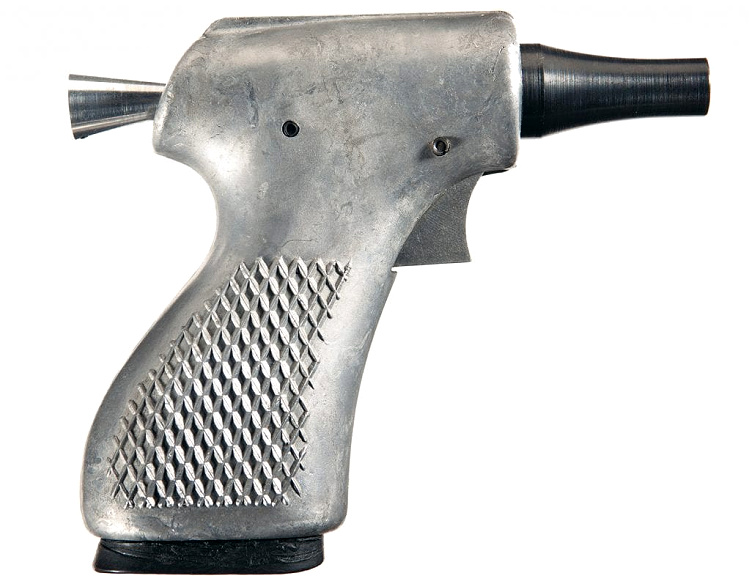 The Deer gun was the successor to the Liberator.

Designed by the clandestine bubbas at the CIA, the Deer gun maintained the same idea as the Liberator. A guerilla could use the Deer gun to sneak up on an enemy soldier and eliminate him.

Our partisan could then recover their enemy’s weapon and equipment and have a respectable loadout. The goal was to drop Deer guns behind enemy lines with three rounds of 9mm, and picture-based instructions on operating the weapon.

The project was largely unsuccessful, but that wasn’t due to the Deer gun in and of itself. The war ramped up quite quickly. It turned out carpet bombing is more efficient than a single shot 9mm pistol in aiding guerillas.

The Altor Pistol and The Deer Gun – Peas in a Pod

Roughly a thousand were made, and most were destroyed afterward. Only a few models still exist to this day. When we get into discussions regarding the usefulness, we could easily write off both the Deer Gun and the Altor pistol, compared to alternatives. 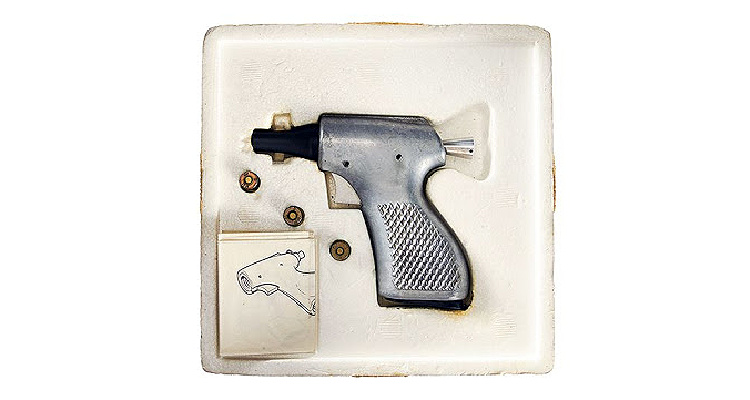 Fewer than 10 CIA Deer guns are known to exist. This one resides at the NRA Museum in Fairfax, Virginia. (Image Courtesy of NRA Museum)

I wouldn’t argue with you, but today this review is more about the merits of the Altor pistol. We wouldn’t review a double-barrel shotgun as a modern defensive gun, but we could review its merits as a double barrel.

Breaking down the Altor

It’s pretty easy to see how two single-shot 9mm’s could be compared to each other. Heck, the two look like distant cousins with a shared grandparent somewhere down the line. Like the Deer gun, the Altor pistol is a single shot 9mm that’s very simplistic in its design and very easy to use. 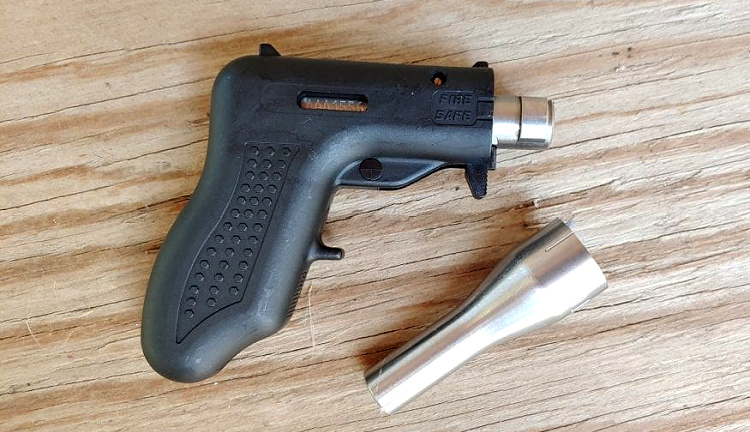 Removing the barrel is simple, and necessary to load the weapon.

The Altor pistol has the advantage of a few decades of gun design between it and the Deer pistol, which allowed for improvements such as a modern polymer frame that cuts weight, lowers the price, and allows for easier texturing. 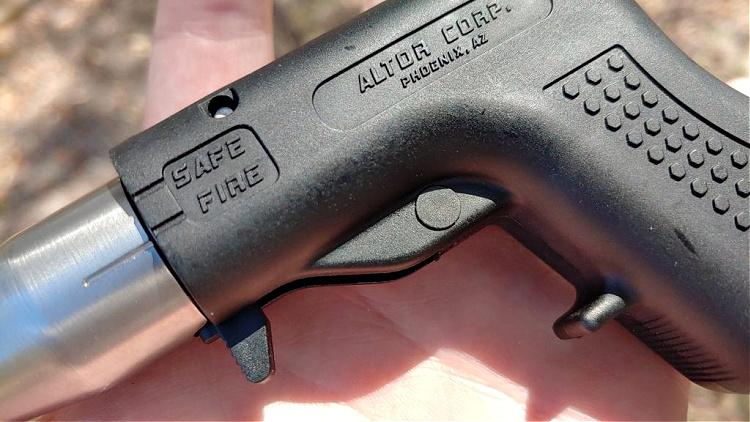 A simple polymer frame houses the small parts and gives you a stubby grip.

Better machining and finer attention to detail have resulted in a much more refined gun. Altor gave the pistol about an inch more barrel, which improves velocity and control. Altor also saw fit to equip the gun with actual sights.

A front and rear sight setup adorns the frame of the pistol. The Deer gun lacked real sights and have a groove and a plastic pin. That plastic pin doubled as a striker-fired safety to prevent NDs. When the shooter was getting ready to fire the Deer gun, they removed the pin and slid it in place to act as a sight. Very elementary, and that pin could break easily enough. 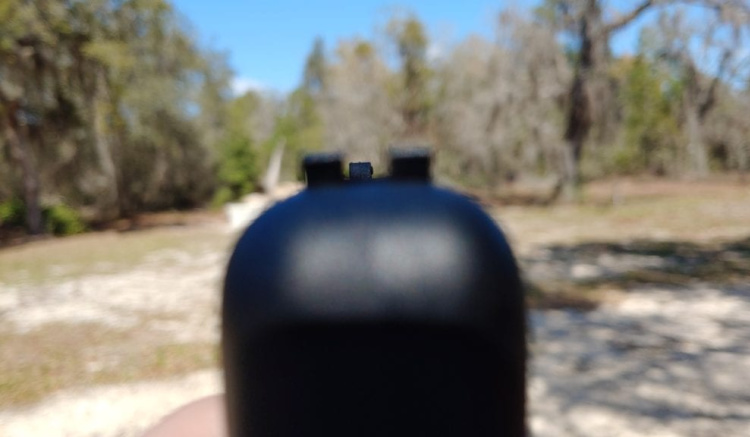 The sights are simple, but effective enough for such a small gun. A little white paint would go a long way to improve contrast.

Real sights are a welcome upgrade. A push-button safety gives the Altor pistol a manual safety option that isn’t reliant on a plastic pin.

The Altor pistol is a slamfire design, whereas the Deer gun used a manually cocked striker. When the Altor’s trigger is pulled to the rear, the gun does not fire. When the trigger is released, it slams home and fires the gun. However, the trigger must be pulled all the way to the rear for it to have the required force to fire the gun. It’s unique and rather interesting. It certainly lends to the simplicity of the gun.

Like the Deer gun, loading the gun means removing the barrel. The Deer gun’s barrel threads off the frame and the cartridge is inserted into the barrel and reattached.

Removing the Altor’s barrel is a bit easier. It’s more of a quarter rotation and slight retraction of the trigger. The barrel then pops off, and you load a cartridge onto the bolt face. Replace the barrel onto the frame, and the gun is ready to fire. 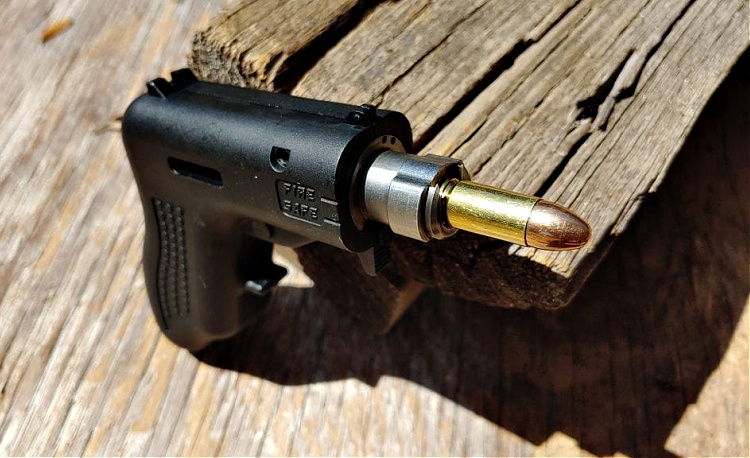 Drop the barrel on and it’s ready to fire. It’s also easy to unload and clear.

Since the cartridge remains on the bolt face, it’s faster and easier to reload than the Deer gun. The Deer gun relied on a dowel held in the grip to remove the cartridge case from the barrel. 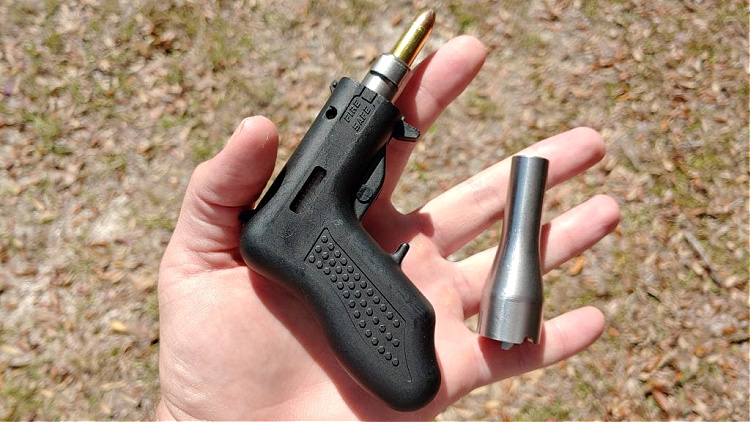 Loading the 9mm requires you to place the round on the bolt face. It’s simple and intuitive.

Range Time With the Altor Pistol

So there I was, neck-deep in the evil green that makes up the lush jungles of Florida.

I, a simple farmer turned partisan, spotted my prey. An enemy soldier, all alone but armed. Perhaps he was seeking a private place to relieve himself or was separated from a patrol, or maybe he wanted time alone to consider his place in the universe.

Well, I would certainly give him the opportunity to experience the latter!

Armed with my Altor pistol, I snuck up on my unsuspecting enemy. I needed his rifle and web gear if I was going to join the fight to resist communist scum from invading my lands. 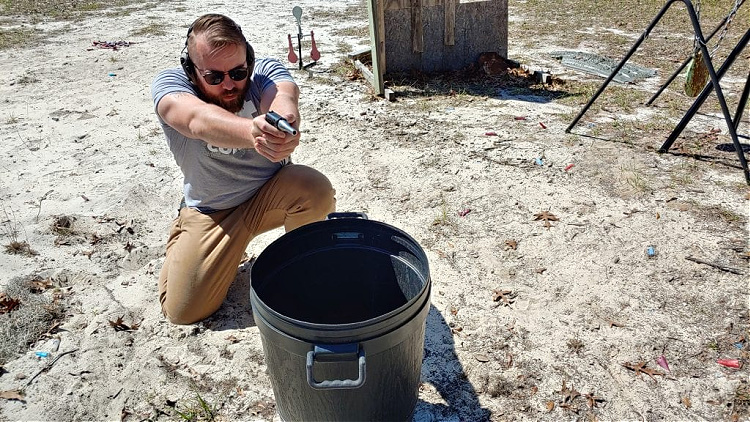 Yeah, it’s trash cover… literally, but it’s what I had on hand.

I moved like a fat house cat and closed the range and readied my pistol. Loading a single 9mm cartridge from my pocket took 7 seconds. I readied the pistol at 5 yards, concealed almost completely by cover. As I released the slamfire trigger, the crack of a 9mm filled the air. 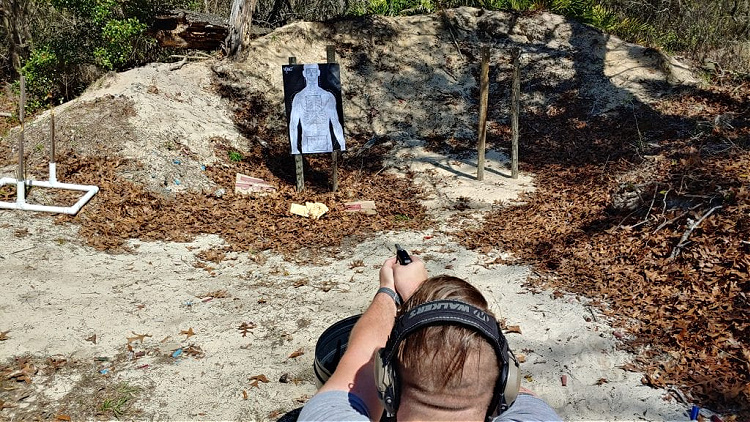 As I released the slamfire trigger, the crack of a 9mm filled the air.

Also, some pain from firing a single shot 10.5-ounce pistol filled my hand. “Ouchies,” I whispered to the trees and wiped a single tear from my face. They whispered back, “Man up, dude.” 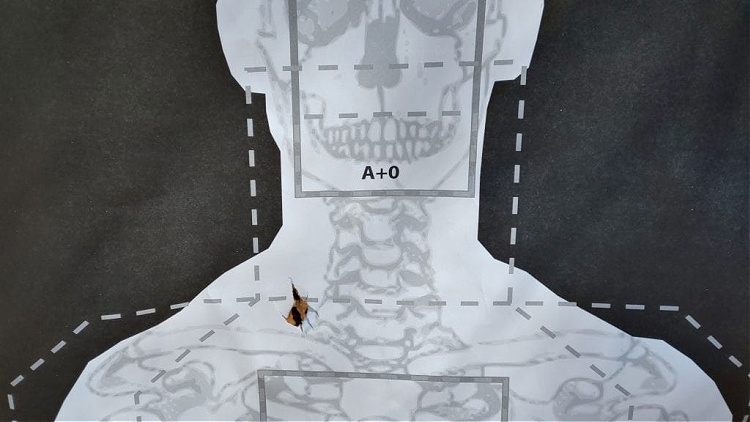 Got ’em right in the neck. Take that Commie.

My shot hit the guy right in the neck. Albeit, it seemed to hit a little more to the left than I wanted.

I repeated the drill at ten and fifteen yards aiming at the chest portion of our bad guy. Both hit the bad guy dead in the chest, each hitting a vital zone. I killed the bad guy dead three out of three times. The sights are decent, but I need to paint one white to make it more visible and contrast the other two rear sight pegs.

I’m new to slamfire triggers, so it took a few rounds to get accurate with the gun. I obviously trained with my Altor pistol before attempting to down an enemy soldier. Mastering the trigger is difficult because any movement after you release the trigger could throw your shot off. The Altor Pistol works best from 0 to 15 yards. 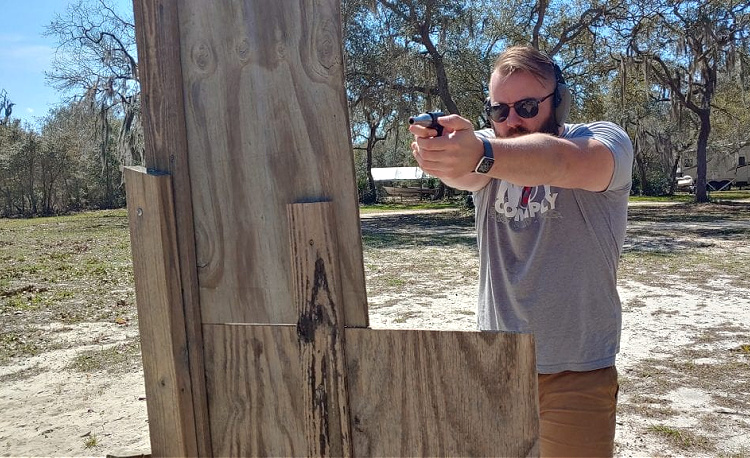 Cover is necessary when using a single-shot pistol. A missed shot is a rather big deal.

Once you master it, the only other downside is the sharper recoil. A reciprocating slide eats up a lot of recoil, and so does a little weight. This gun has neither. 115 grain loads aren’t too bad, but once you get into the 124-grain stuff and proper self-defense ammo, the recoil makes itself known. 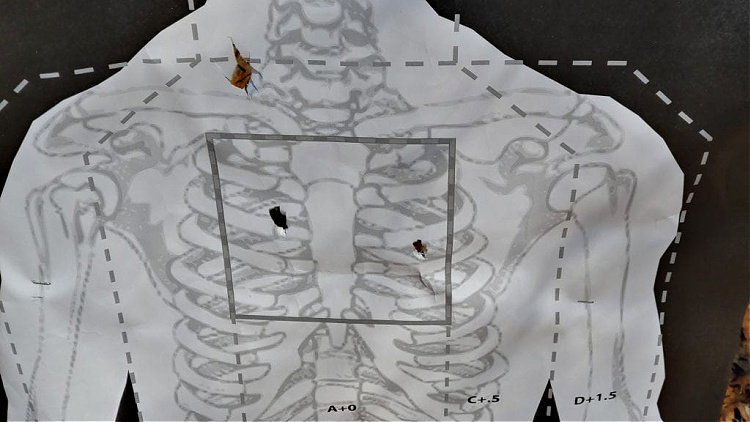 Chest shots at 10 and 15 yards proved the gun is surprisingly accurate for what it is.

It’s a challenge to shoot, but that makes it fun. It’s not an easy gun to handle and wouldn’t be my first choice for self-defense—but it works. As a kayaker, I plan to stash the Altor pistol in my float box for kayaking. You never know when the alligators might rise up!

The Deer gun cost 3.95 per gun to manufacture. You can purchase an Altor pistol in 9mm for right around 100 bucks. That cost is hardly a factor when compared to modern guns. The Altor functions rather well for the few dollars you spend on it. The Altor pistol has a fascinating design and certainly captures the same idea and function as the CIA’s Deer gun, but it does everything just a bit better.