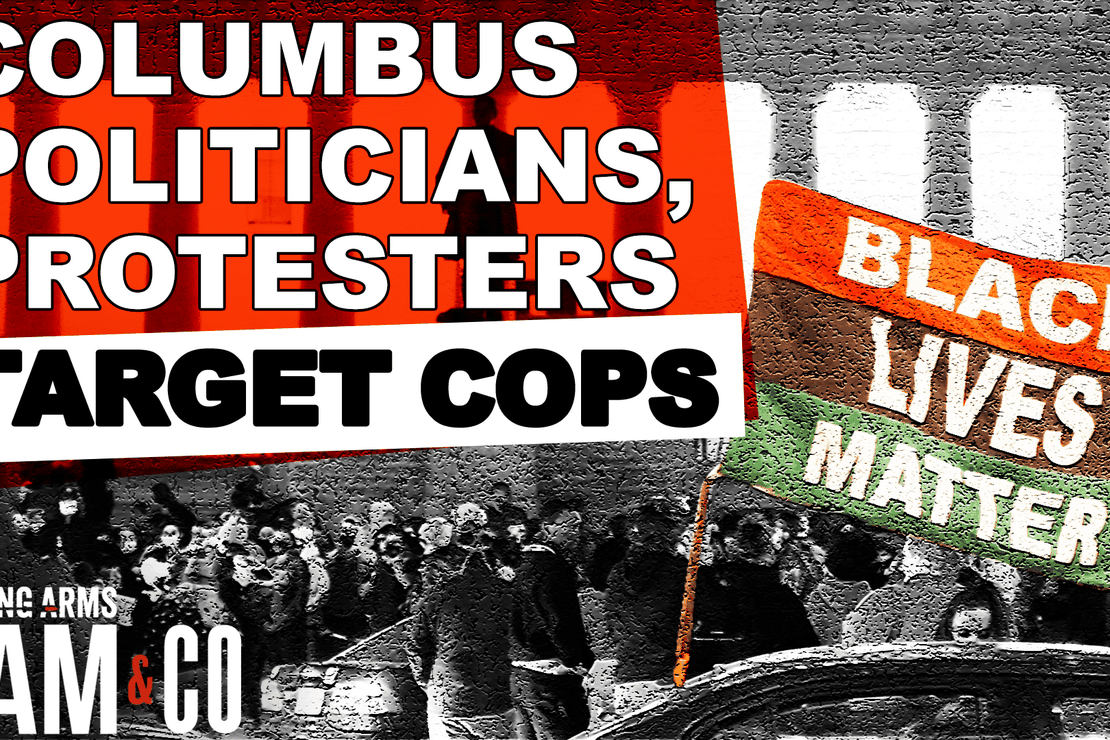 The police shooting of 16-year old Ma’Khia Bryant has led to calls to abolish police from activists in Columbus and city leaders vowing changes to the department’s training practices, but the howls of outrage are ignoring basic facts, including the knife that was in Bryant’s hand and the teenager she was about to stab when she was shot and killed by a responding officer.

On today’s Bearing Arms’ Cam & Co, local gun shop and range owner Eric Delbert (who’s also an active duty law enforcement officer) joins the show to talk about what he’s hearing and seeing in Columbus in the aftermath of the officer-involved shooting, as well as some recent stories that aren’t being talked about by politicians, activists, and an agenda-driven media.

Students from Ohio State University protested both on-and-off campus on Wednesday, many of them calling on the university to cut all ties with the Columbus Police Department.

More than 500 Ohio State University students marched to the Ohio Statehouse on Wednesday and called on university leaders to sever ties to the police division.

Activists gathered calling for abolition of the police and to reread a list of demands sent to the university by three Ohio State student governments in June 2020 following the murder of George Floyd.

Students were also upset there had been no message sent from Ohio State President Kristina M. Johnson or other university channels condemning Ma’Khia’s death Tuesday, calling the silence “unacceptable” and “shameful”.

Proof that education doesn’t equate to wisdom. Eric Delbert and I both agree that Bryant’s death (by the way, it’s very odd for a newspaper outlet like USA Today to refer to someone in a news story by their first name, as the paper did in the excerpt above) is tragic, but the shooting was justified, unfortunately, because Bryant was in the process of stabbing someone. Her arm was reared back, a knife in her hand, and she was a second away from plunging the blade into the body of another teenage girl.

You can mourn Ma’Khia Bryant’s death. You can question the failures of her family and the foster care system. You can even wonder why Bryant was shot, as long as you’re willing to honestly listen to the explanation. What you can’t do, at least not without destroying every shred of credibility, is to pretend that Bryant trying to stab another girl is irrelevant to the fact that she was shot and killed by a responding officer.

Unfortunately from the White House down to local activists in Columbus we’ve seen that kind of gaslighting take place. As Eric Delbert says, though, these folks aren’t just ignoring the inconvenient truth about My’Kiah Bryant’s death, they’re also ignoring a wave of juvenile violent crime in the city.

On the very same afternoon that a Columbus police officer shot and killed Bryant, a 15-year old in the city shot and killed another teen as the two exchanged gunfire. There’s been almost no news coverage of this death. All we know is that Trevon Dickson wounded the teen who shot him, and the suspect was arrested at a local hospital. The White House hasn’t been asked for comment. Lebron James hasn’t weighed in. These people didn’t give a damn about Trevon Dickson when he was alive and they don’t care now that he’s dead. Maybe if an officer hadn’t shot My’Kiah Bryant at roughly the same time, the local gun control groups would have put out a press release using Dickson’s death as a call for more gun control laws, but because there’s a far more important story as far as activists are concerned, Dickson didn’t even that that.

We should also care about the 14-year old in Columbus who was arrested in February for carjacking a 71-year old woman, and the 15-year old who confessed last month to taking part in at least 50 car thefts and carjackings in the Columbus area. We should care about all of these kids, but we shouldn’t excuse or dismiss what they’ve done, and we certainly shouldn’t lose ourselves to the lunacy of thinking that the police are the only (or even the biggest) problem in Columbus right now. Juvenile violent crime is spiking, not just in Columbus but in many of the surrounding suburbs as well. On today’s show, Eric Delbert says he’s concerned and convinced that we’ll soon be seeing a wave of officer retirements and exits from the force, because he doesn’t believe the city’s leadership has the spine to stand up to the mob and hold fast to the facts.

I’m not one who automatically comes to the defense of police officers every time they discharge their weapon. I do believe, however, in looking at the facts in each individual case, and there’s a concerted effort by many on the Left at the moment to do the exact opposite; to ignore the video evidence and eyewitnesses who say that Bryant posed a threat to the life of the teen she was attacking because their “greater truth” demands that police are guilty of a crime every time an officer uses their weapon while on the job. That’s dangerous for all of us, including the troubled kids on the streets of Columbus like Trevon Dickson, some of whom are certainly capable of turning their life around before it’s too late, if they could get the help and support they so desperately need.