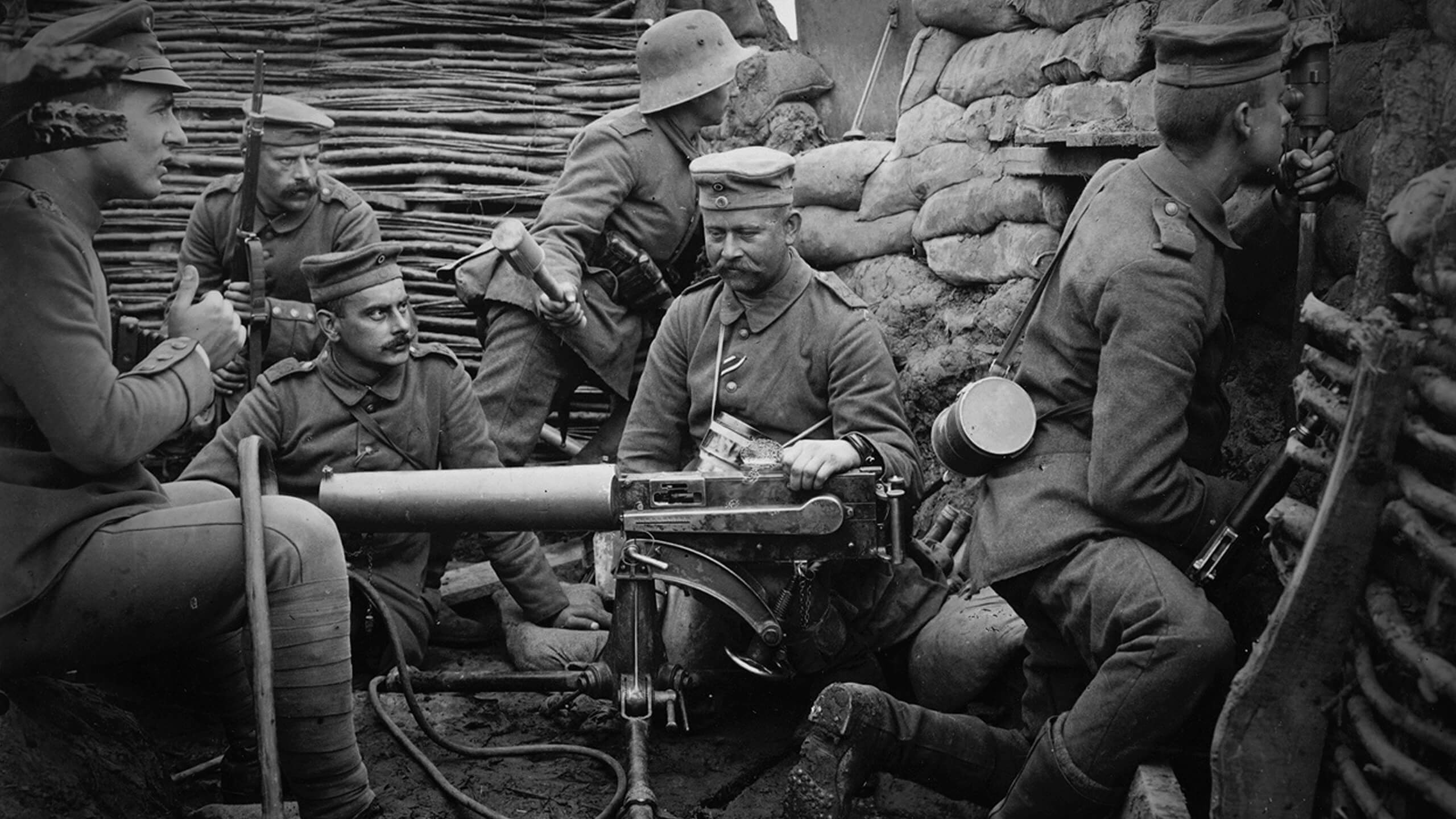 World War I was the brutal scene of where old world tactics smashed up against new age technology. Perhaps no better example of this was the machine gun’s ability to break infantry charges. For the German army, the MG08 was the tool of choice.

While modern U.S. warfighters could soon be armed with a yet undetermined Squad Automatic Rifle (SAR), since 1984 infantry units have relied on the M249 Squad Assault Weapon (SAW) to provide the impressive firepower of a machine gun combined with the accuracy and portability of a rifle. This concept of providing greater firepower and mobility was born in the trenches of the First World War.

The various combatant powers each took a different approach to the problem of attacking fixed and well-defended enemy positions with main battle rifles that could only be described as not up to the task. This is because when World War I broke out in 1914, the armies of Europe marched off to war expecting a “short and glorious conflict” that would be over before Christmas.

Europe hadn’t experienced war on such a scale before, and it had been 100 years since a true European-wide conflict had taken place. During the Napoleonic Wars of the early 19th century, the average trained and professional soldier could be capable of firing three to four rounds each minute. The bolt-action rifles that were developed by the end of the century and issued to the armies of Europe in 1914 allowed a far faster rate of fire but were also notably far more accurate — and hence far deadlier.

Then there was the machine gun.

Enter Sir Hiram Maxim, an American-born inventor, who had been a prolific designer of various household products including a mousetrap, curling iron and notably a steam pump. He even disputed fellow inventor Thomas Edison’s claims of inventing the light bulb, while he also reportedly experimented with powered-flight before the Wright Brothers. Yet, his name is remembered today for the weapon he developed.

An oft-repeated story is that he was told if he wanted to make a “pile of money” he should instead “invent something that will enable these Europeans to cut each others’ throats with greater facility.”

Maxim wasn’t actually a gun designer – unlike contemporaries such as John Browning – but after being rolled over by the recoil while firing a rifle, he began to explore ways to harness that energy. After a series of trials and errors, Maxim went on to create the first recoil-operated firing systems, a concept that has remained in use to this day.

Essentially, the energy from the recoil on the breech block is used to eject a spent cartridge and insert the next one. Maxim’s design allowed a single soldier to fire 600 rounds per minute – equal to the firepower of an entire line of troops. The Maxim gun was introduced in 1883, and it was soon adopted by the British Army, which used it in numerous colonial campaigns.

The weapon proved so lethal that it was memorialized in a poem by British-French writer and historian Hilaire Belloc, who wrote:

Whatever happens, we have got
The Maxim gun, and they have not

While the British military was the first to use the weapon in large numbers it was their continental rival, Germany, that saw the potential in the weapon like no other.

The German government liked what it saw with the Maxim, and in the 1890s German manufacturer Ludwig Loewe signed a seven-year contract with Maxim to produce the machine gun under license. When the original licensing deal concluded, the gun’s designs had evolved enough that the new firm of Deutsche Waffen und Munitionsfabriken (DWM) produced its own modified version.

The result was the Maschinengewehr 08 (or MG08), named for 1908, the year of its adoption. Like the original Maxim design, the MG08 was a water-cooled machine gun that had a jacket around the barrel filled with water to keep the weapon from overheating. It was produced at DWM’s factory in Berlin and by the government at its Spandau arsenal — the latter fact resulting in some describing it as a Spandau machine gun.

The MG08 was originally employed on carriages, but at the outbreak of the war in August 1914 the machine gun was issued with a heavy “sledge” or “sled” mount — officially the “Schlitten 08.” In addition to being the mount, which allowed a team of four to transport the weapon, it held extra barrels, tools/cleaning kit and even oil containers. The concept was that with this system nothing could be forgotten or misplaced. Additionally, you could fold the sledge flat and two soldiers could carry it like you would a stretcher. Two additional soldiers would carry the water can and ammunition boxes.

Yet, it was not what could be considered a mobile weapon. It may be easy to see this as needlessly complex, but it was actually German efficiency at its finest. However, it was heavy. Along with the nearly 60-lb. gun, the MG08 unit weighed in at nearly 140 lbs. The water can and ammunition only added to the weight.

In a fixed position, the MG08 on a sledge mount was devastating to any attackers — and one only needs see the opening cavalry attack in the film Warhorse to understand why.

It was also weapons such as the MG08 — as well as the British-designed Vickers (which was an improved version of Hiram Maxim’s weapon) — that led to the armies digging in. Simply put, the machine gun is among the reasons why the soldiers endured some four years of trench warfare.

While the MG08 was ideal when repelling enemy attacks, even by 1915 the Germans saw the need for a more portable version. Attempts were made to create a smaller, more portable tripod, but those efforts still required that troops had to stop to set up the gun to fire — a deadly proposition to undertaken in the trenches.

Under the direction of Colonel (Oberst) Friedrich von Merkatz, the Spandau factory created a new version of the weapon in 1915, which was dubbed the MG08/15.

It was portable — at least in theory.

Rather than the traditional “spade grips” at the back of the weapon, it had a pistol grip. Added to it was a short rifle-style buttstock and a bipod. Interestingly, this didn’t really reduce the weight of the actual gun, but rather came up with an alternative method to utilize the weapon without the heavy sledge mount or even small tripod.

In addition, it was still water-cooled and the MG08/15 still fired from a belt. However, German designers considered the latter point and designed a special “belt drum” magazine that could be mounted to the side and which held a single belt with 100 rounds. This was arguably the first attempt to provide a fixed box-style magazine on an automatic belt-fed weapon — again not all that different from the Cold War-era M60 or M249 SAW.

The resulting design was still a heavy weapon that weighed upwards of 60 lbs. with ammunition and water in the barrel jacket, but it was compact enough that a team of two men or even a single dedicated soldier could move forward with the weapon. However, while video games may suggest that soldiers could “run and gun” with the MG08/15, this wouldn’t have been ideal and certainly not accurate. Any operator would be as likely to hit his own advancing troops as he would the enemy.

However, as the MG08/15 could be employed as both an offensive and defensive heavy machine gun, the German Army increased production of the weapon. By the end of the war in 1918, the MG08/15 became the most common German machine gun on the front lines, and despite shortages the German Army even reached its goal of full allocation of six guns per company or 72 weapons per regiment.

By November 1918, more than 130,000 of the MG08/15s were manufactured. The weapon in both its original and updated infantry configurations was durable and generally reliable, which is why it saw use after the First World War in the Russian Civil War, the Polish-Soviet War, the Chinese Civil War, the Spanish Civil War and even in World War II and the Korean War.

An aircraft version of the MG08 was also produced that didn’t require the water jacket for cooling, and it was widely employed on most German fighters.

Additionally, an air-cooled version, the MG08/18, was also tested in small numbers in the final year of the war. It featured a changeable, heavier barrel to cut down on the problem of overheating. However, it proved to be too complicated to change quickly in the field, but it was a sign of things to come as changeable barrels were later utilized with Germany’s MG34 and MG42 general-purpose machine guns.

Despite the fact that the MG08 and MG08/15 were among the most produced machine guns of the First World War, the weapons never became iconic in war movies. In fact, the first time the MG08 was seen on the screen was in the 1918 propaganda film Hearts of the World, it is a poorly-built mock up seen in the background in a “German bunker.”

Interestingly, it was the 1935 film The Lives of a Bengal Lancer— the story of a British officer on the Northwest Frontier of India in the late 19th century starring Gary Cooper — that featured an MG08 in an action scene actually operated by the film’s stars. Of course the British didn’t use the gun, so it was likely a stand-in for the Maxim.

MG08/15 machine guns get even less big screen treatment and are usually only seen in the background. One is seen in use as an anti-aircraft gun in the Indiana Jones-wannabe film High Road to China (1983) in use by troops of a Chinese warlord. It is true that China produced a copy of the MG08 but not the MG08/15, so it seems like an odd choice for the film — but then again, it was filmed in Yugoslavia!

More recently it appeared in the super hero film Wonder Woman where an MG08/15 with a belt drum can be seen in all its glory.

The 2014 first-person shooter (FPS) video game Verdun accurately depicts an MG08/15 in use, including the fact that players can’t “run and gun” with it – something that can be done in games such as Battlefield 1. Certainly, the soldiers in the trenches 100-plus years ago wished it were that easy to carry!