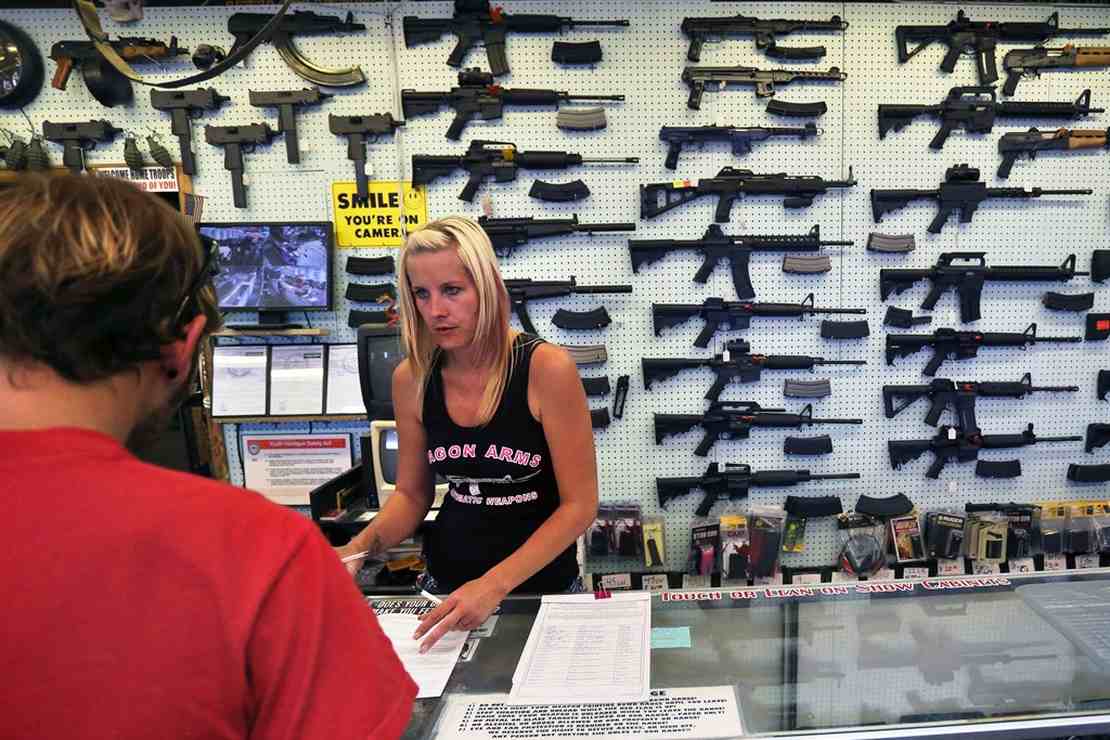 Guns are a hot-button issue in this country and they have been for a while. For better or worse, there’s a lot of arguing that goes on and none of it is particularly pleasant. Not when the country already feels like it’s on the brink of civil war.

There needs to be some way we can sit down and calmly discuss the issue.

However, there are ways that aren’t really going to fly.

Over at Ammoland, noted firearm instructor Rob Pincus penned a post with Dan Gross, a former president of the Brady Campaign, talking about establishing a productive dialog.

Although many other issues have understandably dominated the news cycle, we are at a critical moment for guns. Over the last year, gun sales have reached unprecedented levels, as have gun-involved homicides, and the House has recently passed H.R. 1446, The Enhanced Background Check Act of 2021, which is currently being debated in the Senate. Recently, a wave of tragic mass shootings has put the gun issue in national headlines as President Biden has called on the Senate to pass the background check bill, adding that he supports a ban of “assault weapons.”

We are two advocates, activists and leaders from opposite sides of the “gun debate” who have come together because we both believe we are at a make-or-break moment. Suffice it to say, there is plenty that we disagree on, but for anyone with the genuine goal of reducing the number of preventable gun deaths in our nation, we believe we have an opportunity for real impact that has not existed in years and, if we are not able to seize it, it is likely to have negative repercussions for years to come.

At the end of the day, every decent American, from those who love guns to those who hate them, and everyone in between, wants the same things: to protect themselves and their loved ones, and to make our homes, schools and communities safer. This common ground provides ample opportunity to achieve historic impact on the gun deaths we all want to prevent.

But bringing this opportunity to fruition is easier said than done. This basic point of fundamental agreement between people who own guns and those who don’t has always existed. Yet it is still perceived as a culture war and, as a result, little has been achieved. This is because no true counter narrative has ever been established to seriously challenge the polarizing political debate being perpetuated by extremists on both sides and, unwittingly by those with pure intentions. As long this remains the case we cannot expect anything to change. Fortunately, we believe a paradigm-shifting counter narrative exists, specifically:

Together, we can cut the number of gun-involved deaths in our country in half and make all of us safer, just by keeping guns from the people we all agree should not have them (i.e., people who are a danger to themselves or others).

We believe that it is essential to root any solution, political or otherwise, in this deceptively simple message.

That’s right, it looks like Pincus is taking a position in support of things like universal background checks.

Now, this is bothersome for me. I don’t know Rob particularly well. We’ve communicated a bit on Facebook a couple of times, but we’re not best buddies or anything. That said, I like Rob.

If he’s actually taking an anti-gun position, though, I think it’s wrong. Especially when you read this:

Fortunately, the policy area with the most synergistic message is also the one that represents what we believe is the greatest potential for impact: Expanded Background Checks. The overwhelming majority of gun owners have already accepted that anyone engaged in the business of selling guns commercially, should be required to conduct a background check. At the same time the two of us believe that many private transfers, such as gifting a gun to a family member or letting a fellow member of a gun club borrow a firearm for a competition or hunting event should be legal and remain a private transaction outside of government regulation. We believe any expansion of the Background Check requirement should be focused on transfers to strangers. Sure, there are some important details to work out around exceptions such as specific definitions of “strangers,” and exceptions that would make it impossible for the government to compile a comprehensive list of gun owners; but we are confident that there are solutions that can make a huge impact if we stick to the principle and message of only keeping guns from the people we all agree shouldn’t have them. This is also how to “walk the walk” in terms of demonstrating that we are not trying to limit gun ownership among responsible gun owners and how to give substance and true credibility to the claim of respecting gun owners and the Second Amendment.

This stands in stark contrast to what Pincus has said previously. As the executive vice president of 2AO.org, Pincus wrote the following:

Background Checks for private transfers? (Against)

That’s a reasonable position. That doesn’t seem to be what Pincus is saying further up, though.

Now, don’t get me wrong. I want a productive dialog with gun control advocates as well. I think we’d probably be better off if we could have such a thing.

I just don’t see why starting that should require us taking yet another step back.

Let’s note that gun folks rolled over for the National Firearms Act in 1934 and the Gun Control Act in 1968. They played nice during the Brady Bill and the Assault Weapon Ban of 1994. And there are plenty of other examples.

But what did we get in return? Each time we tried to give a little, we got nothing in return. What we got is more and more encroachment into our rights with zero regard for anything. It didn’t create a productive dialog, it simply encouraged the other side to push further knowing full good and well that they weren’t going to have to actually give up anything.

Compromise in the gun debate has typically been gun control advocates agreeing to not take as much as they want. That’s not compromise, that’s still surrender.

What that won’t be, though, is productive dialog. It’s nothing more than giving in to your long-time abuser and hoping they’ll start playing nice. As an abuse victim myself, I’m not really interested in playing that game, nor should anyone else.

Yet is that was Pincus is saying? Seems pretty straightforward, doesn’t it?

Well, it may seem that way, but I reached out to Pincus to get his take. Here’s what he replied:

I do not support ANY background check.

A comparative conversation about “what’s worse?” or “what’s better?” is a nuanced thing that most people in the gun community are afraid to have. When you look at magazine capacity limits, feature/function based bans and background checks, what you think is the worst type of gun control in regard to reducing negative outcomes? I think it’s a pretty simple question. Unfortunately, if you pick one, you will get picked on in the gun world for not simply pounding on the table and childishly asking “What part of ‘shall not be infringed’ don’t you understand?”

Having a discussion with a lawmaker that wants to pass gun control laws about “better” or “worse” doesn’t mean one supports gun control laws. Some people take the position that they won’t talk to people who are trying to write gun control laws because it’s politically safer to just say “I oppose any law!” …. I oppose gun control laws, but that doesn’t mean I want anti-gun people writing them without any influence, education or gun rights protections involved. Take Red Flag Laws. I oppose them… but, if one is going to be enacted, I’d much rather it had a clear timeline for the restoration of rights, mandate for a court appointed attorney and stiff penalties for abuse.

Firearms involved Suicide is the biggest problem the gun community faces. As the article points out, education and voluntary programs are the best ways to address that issue (and any other).

When it comes to policy, it only takes 1 bullet from the most archaic firearm to kill yourself.

So, allowing “suicide prevention” to even be part of a conversation that leads to any limit or ban as a viable option is a failure. Any gun control proponent who mentions either option and suicide prevention in the same breath is being disingenuous. At least there is an articulable path they could take with background checks.

He also included a link to Dan’s speech at a Second Amendment rally back in 2019 to address the point that you can actually change minds.

In other words, Pincus says there’s a lot of nuance to the article that people, myself included, may have missed. That’s certainly fair. Pincus also points out a fair bit of hypocrisy in the firearm community. “We have plenty of people that DO pound the table saying ‘all gun laws are infringements!’ With a CCW permit in their wallet,” he told me, also pointing out to those who talk about being ungovernable while filling out their 4473s and paying their tax stamps on suppressors and full-auto weapons.

Pincus also points out the “exceptions” listed above. He notes that there are a number of states already have universal background checks with no exceptions. Implementing something like this would potentially override those laws and actually help expand gun rights for millions of Americans.

Now, for many people, that’s a nuance without a difference, but it is different.

I’m not saying I agree with Rob, here, but I get what he’s saying. It’s a discussion we need to have. However, I also maintain that I don’t see how taking steps backward actually wins us anything.

Right now, a lot of people are blasting Pincus, calling him all sorts of names because he has made a stand different from us. I don’t think that’s fair. He’s taking a different approach, which can and should be discussed, but to automatically dismiss him because of that isn’t really going to accomplish much of anything.