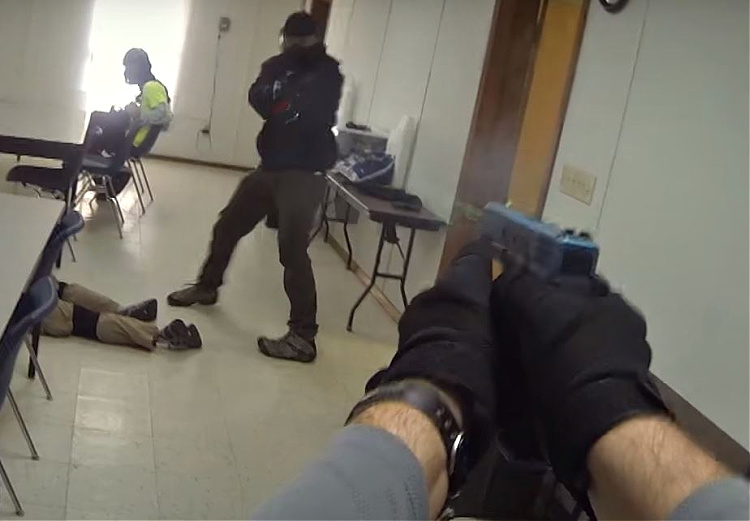 While it is impossible to fully replicate what it is like to get into a real gunfight, you can come close in a way that everyone still goes home when it’s over. It’s called Force-on-Force training, and it’s a highly effective training tool.

Like so many gun folks, my life in firearms started by shooting at standing targets.

For me, it was at a friend’s farm when I was in high school. There was a small lake on his family’s property with a hill on the other side that made a great backstop. We started small, with his Ruger 10/22 rifle, shooting random targets on the far side of the water just so we felt like we were showing off: a leaf, a stick, a clump of grass, anything that looked decent.

As I got older, I bought a handgun and started shooting at a local indoor range, another typical step in the gun journey. A few years ago, I got my concealed carry permit and started carrying every day. Then I got into rifles and all the important accessories that come along with gun ownership.

Along the way, I took a variety of classes to improve my skills, training on a multitude of targets – from standard paper B-27s for basic and advanced marksmanship to pivoting trainers that improve decision-making skills.

As different as each one was, they had one thing in common: they didn’t shoot back.

That all changed when I was invited down to Louisiana a few years ago to be the “good guy” in some Force-on-force (FOF) training.

What is Force-on-Force Training?

You’re in line at the grocery store, minding your own business, just waiting to check out, and the guy in front suddenly pulls out a gun to rob the register.

What do you do?

This is what Force-on-Force training is all about. It takes real-world situations that could happen anytime, anywhere, and walks through them at full speed but without real bullets.

FoF training typically uses guns that have been specially made or modified to shoot only marking cartridges, kind of like paintball but more accurate. And the guns are the kind of guns you might carry with you every day. But none of them shoot real bullets, only the special paint rounds, to maximize safety and allow for real combat, but where nobody dies 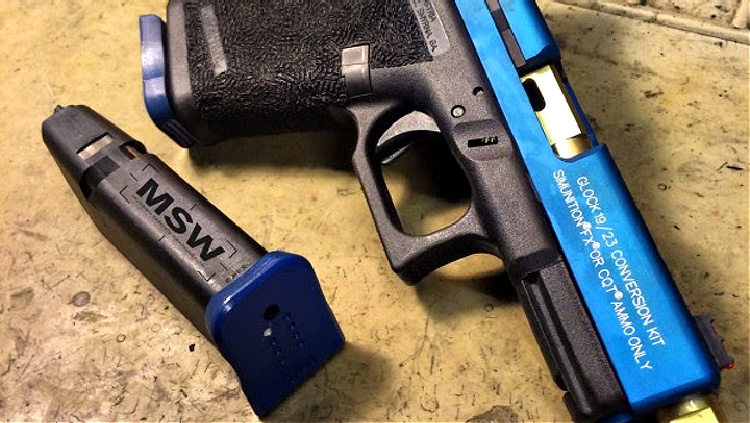 All role players suit up in protective gear because, while the marking cartridges might only be paint, they hurt! You’ll know when you get hit by one. It not only leaves a bright-colored paint mark but also a bruise, a painful reminder that you screwed up. 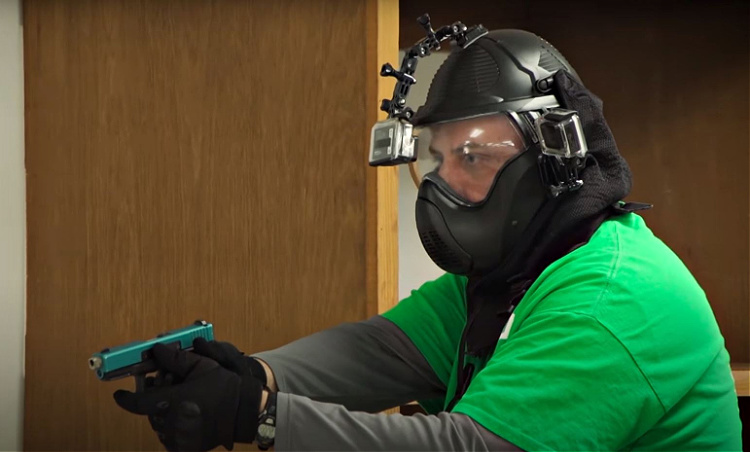 The setup: a marketing class at the local community college. Guess who was the only good guy with a gun.

For my “good guy” scenario, trainer Chris Cereno from Gun Talk Media put me in the middle of a school shooting, an all-too-real possibility in today’s world.

Mind you, this was my very first time doing this sort of thing, so aside from watching a few videos of others do it, I had no idea what to expect other than it was going to get intense really fast! And it did!

In my scene, I was the only guy with a gun, stuck smack dab in the middle of a classroom full of students (other role players) when shots rang out right outside the classroom door behind me. Mind you, in real life I would never have sat in the middle of the room, opting instead of the perimeter, but this was FoF training, so I went along with the program. 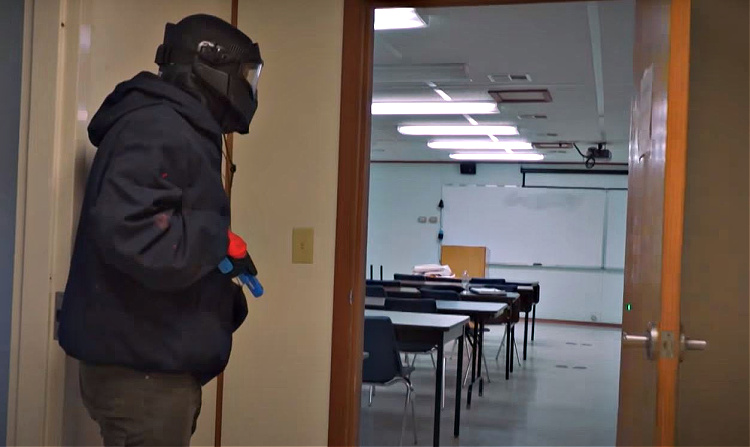 The bad guy lies in wait…

After the shots went off outside the door, I drew my gun and made my way to the edge of the room to give myself an angle on the door in case the bad guy came in, which I assumed he would. Because the shots had already gone off, I knew I had to go ahead and draw my gun because the deadly force threat had already presented itself. Plus, as Daniel Shaw points out in this excellent article on FoF training, “there’s no draw fast enough to deal with a gun that’s pointed at you.” I had to get my gun out before the bad guy came through the door.

Sure enough, a few seconds later, the door burst open, and in flopped the guy who had been “shot” outside, followed immediately by the bad guy, storming in, gun in hand. He started yelling that he would kill everyone if they didn’t tell him where the teacher was.

Apparently, he hadn’t seen me 15 feet to his left, so I raised my gun and was surprised to see that it was equipped with a grip laser, which shown bright green on his dark hoodie. BANG! BANG! BANG! BANG! I took at least four shots, striking him with all four, and he slouched to the floor as his gun clattered away. 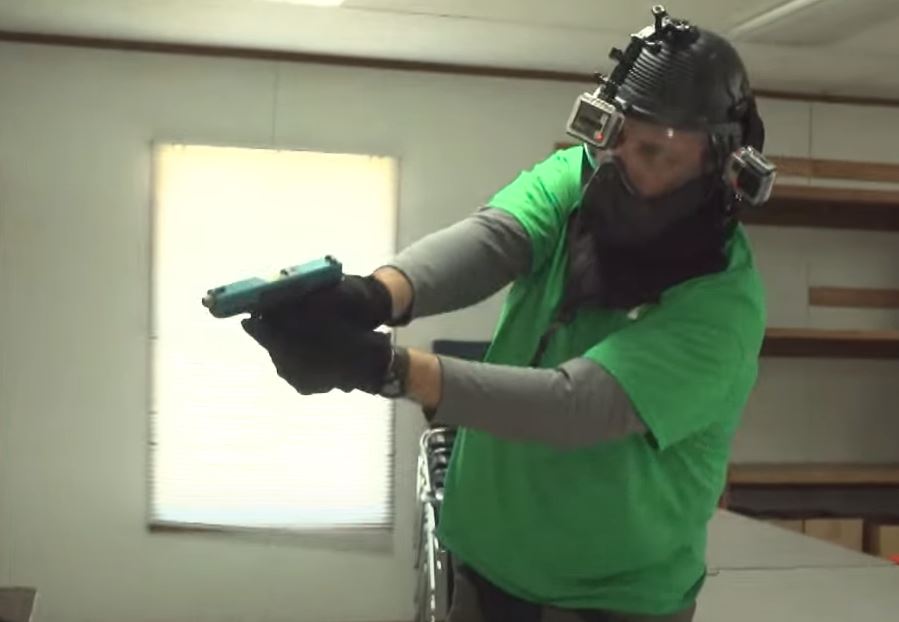 The bad guy looked dead. I had been told in the briefing that once he’s down, he’s out of the fight, but what do I do next? I kept my distance with my gun trained on him, but then I also needed to search for additional threats, so my attention was split until Chris called “End ex!” and the scenario was over.

I could breathe again. And let my adrenaline spike subside….

My heart rate returned to earth as I took off the sweaty protective headgear that completely covered my face so we could talk. Chris took me through a debrief and we ran back through the scenario to see if there were any lessons to learn.

There were plenty! Even though I had “won,” there were things I could have done differently. For example, there was a folding table set up by the door that I could have used as a barricade. In the heat of the moment, I hadn’t even noticed it because I was so fixated on shooting the bad guy. Sliding that into place, which I could have done one-handed, might have prevented the bad guy from entering the room in the first place.

There were a ton of tactical and strategic takeaways.

For instance, I was so focused on moving around to the edge of the room before the bad guy came in that I completely left the other students to fend for themselves in the middle. Instead, I should have practiced my verbal commands and issued clear instructions about what they needed to do, such as call 911 and move to another part of the room out of the potential line of fire.

Chris and I had a long talk about that. When we ran the scenario again with a twist, I issued the commands and got everyone safely into an adjacent room before the bad guy entered, where I shot him again. Yes, I won both scenarios. I might be a little competitive. 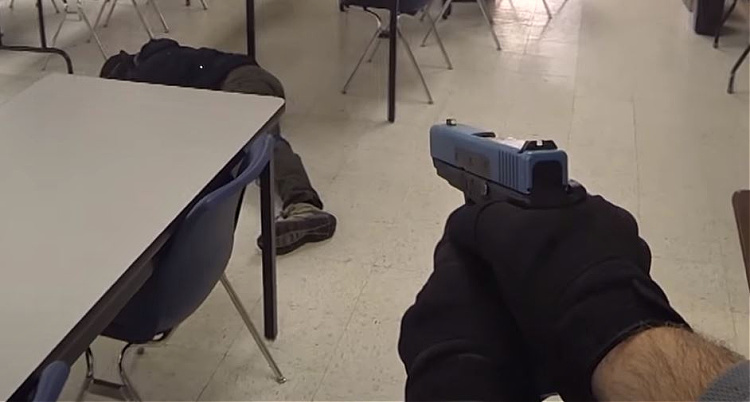 Stay alert! The scenario isn’t ever until the instructor calls “End ex!”

The biggest overall lesson that I learned from FoF training?

It changes the game entirely. Nothing comes any closer to the realism of what it will be like to face a gunfight in real life.

While I knew going into it that it was all a game and ultimately I would walk away unscathed, fly back home, and resume normal life, it was different in the moment, when I was tasked with saving my own life and the lives of others in the room from a man who had already demonstrated he would kill.

Perhaps going to guns would have been unnecessary if I had barricaded the door, preventing him from entering in the first place. Perhaps not.

Maybe there was another solution none of had thought of. Whatever the possibilities, I had won and saved all those lives, but was it the best solution?

Could I have done better? Maybe. That’s what Force-on-Force training is all about.