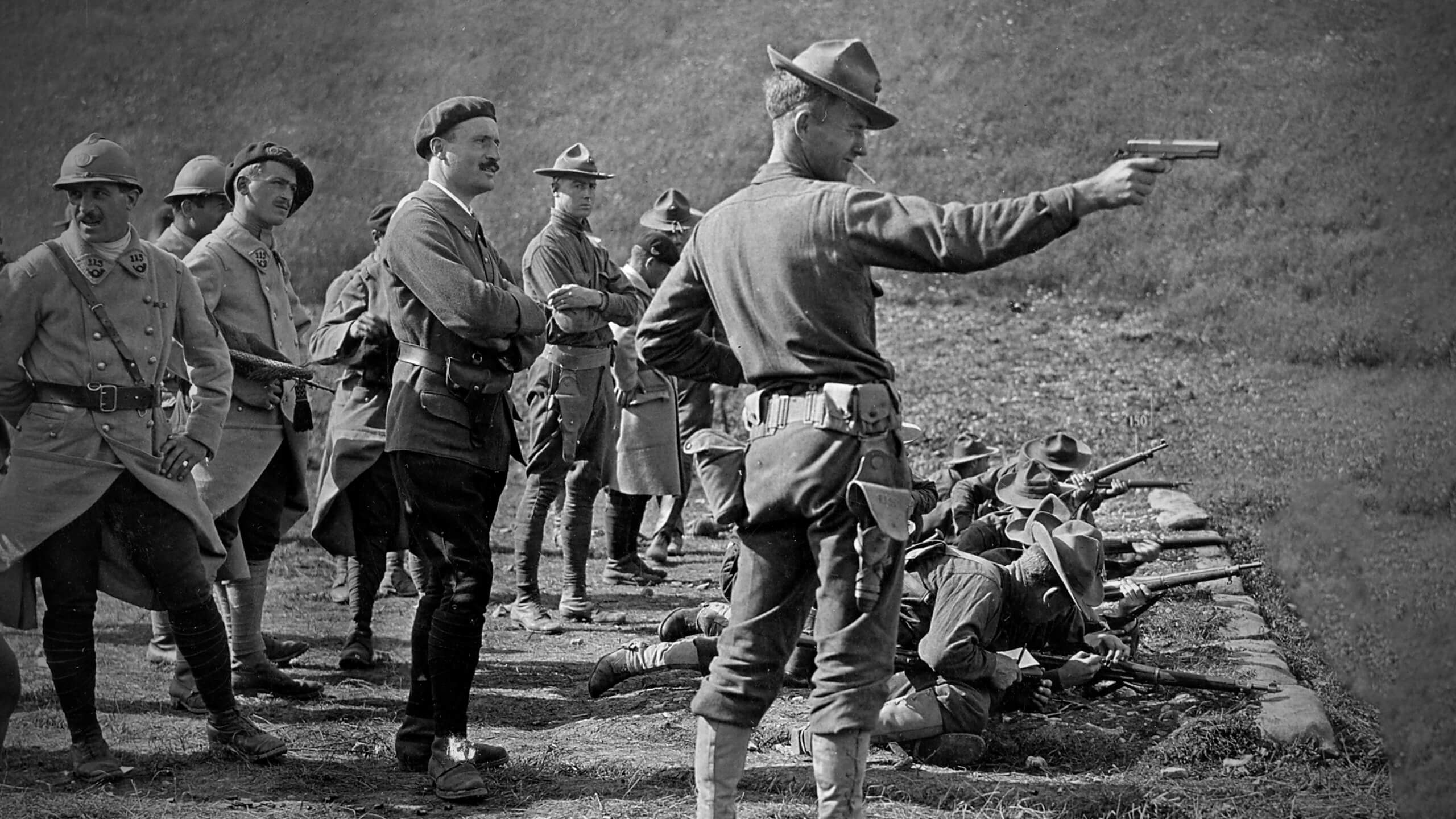 When World War I began in July 1914, there were less than 100,000 troops in the U.S. Army. Many of them were stationed outside the U.S.A., ranging from Puerto Rico and Cuba to the Philippines and China.

New weapons were in their hands, classic American firearms like the .30-06 M1903 Springfield rifle and the .45 caliber M1911 pistol. America was “armed” for the rigors of a new century, but the country was not ready for war.  America remained neutral before joining the Allied cause in April 1917.

In the meantime, there was an ugly dust-up with Mexico, ultimately showing the Army its need for more modern training. For example, Captain Julian Hatcher set up the Army’s first machine gun school in Harlington, Texas in 1916. The American military was slowly coming of age in the 20th Century.

Beginning in May 1917, Secretary of War Newton Baker ordered sixteen wood-frame “cantonments” for the National Army and sixteen camps for National Guard units to be quickly constructed.

Each Army cantonment was built with barracks and administration buildings, a hospital, several warehouses, and a target range. Each one was designed to be large so that they would house a new “Pershing Division”, which contained about 28,000 men.

National Army cantonments were constructed as:

By the end of World War One, America had raised and trained nearly four million men. The American Expeditionary Force suffered more than 320,000 casualties including 53,402 killed in action and 204,000 wounded. Added to that, the terrible Spanish Flu pandemic of 1918 infected more than 300,000 American troops, and killed more than 25,000. America paid a stiff price to become a global superpower.

Training to Win the “European War”

The pistol is deeply engrained in the American psyche as well as our culture. If one were to only listen to tales of the Old West, it would be easy to believe that every American was born with a six-gun in their hand.  The reality is that some of us needed a bit of training.

Many of the men who swelled the ranks of the U.S. military during World War One, both draftees and volunteers, had never held a pistol before.  Uncle Sam had quite a handful of handgun waiting for them:  the semi-automatic .45 caliber M1911. The M1911 was provided to as many American soldiers, sailors and Marines as the U.S. military could provide.

When America joined the war in April 1917, there were only about 75,000 M1911 pistols available. Additional manufacturing help was secured, and by the time of the Armistice in November 1918, an additional 640,000 M1911s had been built. America needed even more pistols, and this resulted in 300,000 .45 caliber M1917 revolvers being constructed by Colt and Smith & Wesson.

After some combat experience in Mexico and then in France, the U.S. Army quickly identified several qualities that they considered essential for a military pistol: accuracy, stopping power, rate of fire, and dependability. The M1911 pistol easily satisfied all of those requirements, and American military leaders considered the big .45 to be the finest combat handgun in the world.

Basic Training with the M1911

Pistol instruction for raw recruits was not limited to simply learning how to shoot the M1911.  U.S. Army doctrine called for “systematic instruction in the nomenclature and mechanism of the pistol.” The goal was to create a full unit of men with great expertise in shooting, cleaning, and troubleshooting the new automatic pistol.

The firer must be so familiar with his weapon that he will know at once the cause of any malfunction or stoppage and the means to be employed to remedy it.

Manual of the Automatic Pistol, Caliber .45 Model of 1911

While all of these are fine goals in training men for combat, America was quite new to building a large army in 1917-1918. Faced with a lack of pistols, as well as a lack of time, specific training was often kept to a minimum as troops were rushed to Europe. Once in France, many Doughboys needed additional instruction at combat training centers near the front.

Realities of a Handgun in the Trenches

US Army infantry and Marines were instructed to a high level of expertise with the M1903 (or M1917) rifle (both chambered in .30-06). Supporting troops were equipped with the M1915 Chauchat automatic rifle and the M1914 Hotchkiss machine gun (both were French-made and chambered in 8mm Lebel).  All of these weapons combined to provide the prime striking power of AEF infantry small arms.

Apparently, some Doughboys believed their M1911 pistol to be in the same class as their battle rifle.

In the Manual of the Automatic Pistol, Caliber .45 Model of 1911, produced by AEF Headquarters in France during February 1918, there are consistent reminders to the Doughboys that the pistol was to be used as an “emergency weapon”. As great as it was, the M1911 was not a machine gun or sniper’s rifle.  The manual states in plain language:

Too much stress cannot be laid on the fact that the pistol is an emergency weapon…It is solely for the personal protection of the bearer when the enemy is within very short range…The member of an automatic rifle or a machine gun squad who stops serving his rifle or machine gun to indulge in pistol practice at the enemy is wholly without a proper sense of his duty to his comrades.

Manual of the Automatic Pistol, Caliber .45 Model of 1911

The point in 1918 was well made, and still applicable today. The M1911 manual further advises that for most shooters, 25 yards is about the maximum range for the weapon. Combat shooting at longer ranges is merely wasting ammunition.

Even so, there were then, and there are now, certain M1911 shooters who seem to defy logic and firearm physics with their accurate shooting. I can assure you that I am not one of them. But even they will not forsake their rifle to shoot a pistol at long range. It was all part of the training that comes through hard-won combat experience.

American marksmanship, courage, and sacrifice, coupled with advanced small arms like the M1911, led the Allies to victory in 1918. “The war to end all wars” was over, at least for the moment.  Until the day that U.S. arms and American courage were needed to bring peace once again.