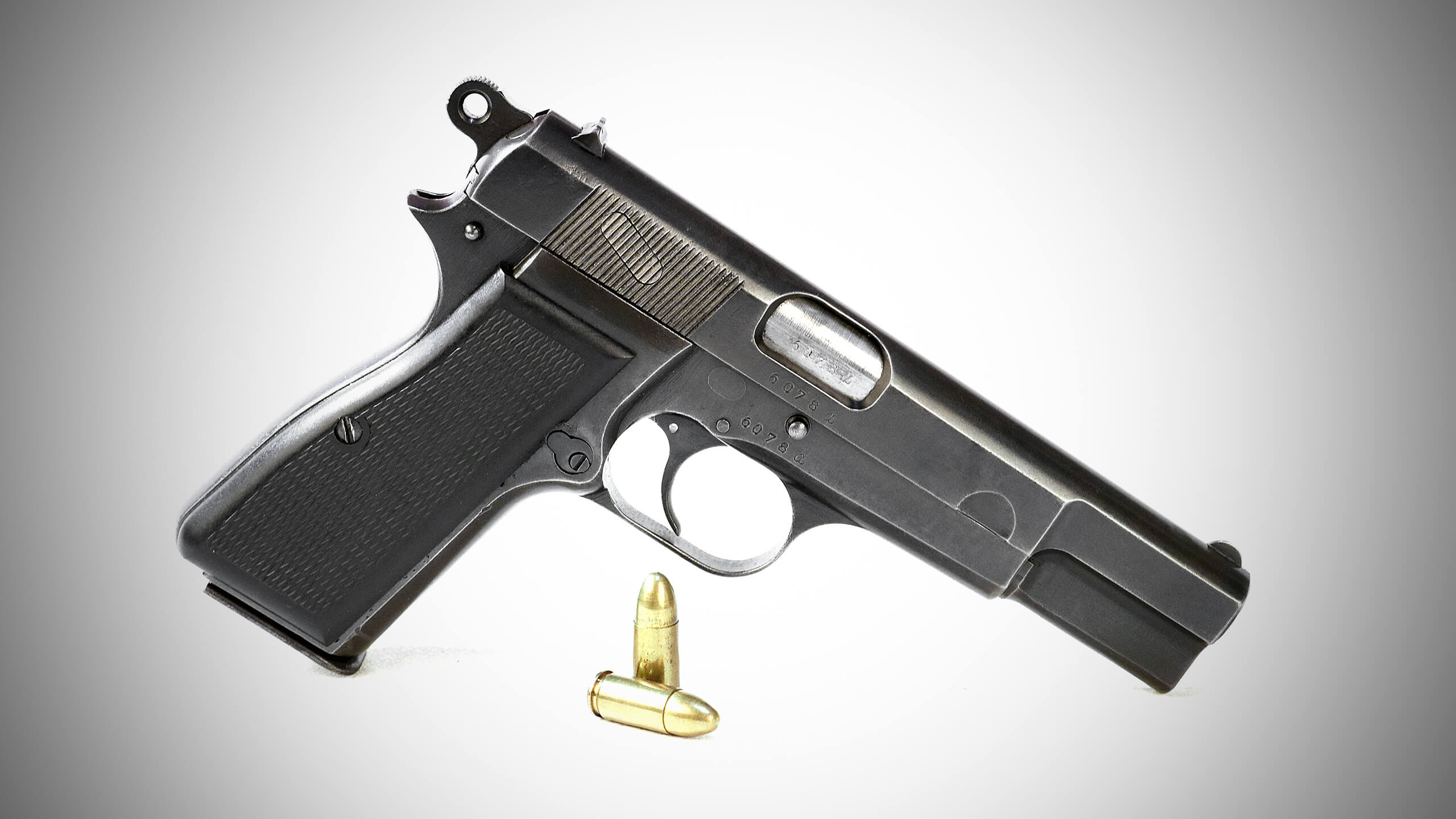 By Will Dabbs, MD

What is the archetypal combat pistol? A great many corn-fed Americans would submit John Moses Browning’s timeless 1911. I will admit that I myself have partaken of that Kool-Aid.

However, for pure unfiltered historical significance, the argument could be made that the P35 Hi-Power shaped the landscape for both military and civilian handguns more profoundly than any other design in history.

Although many people know the pistol as John Browning’s Hi-Power, the P35 handgun was actually a collaborative effort. John Moses Browning began the project but died in 1926 before it was completed. His protégé Dieudonne Saive completed work on the gun in 1935.

The pistol design that these two men created influenced practically every subsequent combat pistol as well as many of the civilian handgun offerings seen in the decades following its release.

Browning was the most prolific gun designer in human history, holding 128 patents at the time of his death. He designed every belt-fed machinegun used by the United States during World War II. The eponymous Browning Automatic Rifle (BAR) and the 37mm autocannon used on the Bell Airacobra fighter were his babies as well.

Dieudonne Saive was responsible for the FN Model 1949 semiautomatic rifle. His work also led to the development of the extremely prolific FAL rifle. The collaborative efforts of these two guys changed everything.

In 1921, the French government requested a new combat handgun that would carry 10 rounds of 9mm. Browning built the gun using his 1911 as a starting point. Saive developed a double-column, single-feed 15-round box magazine and mated it to a modified FN Model 1903 pistol.

After a little back and forth over patents, Browning’s son Val offered what would become the Hi-Power four months after his father’s death. That early pistol was titled the Grand Rendement, which translates to “High Yield.”

By 1935, Saive had the holy melding perfected into the GP-35 Grande Puissance or “Hi-Power.” The end result included Saive’s revolutionary box magazine now carrying 13 rounds so as to keep the pistol from having an unduly bulky grip. After all that effort, the French ultimately passed on the GP-35, selecting instead the indigenously produced Modele 1935 pistol.

While the French took a pass, the rest of the planet thought the Belgian Hi-Power was the bee’s knees. By the time the Germans overran Belgium in 1940, 56,000 copies had been sold. The Germans forced the Belgians to keep churning the guns out under occupation, calling their particular version the Pistole 640(b). The “b” stands for Belgium. The Nazis consumed some 65,000 Hi-Power pistols, particularly among Waffen SS and Fallschirmjagers.

Saive escaped to London with the drawings for the Hi-Power in mid-1941. He went to work at Enfield in Cheshunt, England, preparing the Hi-Power for production by the Allies. In April of 1943, the Chinese requested 180,000 Hi-Power pistols for use in their bitter struggle against the Japanese.

The Chinese contract was given to the Canadian firm of John Inglis and Company. The Chinese stipulated that the guns include a wooden shoulder stock-cum-holster similar to that of the C96 Broomhandle. The Broomhandle commanded a rabid following among Chinese troops who affectionately referred to it as the “Box Cannon.”

A great many of these guns were ultimately diverted for use among Allied troops fighting in Europe. The first to see action were used during Operation Varsity, the airborne assault across the Rhine in 1944. The Hi-Power subsequently had the dubious distinction of being the only production firearm to see common issue among both Allied and Axis forces.

The Hi-Power came in two broad variants. The simpler one featured basic fixed sights. The more complicated version had a grip slotted for the detachable shoulder stock and a ramp-adjustable rear sight optimistically calibrated out to 500 meters. The holster stock featured a web belt hanger.

The beating heart of the Hi-Power is its linkless short recoil operating system. If you’ve never seen the entrails of a Hi-Power before, just strip down most any modern combat pistol and take a gander at the way the barrel interacts with the slide. That’s a Hi-Power. This inspired cam mechanism locks the barrel and slide together at the moment of firing yet allows these two components to separate under recoil to effect the action cycle.

Many to most Hi-Power pistols include a controversial magazine disconnect safety that takes a bit of a toll on the personality of the single-action trigger. Most German wartime guns eschewed this feature.

Mr. Saive’s double-column, single-feed high-capacity magazine is now the accepted standard the world over. The wizards who developed the Springfield Armory Hellcat somehow crammed the same number of rounds into substantially less space, but the basic concept is now ubiquitous.

Browning’s Hi-Power is a uniquely delightful tactical handgun. I’ve got big monkey fingers, and the Hi-Power fits me perfectly. Normal folk do well with the gun as well.

The single-action trigger is quite nice. The magazine release and thumb safety are right where Mr. Browning put them on the 1911. Spent magazines do not fall free with the magazine disconnect in place, but the baseplate provides a handy gripping point.

Hammers come in both ring and spurred varieties, though the beavertail is a wee bit stingy. Let your grip get too high, and the Hi-Power can give you a nip to your webspace. Regardless, the Hi-Power remains my favorite WWII-era pistol.

The Hi-Power was ultimately adopted as the standard service pistol by more than 50 armies. It has seen widespread use among military and law enforcement agencies in 93 nations.

Muammar Gaddafi died in the company of a gold-plated Hi-Power sporting his likeness on the grips. Even this deep into the Information Age, the classic Hi-Power remains competitive. Its apparently perfect linkless action and high-capacity magazine inspired just about everything you see today.

Special thanks to www.worldwarsupply.com for the replica gear the author used to outfit the period reenactor.