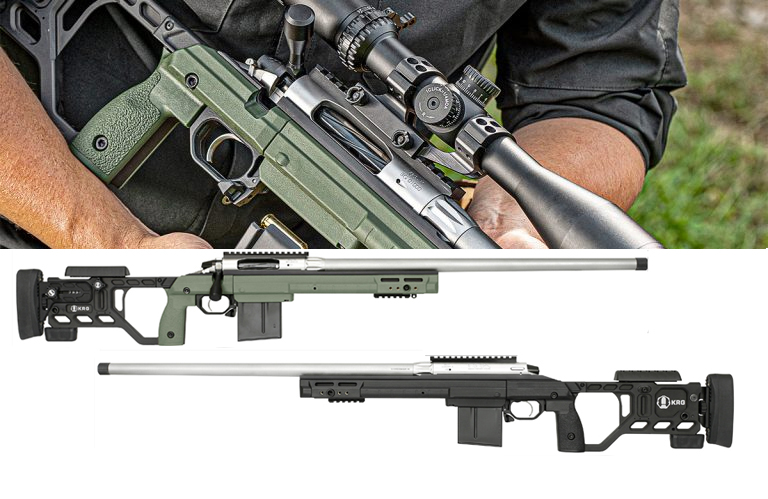 According to the initial RRA release, the RBG bolt gun series was designed to deliver a turn-key precision rifle option for buyers interested in long-range shooting and competition.  Elements of the bolt gun include their proprietary action, stainless steel barrel, KRG chassis, two-lug bolt with oversized bolt handle, and either a Triggertech or Timney trigger.

Among its many features are a quick-adjust comb and adjustable length-of-pull. This is a necessary option for a good precision gun for reasons of fit and comfort. You guys with orangutan reach will lay behind that scope far differently than your counterparts with T-Rex arms. These differences dramatically affect your ability to remain behind the optic during recoil.

You cannot have a Rock River Arms bolt action without the action. The RBG-1S centers around a Bighorn Arms TL-3. It’s a stainless steel receiver with an integrated recoil lug, small shank thread tenon, and interchangeable floating bolt head.

RRA chose an action from Bighorn Arms as the heart of their first production bolt gun.

“An extractor breaking will never be an issue with the RBG-1S because it has one made with a hardened steel blade that is supported by two rails in the bolt face. It is wide and grabs a large section of the cartridge case rim. Since it rides on two steel rails in the bolt face, there is almost zero chance one will break. Unlike the common spring-­steel extractor that has no external support while the case extracts, this steel extractor is further reinforced by the two steel rails. It will tear through the case rim long before the extractor itself gives way.”

The Wilson stainless steel barrel begins as a blank, though final chambering and finishing are accomplished by Rock River Arms themselves in their manufacturing facility. This is intended to provide more surety over final chambering tolerances. The barrel is secured to the TL-3 action with a barrel nut, which threads to the receiver and tightened down after appropriate use of headspace gauges.

This measure will provide the rifle owner with the option of switching chamberings or re-barreling the weapon.

A little more about it:

The Kinetic Research Group Whiskey-3 chassis is an aluminum-bedded design that features the following:

• Picatinny rail and M-LOK slots near the muzzle

What a coincidence. AICS magazines are available at GunMag Warehouse!

Read a review of the RBG-1S on the Guns & Ammo website.

Watch a video explanation of the RBG-1S during its soft launch in 2019.

RRA advises that “Included with the [the Rock River Arms bolt action RBG-1S] is a 20 MOA base. This allows the scope to be zeroed to prevent elevation runout for long-distance targets. Standard scope base holes are drilled into the receiver for shooters who desire conventional ring mounts.”

Additional specs are listed below.