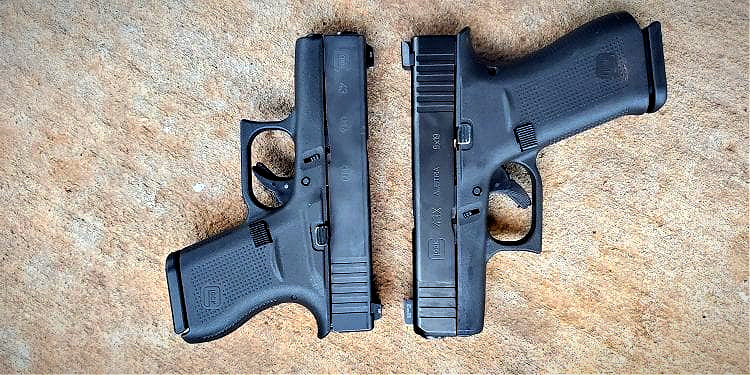 What is the difference between the Glock 43 vs 43X? How are they the same? Are the 43 and 43X slides identical?

Glock’s model-naming habits can be confusing. After all, there’s no correlation between the model number and the gun’s size or caliber. Unless you have their patent numbers memorized you’re out of luck understanding the process.

Then there are guns like the 43 and 43X which sound like they must be basically the same model and are not. Why does the 43X simply have an “X” added to its designation?

Let’s clear up some confusion, at least on these two models, with a quick tutorial on two popular guns from the polymer pistol giant’s product line.

When the Glock 43 was officially launched in 2015 it was met with immense excitement. For years the gun public had asked when a single-stack 9mm would come from Glock and it was finally here. At the NRAAM 2015 Glock 43 media launch party, the range was festooned with G43 stickers, banners, and signs. The company had provided everything from shorts to lanyards celebrating the single-stack pistol. Overall there was an air of excitement in the gun media over the unveiling of something unique and truly new from Glock. For gun owners everywhere there was curiosity—that and purchases made sight and touch—unseen.

The G43 is far smaller than the popular compact G19. Since both are 9mms made by Glock for concealed carry they’re a decent initial side-by-side comparison to make, so here it is:

For a lot of gun owners, the G43’s diminutive frame makes it a good choice for concealed carry. Unlike the G19 its grip doesn’t throw the gun off balance when it’s loaded and holstered. It is 100 percent true to say it is well-suited to concealment.

It’s also accurate to say the G43’s narrow frame and short grip can make it more challenging to shoot well.

Yes, this gun is great if you have tiny hands, but with larger hands, it can be frustrating. All guns do not fit all shooters. Our hand sizes and finger lengths are different. Using a gun that is properly fitted to your hands and fingers is more important than you might realize. Just because a gun is lauded in the gun world as the greatest blaster since the 1911 won twelve world wars doesn’t mean it’s the best gun for you, specifically. Take the time to try out guns and check fit prior to buying them.

The good news is it isn’t impossible to practice on any and all guns to improve your skills with them. Putting effort into your training is always a good idea and it can make tiny little pistols easier to run accurately. Some guns will always be tougher for you to fire precisely compared to others, but there’s always room for improvement. 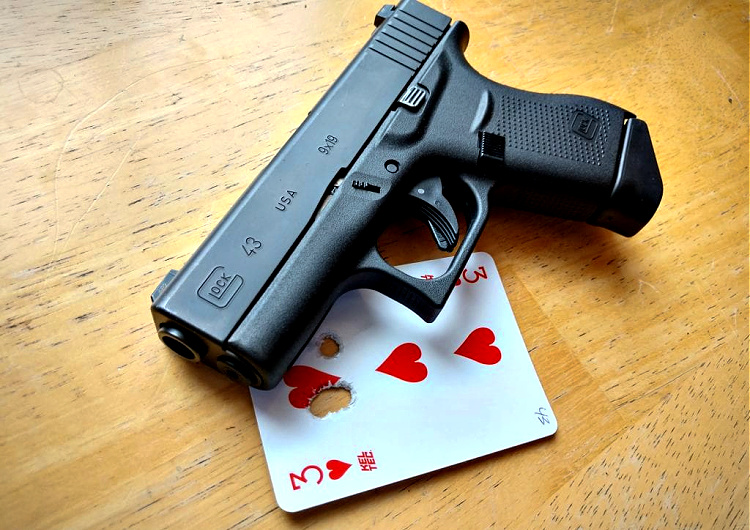 Five shots from five yards with no timer: you can get a single-hole group from the G43 but it tends to take more time and care than with the G43X. That, and there always seems to be at least one flyer. Photo: Kat Ainsworth Stevens.

On the range, the G43 behaves exactly as expected by consistently cycling all manner of ammunition and generally producing good groups. It is not as precise as some Glocks but it’s generally accurate.

The G43 can be easily concealed in a wide variety of clothing and its lighter weight also means it won’t tip over or drag down shorts or yoga pants. Depending on your body shape it can also perform nicely for times when deep concealment is a must in non-permissive environments.

Although it isn’t as small as some, this is still a tiny gun. It may not fit your hands well and might be best left as a Back-Up Gun (BUG) or summertime Every Day Carry (EDC).

When it comes to accuracy the G43 doesn’t cut it as a precise pistol so if you’re looking for mind-blowing performance from your carry gun, this isn’t the gun for you. Whether your EDC needs to be beautifully precise is a matter of some debate.

Finally, the G43 only holds 6 rounds in a standard magazine. That isn’t much mag capacity and may be enough to make you balk from carrying it. If you opt to carry spare mags make sure you are spending time working on your mag changes. Speed matters. 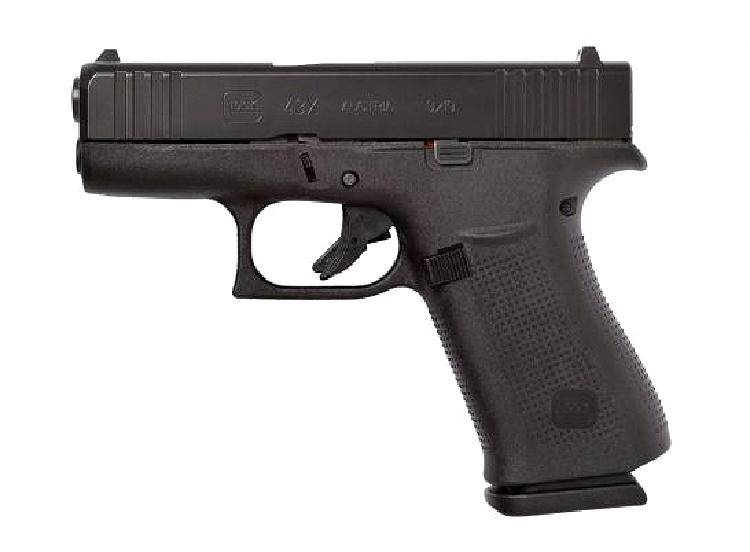 The G43X hit the market in 2019 as part of Glock’s then-new Slimline product line. Not to be mistaken with single-stacks like the G43, Slimlines are staggered and neither single nor double-stacks. The result is a narrow gun than the double-stacks but one with more capacity than your average single. It’s a sub-compact pistol made to up the gun owner’s concealed carry game while delivering Gen 5 precision.

Thanks to their similar model names and not dissimilar purposes it’s a good idea to check out the Glock 43 vs 43X specs side-by-side. We’ll list them both here so you don’t need to scroll back and forth to compare dimensions:

Based on dimensions you can see the G43X is slightly larger than the G43, but does it matter? Do tenths of an inch here and there make a difference? 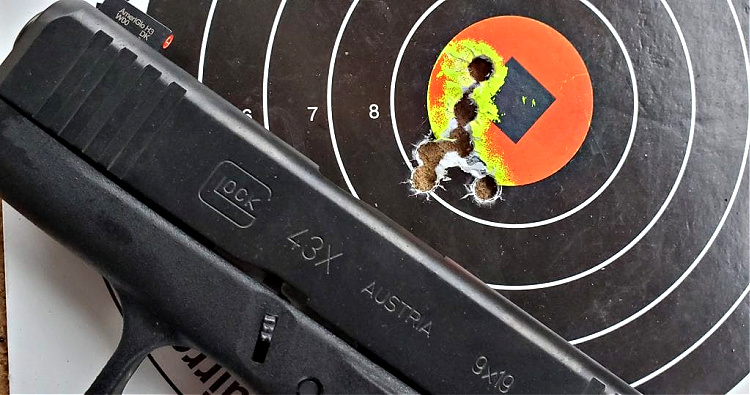 Ten shots plus one chambered for 11 shots from ten yards at a steady pace. The G43X is a solid performer. Photo: Kat Ainsworth Stevens.

The slightly larger size of the G43X makes it a significantly better fit for larger hands.

That alone is enough to recommend it to many shooters but when you add in its Gen 5 parts it becomes the clear winner. The G43X has generation updates like a match-grade Glock Marksman Barrel, reversible magazine catch, and front slide serrations. The slide stop lever is also ambidextrous, the mag well is flared, and mags have enlarged floor plates. Overall there are 20 design changes to Gen 5 Glocks and the 43X benefits from them all.

The additional height on the G43X is just right to make the gun a good fit for larger hands. Photo: Kat Ainsworth Stevens.

This a model of Glock that fits a wider range of hand sizes than most models manage to achieve. Its Slimline frame helps it hit that sweet spot and its design is stellar.

On the range the G43X cycles all weights of 9mm well. As for accuracy, this pistol isn’t just accurate—it’s precise. Groups produced with multiple brands of ammunition are nothing short of sexy.

It can be concealed in everything from cargo pants to skinny jeans with tank tops. The G43X is a well-designed, fantastically executed model.

If you have truly large hands, the G43X might still be too small for you. It also has a barrel length that matches the G43’s barrel length which does affect its balance somewhat.

The 10-round mag capacity isn’t bad but also isn’t the 15 or 17 rounds many gun owners prefer. Worrying about a mag change when your life is on the line does add a layer of stress, after all. (Maybe go check out the 50-round drum magazine over at the store.)

Its additional height over the G43 means it isn’t as good for deep concealment and makes it a less perfect fit for smaller-framed carriers. 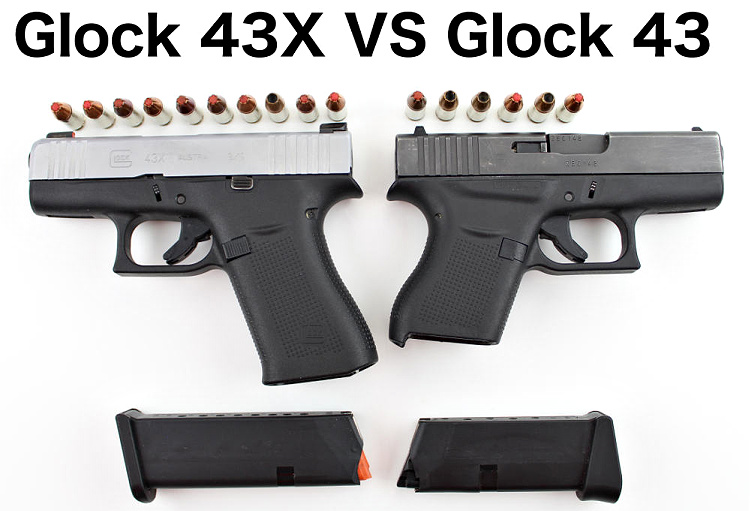 Unpopular opinion: there is no winner.

Both the G43 and G43X fulfill a niche and work well for different gun owners. No, the G43 is not obsolete. We all have varying hand sizes, skill levels, and concealment needs so one gun does not rule them all. It comes down to personal preferences, so while it would be easy to state the G43X is a superior pistol due to its single, ragged-hole five-shot groups in my hands—the same may not be true for you.

These guns are not interchangeable.

The slide of the G43 is not the same as the G43X and their holsters are not interchangeable (neither are their magazines).

The G43 is technically a Gen 4 and the G43X is a Gen 5, so their internal and external parts and features vary quite a bit.

If your hands are smaller or you need a pistol for deep concealment the G43 may be a nice fit for you; if your hands are larger and you’re in the market for a good EDC, the G43X might be best.

Figure out what you require from your concealed carry gun and try out the options before buying. Maybe the G43 will help you conceal where most others fail; maybe the G43X’s added precision makes up for its slightly larger size.

Whichever Glock you choose, train. Train as though your life depends on it.