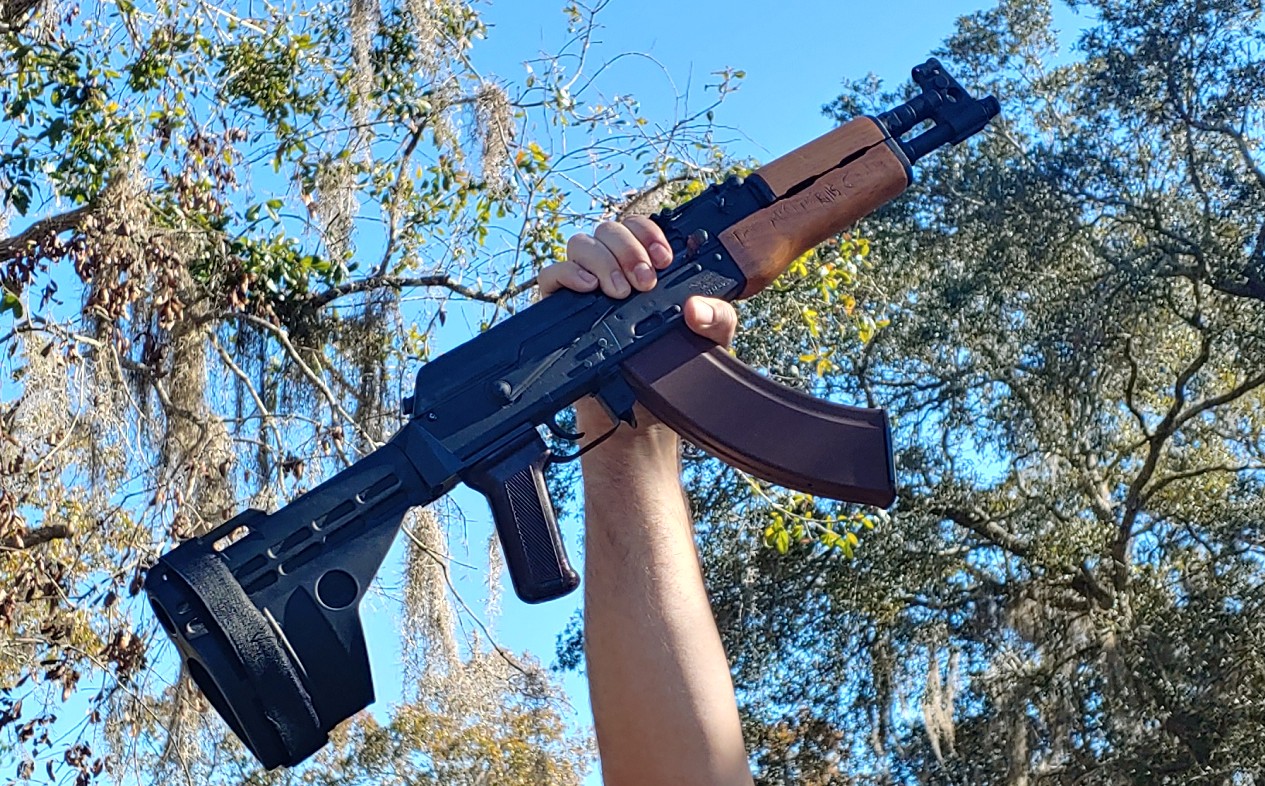 Soulja Boy, yep it all started with Soulja Boy. You see, his dedication and love of the Draco AK pistol have made the gun a popular option firearm in rap and hip hop music. The Draco has replaced the Glock, the Mac, and the Tec 9 as the chosen firearms of rap music. Soulja Boy started it with the song “Draco” in 2016 and then “Hit ‘Em with the Draco” in 2017. Hell, in 2017, Soulja Boy was arrested for having a Draco in California, a gun prohibited by the state’s onerous firearm laws. 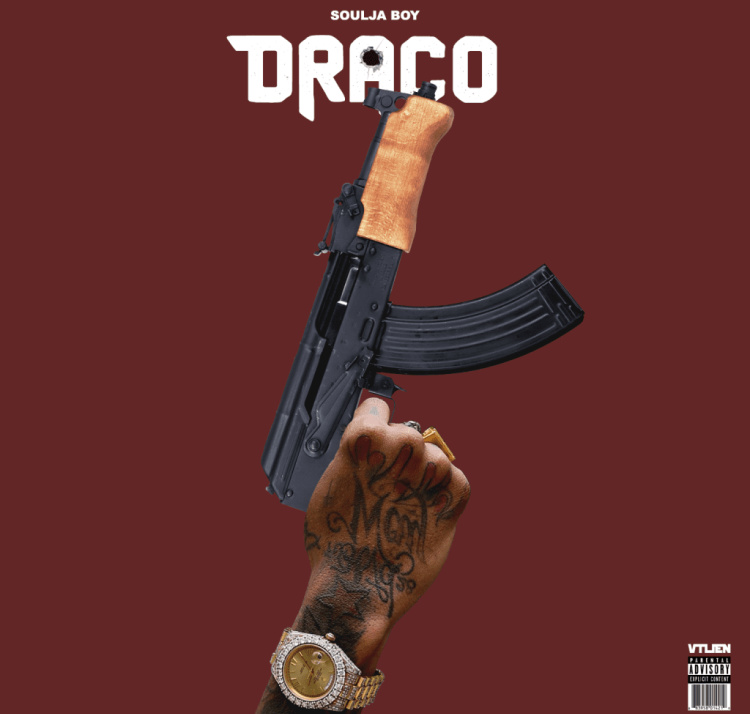 Soulja Boy has started more than stupid dances. He intro’ed the Draco to hip hop culture.

What Soulja Boy started has gone on to make the Draco a prominent figure in rap music. Dozens of references to it exist in rap, and it fills music videos. The Draco even popped up in a Jay-Z track showing that even the godfathers of rap aren’t immune to the Draco’s draw. The Draco’s hip hop legend has driven sales significantly, and the firearm remains extremely popular. Dozens of songs, hundreds of lyrics, and cameos in rap videos, both big and small.

The name is appropriate. Every shot fired results in a massive muzzle flash that resembles the breath of the mighty Smaug.

The Draco is at its core a Romanian AK with a chopped stock and barrel. This classifies the AK as a pistol and not a rifle. Dracos come in various sizes, and what you see in the image below is an OG Draco sporting a 12.25-inch barrel. 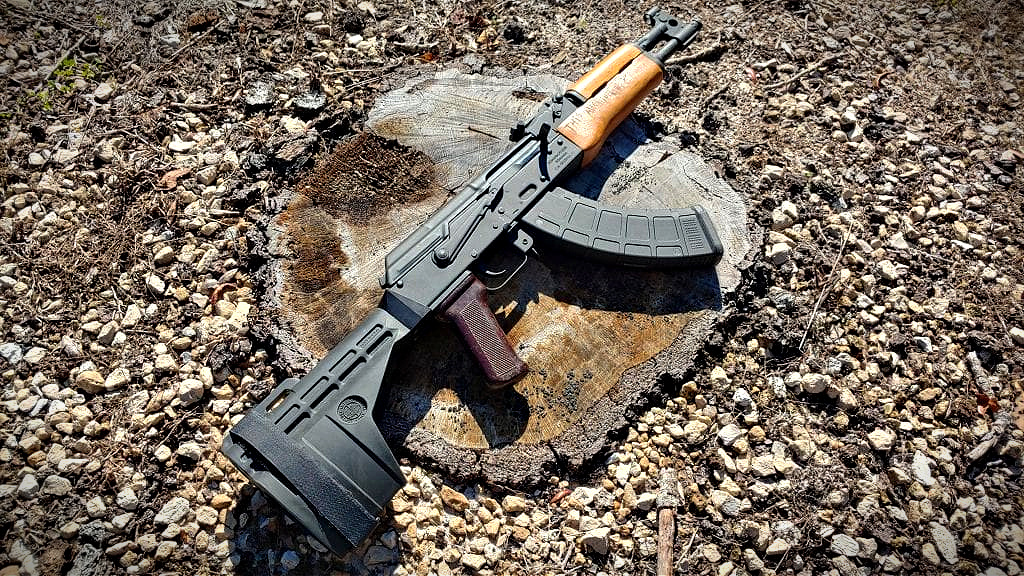 The brace equipped Draco is an affordable and effective firearm.

Short barreled semi-auto rifles can usually run into some kind of issues with reliability. The AR, for example, took some real engineering to get the short-barreled variants to work right. However, the AK is a weapon crafted by Orcs and not Elves. It doesn’t care that it lacks a stock or that the barrel has had almost 4 inches popped off of it. It goes boom without protest.

The Draco is a little monster, and as a pistol, it’s admittedly unwieldy.

This allows the Draco to join the ranks of famed rap guns that are equally hard to wield, like the MAC and TEC series pistols. They are more intimidating than useful, but like the previous two, they can be a blast to shoot. 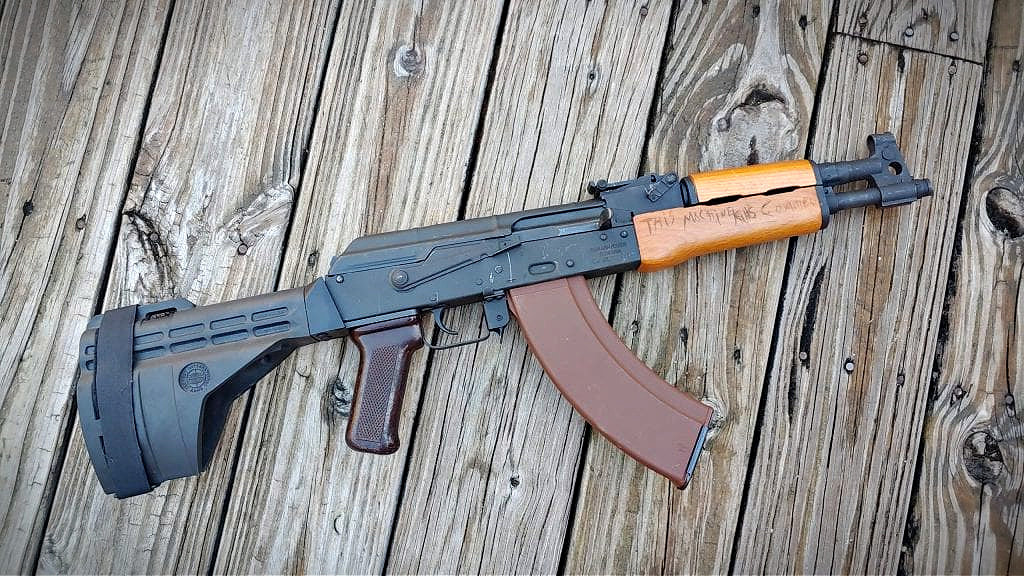 Short and sweet is the nature of the Draco, short… sweet…. and loud.

The extra noise, concussion, and muzzle flash generated by the Draco also add to the fun factor of the firearm. The phrase “turning money into noise” has never been more applicable than with the Draco.

Do you ever want a concussion? Shoot a Draco at an indoor range.

Wanna see what hearing loss is like? Don’t double up on ear pro when you do it.

Down and Dirty with the Draco

The Draco is like any other rifle caliber pistol in its ability to accept a brace. This model has an old school SB 15 brace attached to the gun and held in place by the pistol grip. This friction fit seems silly but works. It also makes the Draco much easier to handle and a little less obnoxious.

The Draco is a 7.62×39 weapon that works with all standard AK magazines. From the Americanized P-MAGs to the uber tactical XTech MAG47s, and down to KCI magazines, Bulgarian magazines, and beyond. They will even accommodate drums for that 20th Tommy gun look. 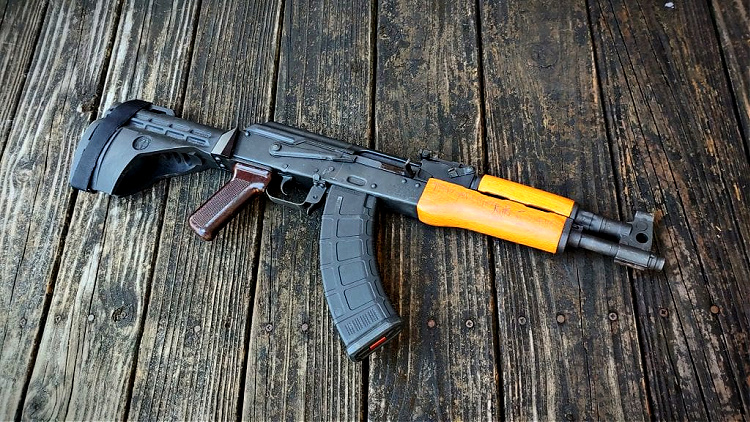 The ole Draco can use any standard AK series magazine.

The short 12.25-inch barrel has some detriment to the ballistic performance of the round, but not as much as you’d think. You lose around 150 feet per second or so from the 16 to 12.25-inch barrel. The AK and it’s 7.62 round is a great SBR option and does wonders with modern ballistics.

The pistol variant is unwieldy. Besides being loud and harsh, the Draco has some substantial muzzle rise. The import variant means there are no threads to attach a muzzle device to. Well, there are, but a welded nut prevents you from using them. A compensator or muzzle brake of any kind would make a big difference in how the weapon handles. It would not only help with muzzle rise but could divert blast and concussion. 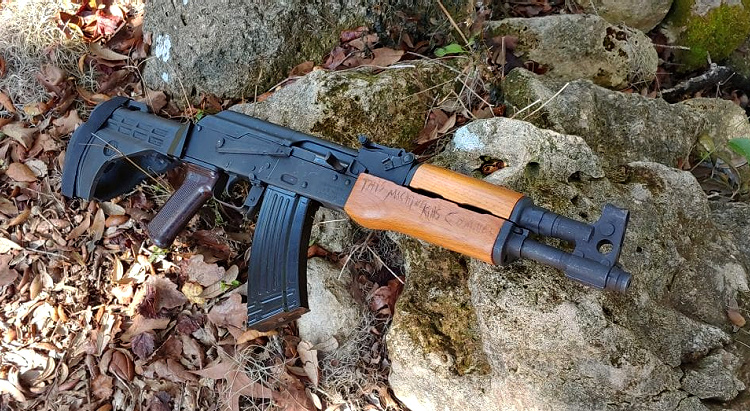 The muzzle blast is intense without a muzzle device.

An AK pistol is not a marksman’s weapon by any means. It has the same cruddy iron sights as any AK, including an optimistic rear sight marked out to 500 yards. The front sight is a hooded post, and an AK tool can make easy adjustments. The sight radius is nearly nothing. It’s remarkably short and won’t add much to your precision. 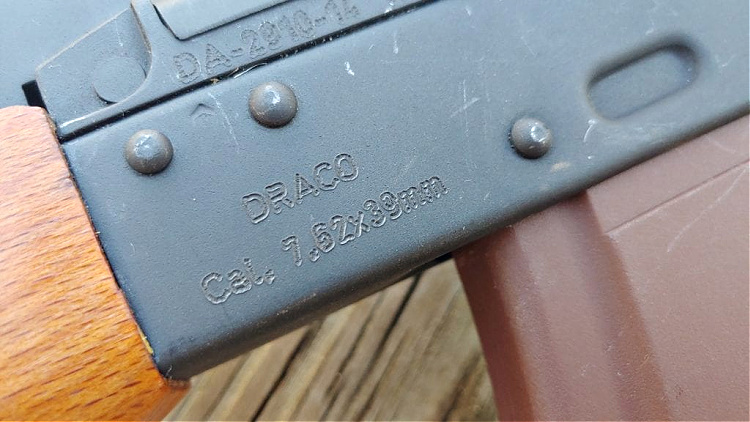 Century Arms’ penmanship is without flaw…

The Draco is a hundred-yard gun.

Beyond 100 yards, the fact that it lacks a stock, decent sights, and is an AK rears its ugly head. I can ring a gong at 100 yards, but I can’t ring it quickly. The muzzle rise and flash make finding that tiny rear sight between shots a challenge. It’s a hobbled gun, but boy, oh boy, it’s a fun-to-shoot firearm.

On the ergonomic front, the Draco is pure AK. The side-mounted safety is a hassle, the right side reciprocating charging handle is a challenge, and the wood handguard gets nice and hot when firing for extended periods. 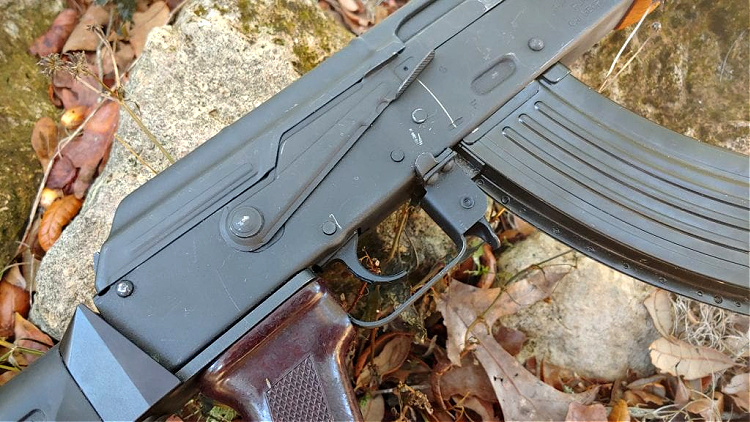 The ergonomics are still very traditional and AK like.

With all that said, I still enjoy the Draco. The feeling of working the action, the way an AK mag locks into the gun, and even the sound the safety makes as it slides onto fire. There is something about an AK no other gun has replicated.

Rap music lyrics rarely express the safe and legal use of firearms. But even though that’s true, neither does any other music genre. Toby Keith has a country song about a biker outlaw shooting it out with the cops.

Gun nuts (and I say that as one) love movies like John Wick and Heat, and neither of those show the safe and legal use of firearms either. Separating fantasy from reality isn’t hard to do, and while the music might not be for you, the guns and the right to keep them should be. 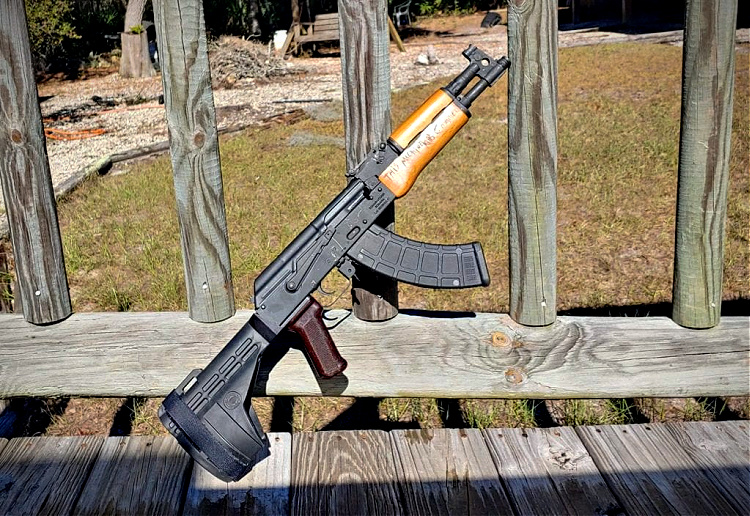 The Draco has become hip hops chosen blaster, and the gun community should take note.

Every gun owner, regardless of the gun they own or the reason they own it, can be a second amendment activist and help guarantee the right to keep and bear arms remains intact.