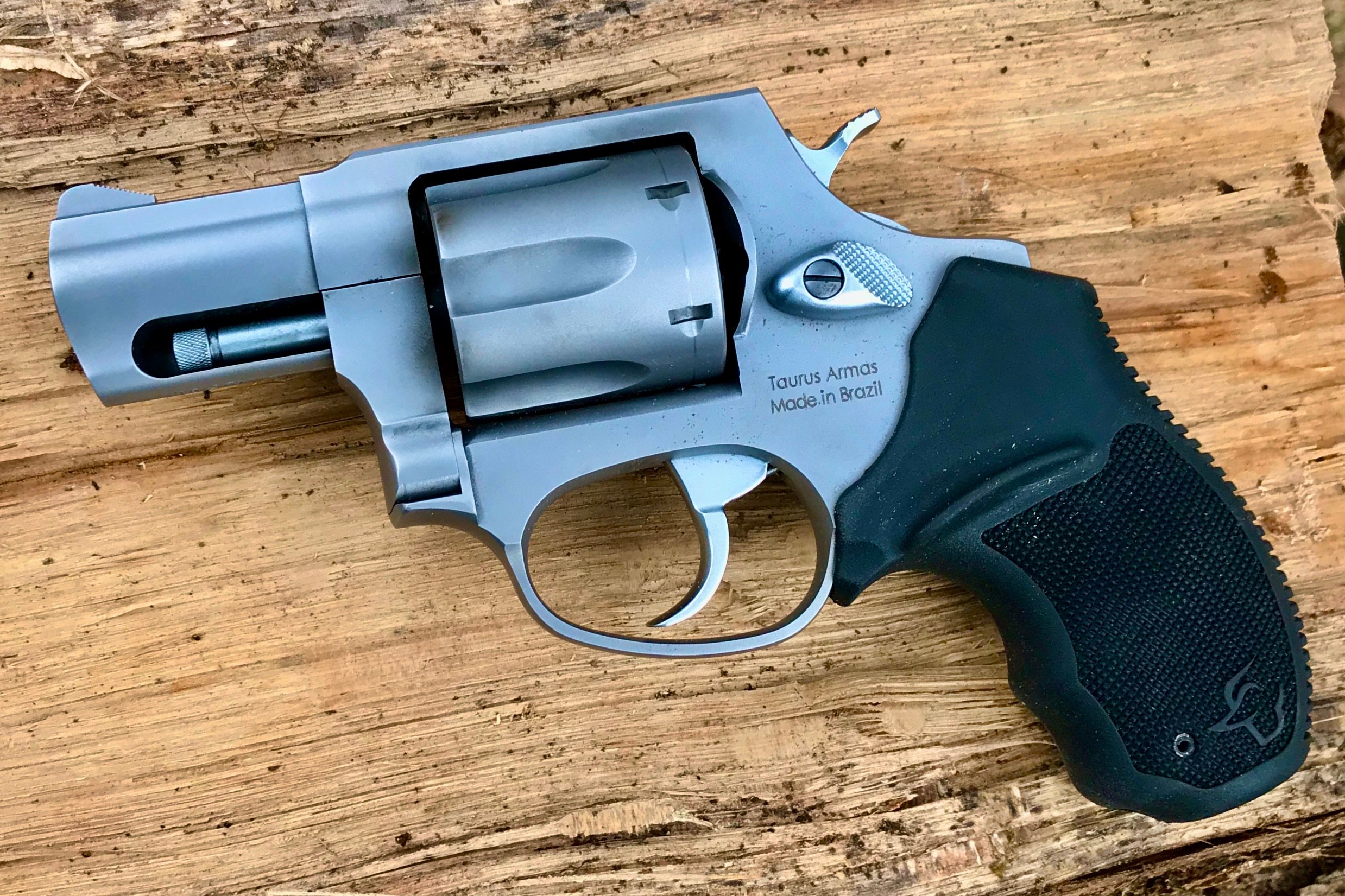 Does it seem a bit odd to find GunMag Warehouse writing about a gun that doesn’t take a magazine? No worries. We’re fans of the wheel-gun, too. There’s a place for revolvers in the firearms pantheon, and the Taurus 856 is a solid option for anyone looking for a budget-friendly six-shooter that can hold its own with much pricier competition. 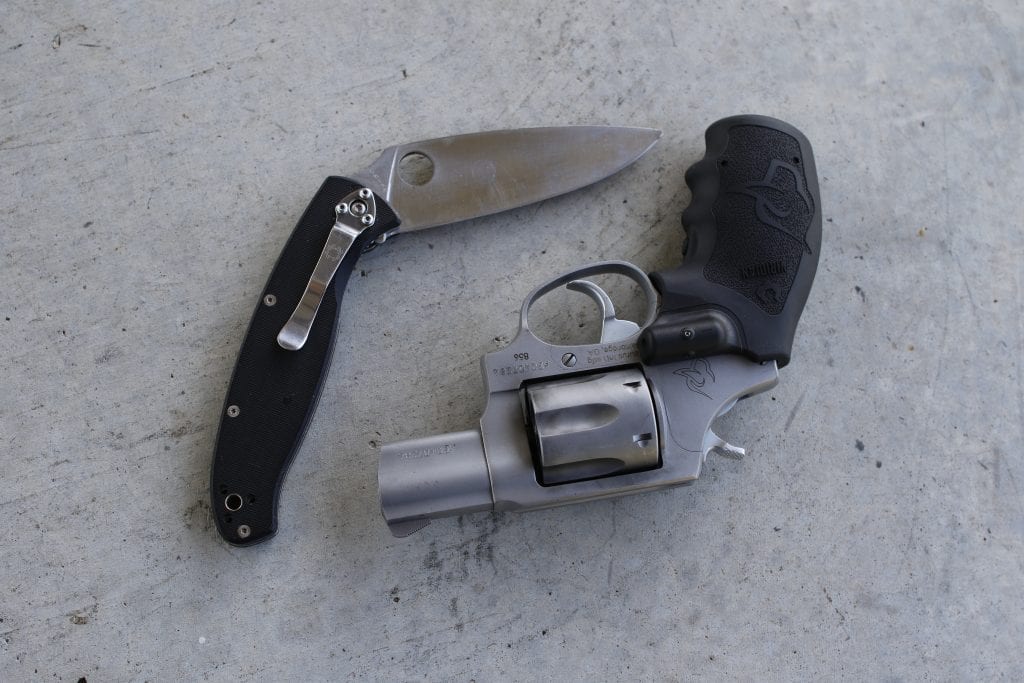 The Taurus 85 has been around for eons. There have been many variations on the theme. The 856 adds the extra round in what is typically 5-shot territory. In fact, the 856 fits many of the holsters made for the Smith J-frame revolvers, but with the added benefit of that sixth shot.

This particular 856 is stainless. For easy cleaning and effortless maintenance, stainless is a good option. The Taurus is not a high-polish stainless, but it will still catch light. That’s par for the course—this isn’t a gun that’s meant to blend into camo or disappear in dark shadows. 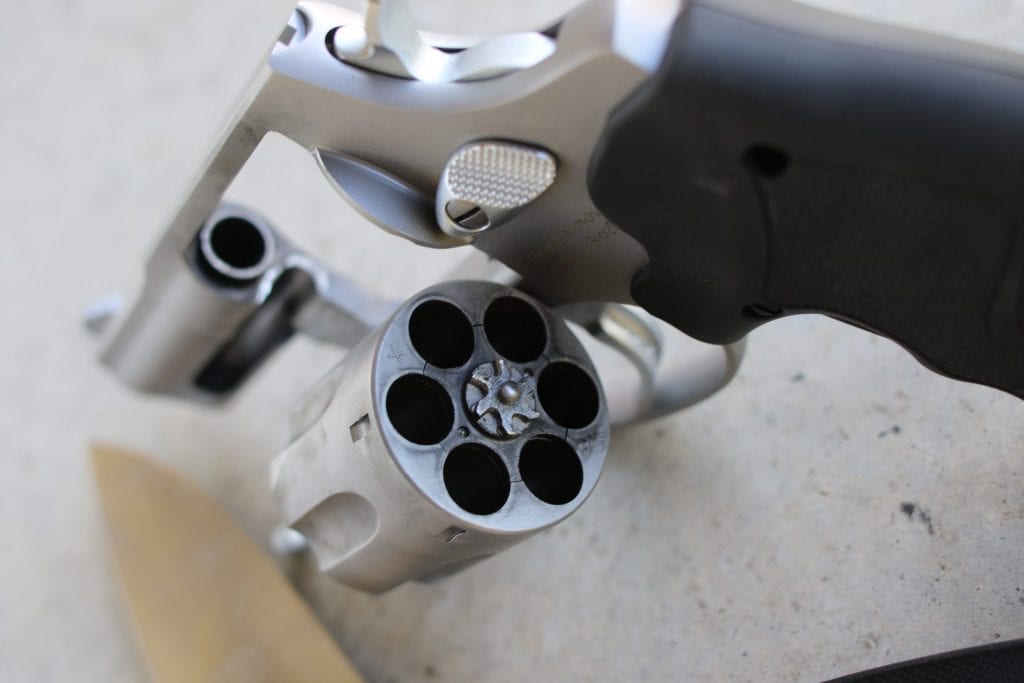 Ejection is consistent and easy, thanks to the deep plunger. You may have to spin it as you plunge. Brass may bump the grip.

The operation of the 856 should be instantly familiar to anyone familiar with the basic operation of a revolver and is intuitive for anyone who isn’t. The hammer will function in traditional single-action style (breaking just over 6 pounds), or with the pull of the double-action trigger (topping out over the 10-pound mark on my scale).

And that’s still the appeal of a solid revolver. Make no mistake—this is a rock-solid revolver. The Taurus holds its own with much more expensive guns in this class. When you pull the trigger, the cylinder rolls and the gun fires. This dependability is why so many people still carry revolvers today. 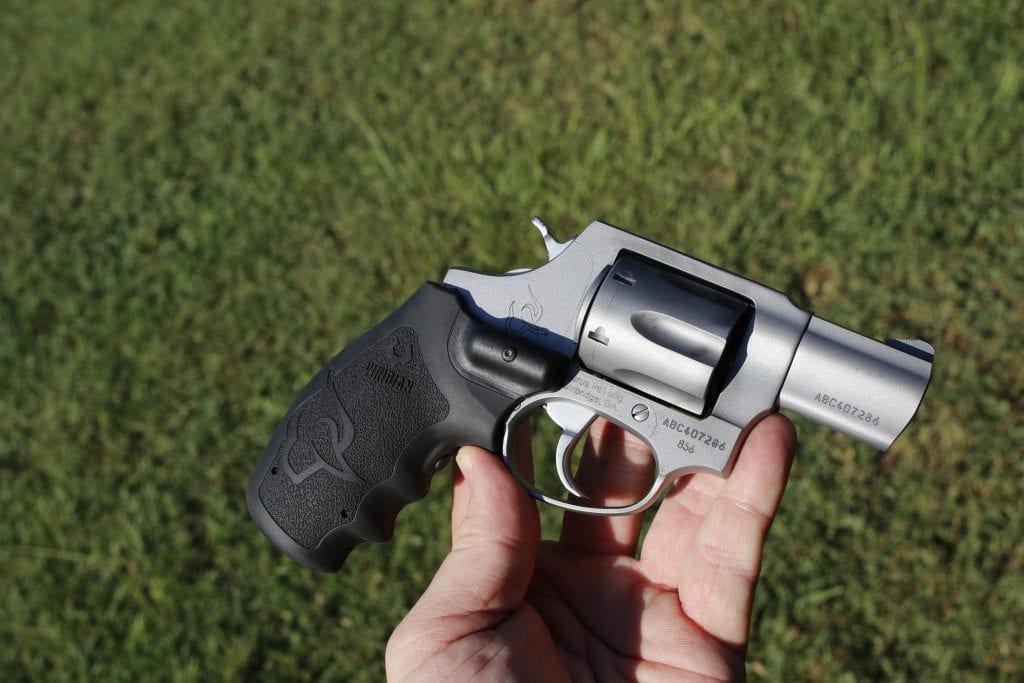 The Viridian Laser Grip adds an extra finger’s worth of grip. It feels similar the factory grip.

An Argument for the Revolver

My EDC guns are subcompact 9mms. They have no external safeties. I typically carry at least one spare magazine and prefer to have 20 or more rounds of 9mm on me at any given time. I train with these guns. I force failures. I practice magazine changes. I practice regularly. But many people don’t.

I’ve talked to more people than I can count about finding the perfect handgun for their needs. Some have no business carrying a gun at all, and I’m not shy about saying so. Others I find are eager to actually jump in and learn how to solve problems with a semiautomatic. And I mean that in two ways—they are willing to defend themselves and others and they’re also willing to understand what causes malfunctions and how to solve them. 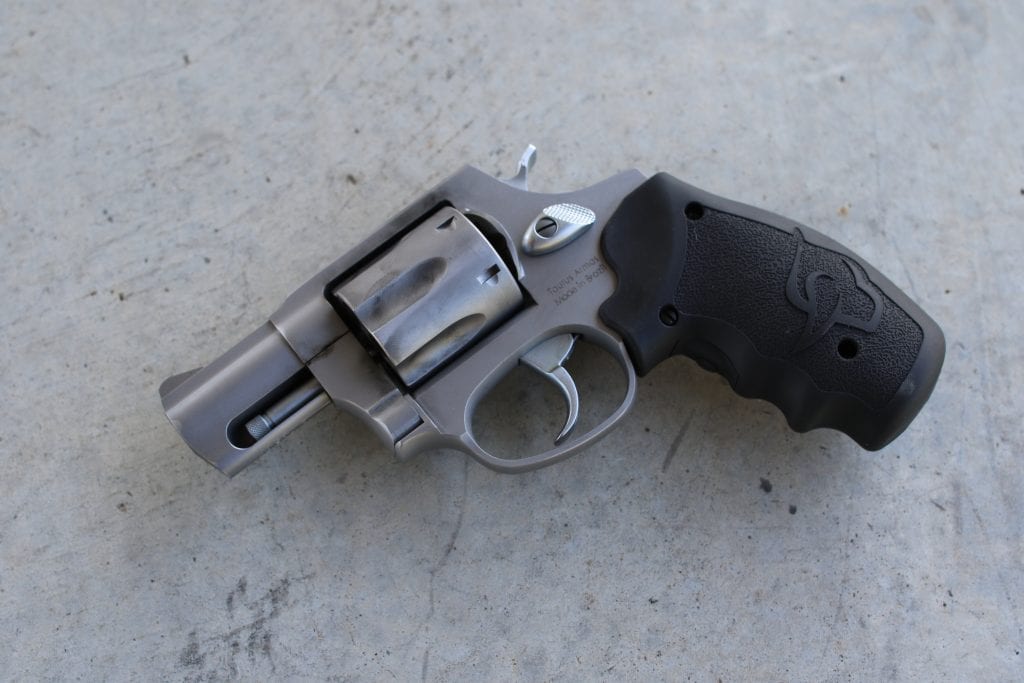 The 856’s cylinder swings out to the left.

In the middle of these two types of people are those for whom a good revolver is the perfect choice. With a hefty trigger pull, the added nuance of a single-action pull, and the ease of maintenance, a revolver can be easy to learn.

When my mother, in her late 60s, wanted to get her concealed carry permit, we worked through several guns and settled on a revolver. She didn’t have to rack a slide and she didn’t have to worry about accidentally dropping a magazine. As she aged, she couldn’t pull the double-action trigger–but she could still double up on the hammer and cock the gun. It was a solution that worked for her almost to the end.

There are a lot of .38 varieties out there. Or there were. As I’m writing this in the height of a massive ammo shortage, I’d say you take what you can get. But the Taurus 856 is rated for .38 +P, so I’d carry the hottest .38 hollow points you can find. Practice with bog-standard wadcutters, if you want, but carry the best defensive ammo you can get. 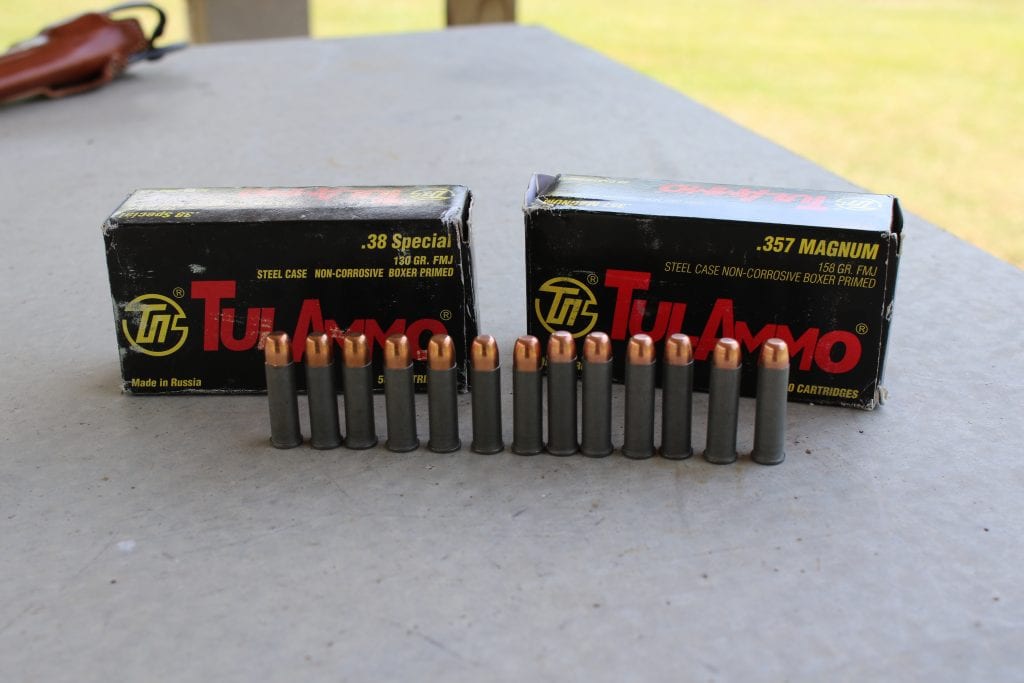 This stainless model is hefty—22 ounces. It eats recoil well. Tula’s ball ammo is great for range work, and I’ve had no issues with the steel cases hanging in the cylinder.

I’ve also run low-recoil Hornady rounds through, and the 856 shots wonderfully flat. Hornady’s Critical Defense produces a bit more snap, but it is still blissfully manageable. The trigger is easy to work. While the reset is a bit more pronounced than that of a well-tuned semiauto, I can get rounds on target fast and manage the recoil just as well.

Part of that recoil management comes from the ergonomics. I’ve always liked the way a revolver feels in my hand. From the flared grips of an 1873 Army to the rounded grip of the 856—there’s just so much more you can do with a grip when you’re not having to make room for a magazine.

The 856’s grip is a simple 2-finger grip (see the image at the top). Like many Taurus revolvers, it has a rubberized feel with many slat-like slits. This is hard to describe. The thin rubber fins are bendy and this helps cushion your hand. They’re not squishy, exactly, but not firm either. I’m not 100% in love with them. I very quickly changed them out for a set of Viridian grips. 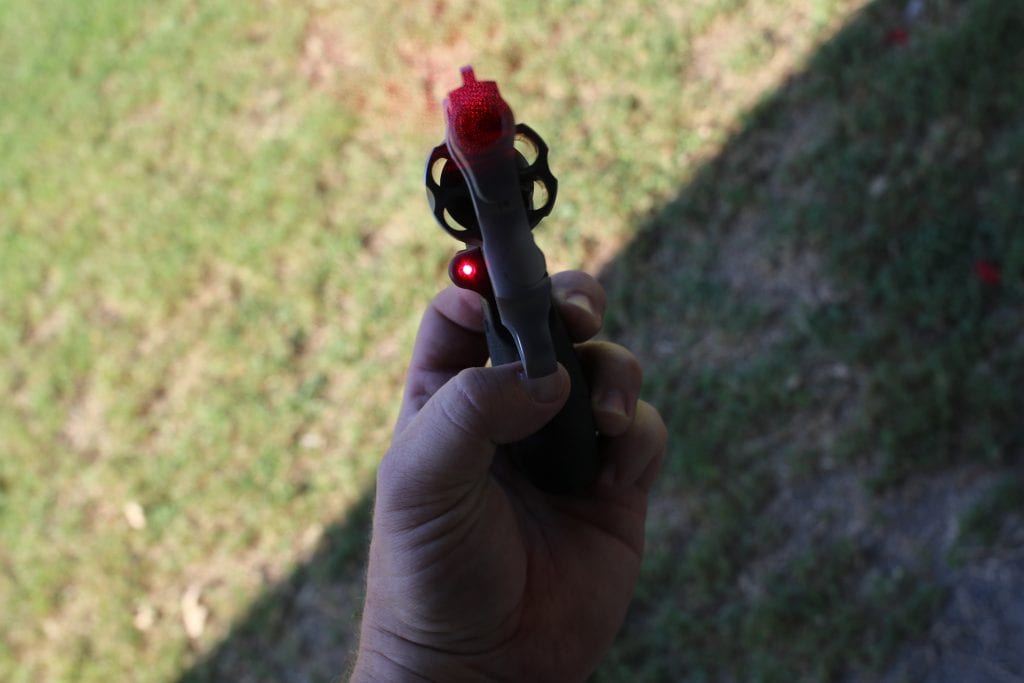 The Viridian laser shines from the right side, from the top of the grip. It won’t interfere with off-the-shelf holsters.

Viridian’s grip laser adds an extra finger onto the length and provides instant-on laser aiming. As soon as you hit that grip, the laser is on. The one I’ve got is red and the laser itself shines off the top of the grip, just over the top of your trigger finger (if you’re right-handed). 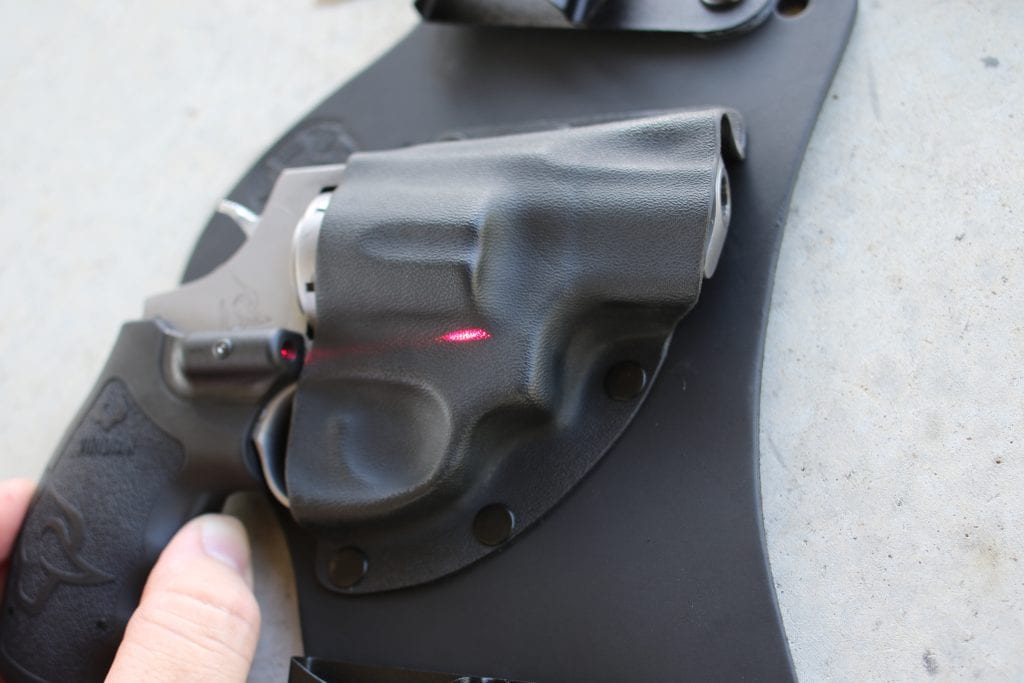 The 856 with a Viridian laser grip will fit standard holsters, like this one from CrossBreed Holsters.

Accuracy is overrated in defensive handguns. I’m not saying your EDC gun shouldn’t be accurate—it should. But that doesn’t have to be the #1 consideration. How fast can you put rounds on target—effectively? That’s the kind of accuracy I’m looking for—not group size. 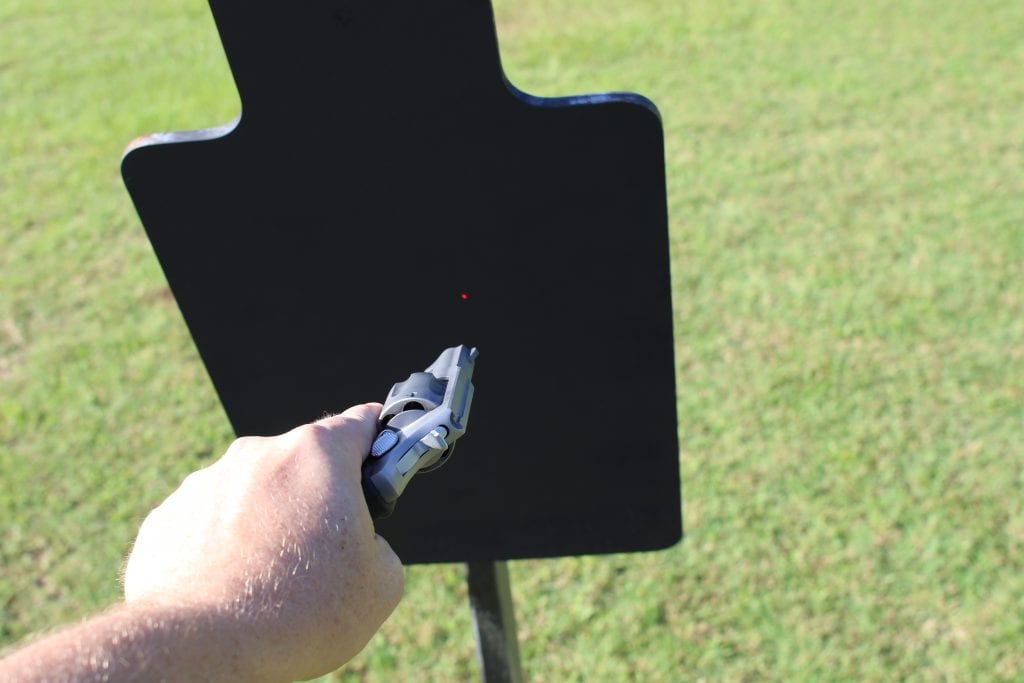 A red laser is daylight visible on some colors. It really helps in low-light. The dot can easily be seen, even at 25 yards.

Snub-nosed revolvers are meant to be fast on the draw, easy to point, and fired from relatively close distances. And in that respect, the Taurus 856 shines. It has a 2″ barrel. While it has a raised blade front sight, that blade is wide. And the rear sight is a milled gutter. Nothing too complicated, and certainly nothing to snag on clothing or jostle loose.

From 25 yards, the groups spread out. I can easily keep 6 rounds in a 4-to-5-inch circle, but if you’re accustomed to running larger pistols, these groups will make you cringe. But keep it in perspective. From 7 yards and under pressure, the 856 kicks ass. It shoots fast, flat, and you can place shots in a most-effective, threat-stopping spread.

At contact distances, though, is where you’ll begin to understand the popularity of the platform. There’s a reason why they call these belly guns. The 856 is easy to control one-handed. It shoots well from low ready, extends easily, and holds its own with any .380 or micro 9mm. And you don’t have to worry about close contact pushing the slide out of battery. A revolver can make direct contact shots or be fired from inside a pocket or a bag.

When I picked up the Taurus 856 for this review, I got a bit nostalgic. I cut my teeth on an old Iver Johnson wheel-gun. I really love the simplicity of a revolver. My wife, who isn’t as enthusiastic about guns as I am can shoot this gun well. My 13-year-old son runs it like a champ.

And I have to hand it to Taurus. This is a bomb-proof design, well-executed, and at a compelling price. The stainless version has an MSRP of $378.79. With a set of Viridian Laser Grips, it is $467.24. 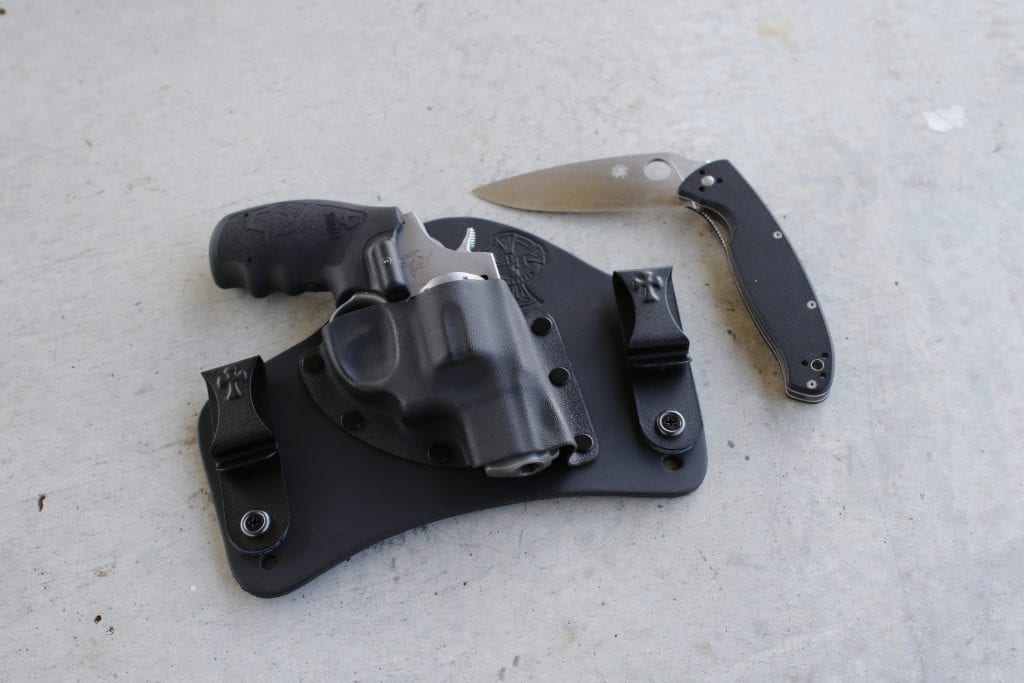 There’s an argument to be made for the simplicity of revolvers.

Less than a year ago, these guns were readily available. I’ve not seen one in a gun store in months, now. I know why. The lock-up on these guns is solid. The cylinder gap is minimal. The trigger is predictable with no grit or creep. Even the fit of all of the parts is done exceptionally well. Everything about this gun speaks to the quality that Taurus is capable of. I’ve said it before about Taurus, but I think they’re a brand that makes other gun companies nervous. You can feel it.

David Higginbotham is a writer and editor who specializes in everyday carry. David is a former backcountry guide in the Sangre de Cristo Mountains and Boundary Waters Canoe Area who was a college professor for 20 years. He ultimately left behind the academy for a more practical profession in the firearms industry and was (among other editorial positions) the Managing Editor for a nascent Mag Life blog. In that Higginbotham helped establish The Maglife’s tone and secure its early success. Though he went on to an even more practical firearms industry profession still, he continues to contribute articles and op-eds as time and life allow.