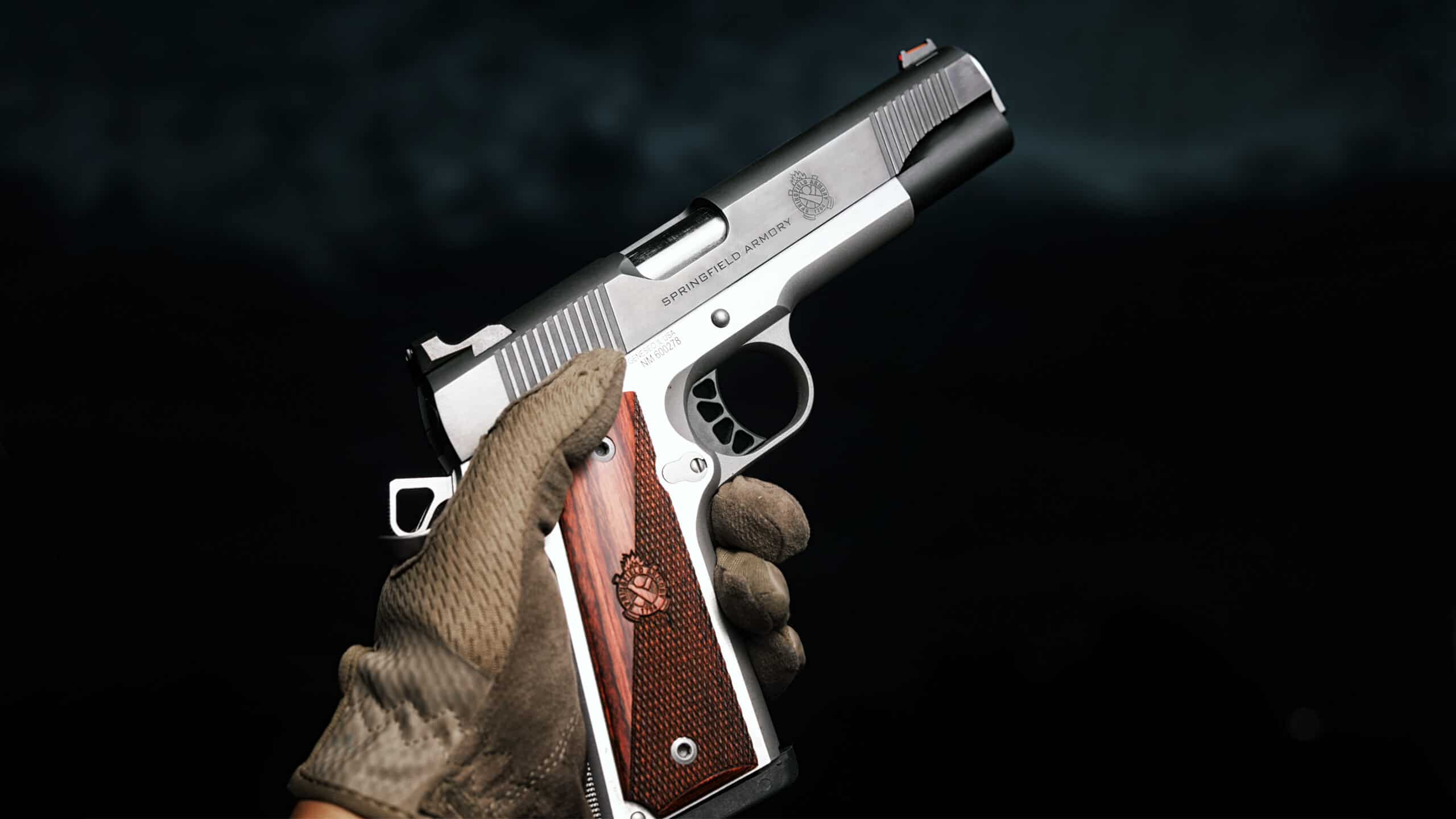 There are reasons why the full-size 1911 pistol is often described as “iconic,” and the gun’s long and successful history on battlefields, in the streets and at pistol championships isn’t the only reason. It’s slim for its power level, an important dimension for both comfort and concealment. When properly built, it’s also remarkably accurate, and its trigger system and grip shape adapt well to a broad range of hand sizes.

But you do not see it as often in holsters as you do striker-fired, polymer-framed pistols. Why is that? Is there something about the pistol that made it good for combat on the battlefield, but poor for civilian EDC?

The 1911 is big. It almost always fires a big round, is made of metal, and was designed as a military pistol more than a century ago. And because of these things, it’s also relatively heavy. Sure, a lightweight pistol can be easier to pack, and carrying a gun cocked-and-locked can scare off some EDC users. Some might say you could carry it with an empty chamber to offset that last concern, but let’s not even go there.

As with any choice in life, we go toward the strong points and do what we can to reinforce or offset the weak points. For concealing a full-size 1911 pistol, that means delving deeper than usual into the arcane art and science of comfortable, discreet gun concealment.

Your correspondent here is an average-size adult male, and one who began carrying full-size 1911 pistols concealed at the age of twelve when working part time in a jewelry store, legal in that time and place. In the decades that followed, I carried them concealed as an off-duty and plainclothes cop and as an armed citizen, won pistol matches with them, and killed large animals with them, all of which left me confident with the platform. And what I learned about carrying them concealed is what follows.

Because most of us don’t wear the same clothes every day in all four seasons, a single holster may not always do for 24/7/365 carry, either. I travel frequently, teaching firearms and deadly force, and usually have three or four holsters with me. I’m habituated to strong-side hip carry, and will have one inside the waistband (IWB) and one outside the waistband (OWB) because some, but not all, of my pants are sized for IWB. We buy the pants to fit us, and shouldn’t be surprised when it’s uncomfortable to try to make the same pants encompass us and a holstered service pistol. I’d suggest those two styles for the first-time carrier, with a good OWB to start because by definition, the first-timer hasn’t adapted the wardrobe yet.

I add a couple of orthopedic holsters. Being right-handed, I’ll have either a dedicated left-hand holster or an ambidextrous one in the suitcase in case of an injury to the dominant upper limb. (Been there, experienced that.) Because I also have a past history of lumbar back problems and am old enough to recognize the word “relapse,” I try to also have handy a shoulder holster that takes the weight off lower back and hips if that becomes necessary.

Unless you have really, really big hands, you’ve noticed that the butt of a full-size 1911 protrudes from the bottom of your fist when in firing grasp. In other words, it’s kinda long. That’s why the butt wants to protrude, or “print,” compromising the first word in “concealed carry.” Pro Tip: unless you’re built large with a good distance between back and belly, concealing a 5” barrel 1911 means you probably need a holster with “FBI tilt.” That is, the muzzle is pointed slightly behind you when the gun is holstered, also known as “forward tilt” (of the whole gun from the vertical plane) or “rearward cant” (which describes the orientation of the muzzle). This is true for both IWB and OWB hip carry.

IWB maximizes concealment because everything much below the bottom edge of the belt is hidden by the trousers if the torso garment rides up, and also because the belt is constantly holding it tight to hip and torso.

If you like the currently trending AIWB (Appendix Inside WaistBand) carry, be glad you chose the 1911. Since the muzzle is going to be pointed at your private parts and/or femoral artery, you’ll have (A) the engaged manual safety of the 1911’s mandatory cocked-and-locked carry, (B) the signature grip safety of the 1911 and (C) the ability to place your thumb on the face of the hammer to keep it from coming forward if all else fails (and to guarantee that the grip safety is not depressed). For AIWB you might want a slightly different holster cant to better allow a locked wrist from the beginning of the draw.

That emergency non-dominant-hand side holster I mentioned wants to be a mirror image of what you usually carry. Darn few of us have as many reps as we probably should have running the defensive handgun “weak-handed”; a movement mirror image to what we usually do has a sort of pantograph effect that helps speed the learning process. If you’re a 1911 person, have at least one with an ambidextrous safety, ready to go if you suddenly become a newborn southpaw. (Did I mention, “been there”?)”

For shoulder rigs, find one that’s handy for you to reach. Pure horizontal (muzzle straight to the rear) is probably the fastest shoulder rig orientation, but won’t conceal well with a full-size 1911 unless you have a really deep chest. This writer likes muzzle perpendicular to the ground orientation, particularly for access through heavy outer garments, with a belt loop at the bottom to keep it in place. Nothing beats the time-tested Bianchi X15 orientation for this.

We’ve mentioned the (dis)comfort factor in IWB carry. For regular use, your pants need to be about two inches larger in the waistband to achieve acceptable comfort level. For OWB, the 1911 has all its ammo in that magazine in its grip-frame, and will want to tilt outward from the body. The 5” barrel and commensurate length slide actually helps to push it back toward you for better concealment and stability, since the front end of the gun has the lower body pressing it in that direction. For maximum tight-to-the-body profile, light a candle to the memory of Roy Baker, who designed the Pancake holster circa late 1960s with leather flaring fore and aft of the holster body for the belt slots. This created two more points for belt tension to snug the gun up against the wearer. It has become one of the most widely-copied features in the holster industry.

Don’t neglect magazine pouches. The vast majority of 1911s have single-stack magazines: good for slimness because of better concealment and the ability to get more hand around the gun when firing, but leaving you with no more than nine rounds in your .45 or eleven in your 9mm. The fewer rounds in the gun, the more you’ll be depending on reloads if things go really bad. That flared-edge Roy Baker concept helps pull a spare magazine in tighter to the body for concealment. The slimness of single-stack 1911 magazines also makes it easier and more comfortable to carry two instead of just one.

Spare magazine configuration is a consideration. I like a flush-bottom magazine in the gun if concealment under, say, a tailored suit is paramount, but in a vertical magazine pouch magazine length doesn’t seem to impact concealment or carry comfort at all. A magazine with a wide floorplate tends to dig into the ribcage area when carried snug to the body, and a “GI” style flush bottom has a sharp edge that does the same, but the Wilson Combat 47-series magazine has neither of those problems and is my “Mama Bear” compromise preference for concealed carry of spare 1911 mags.

If you find none of the above makes you comfortable in daily carry with your full-size 5” barrel 1911, don’t despair. A quick run through the Springfield Armory catalog will show you versions with shorter barrels, shorter butts and lighter weight. There’s even the rounded-rear-butt profile option on the 9mm EMP4, a lightweight 1911 designed expressly around the short 9mm cartridge and, in my experience, both accurate and reliable.

If you like the way a full-size 1911 shoots for you, the above advice can get you there with acceptable comfort and discretion. So, it looks like the full-size 1911 might be just about right for CCW. 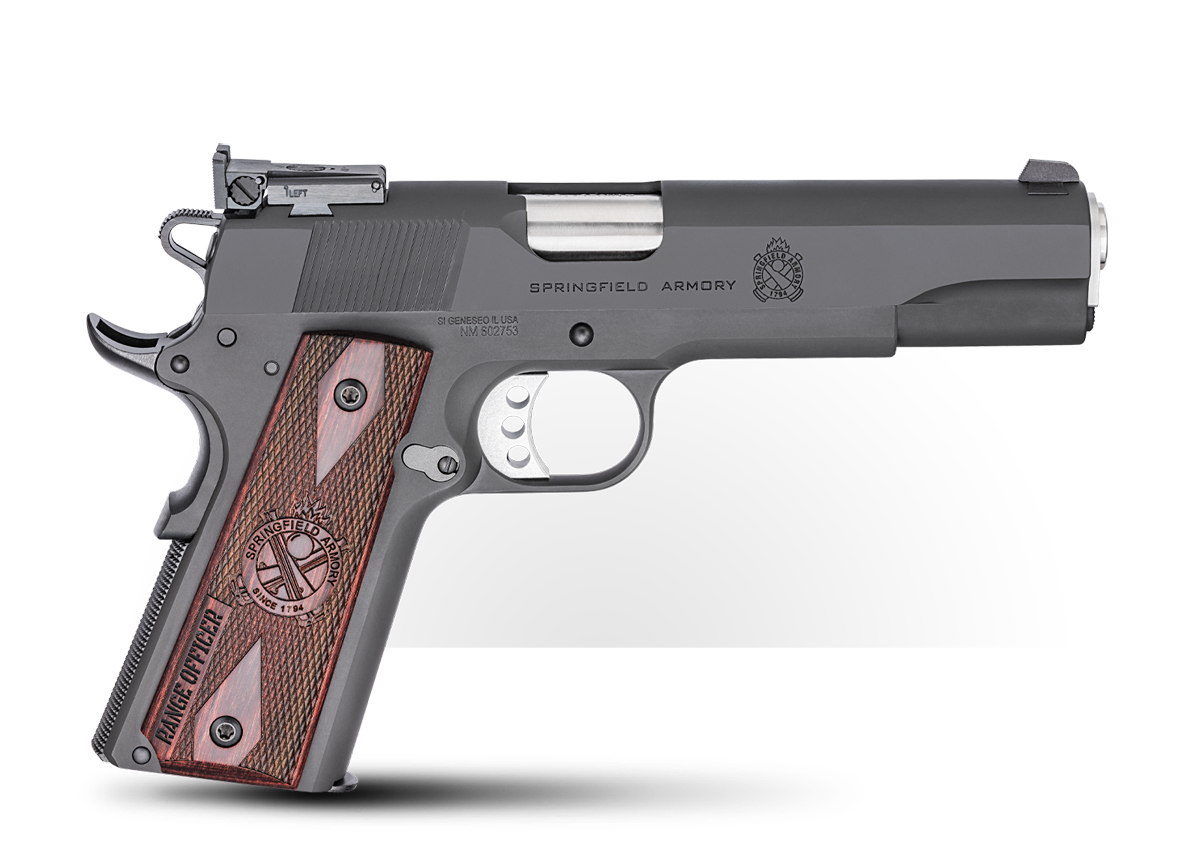