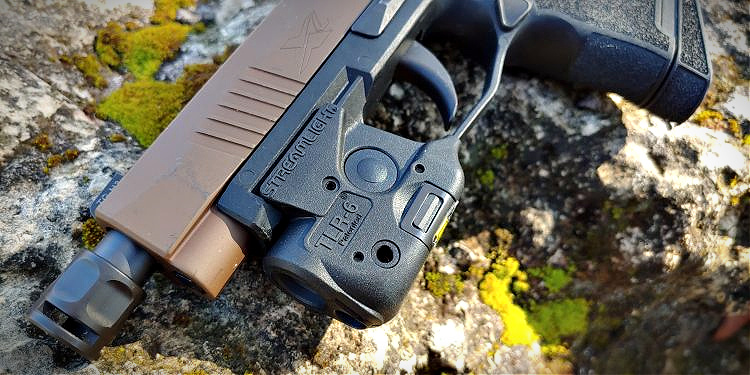 Tiny guns are all the rage. They are evolving and changing and becoming a better option every year. The SIG P365 and the Springfield Hellcat have changed the game, and the gaming is changing to fit them. Streamlight’s TLR 6 is a microlight made for micro-sized guns. I’d hazard to say it’s the smallest weapon light currently on the market. With that in mind, I grabbed a P365 variant of the TLR 6 and strapped it on my hybrid build to find out where the TLR 6 sits.

The TLR 6 in Living Color

The P365 has a proprietary rail system, so the TLR 6 has to do some fancy maneuvering to accommodate the gun. This involves a portion that attaches over the trigger guard and the rail. To attach the light, you have to remove three screws and essentially pull it apart. It attaches like a clamshell over the light and is secured by three bolts. There are no instant means to install or remove the TLR 6 from the P365.

Since most micro guns lack a rail and have different frame shapes, there are six different body types to accommodate various handguns. A universal kit exists, but you can also just purchase the proper option for your firearm. The TLR 6 fits the P365, the Shield, the S&W M&P, the Kimber Micro, the Glock 26/27/33, the Glock 42/43, 1911s, the XD/XDm series, Kahr series, and a rail model for whatever else. 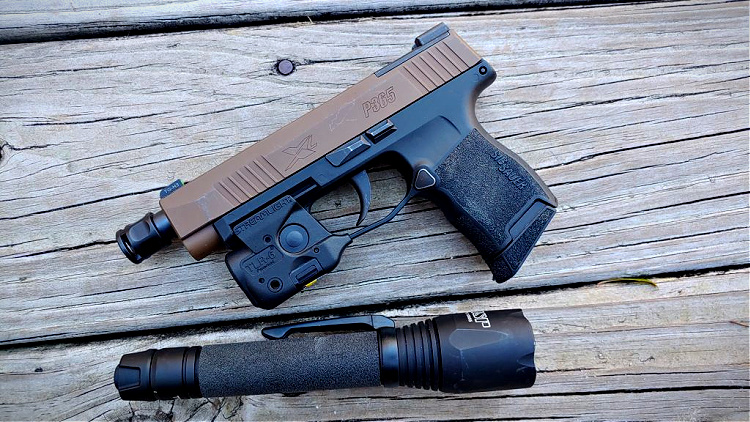 The TLR 6 comes with or without a laser. With a laser, the cost is a hair more. The light weighs a mere 1.12 ounces and varies in length from 2.2 inches to 2.97 inches, based on the model. The light sits flush with the frame of most guns.

On small guns, size matters. You picked a small gun because it’s small, and you are looking to add bulk to it. At the same time, you want to minimize that bulk as much as possible. The TLR 6 just does that. It doesn’t add substantial weight, length, or width to the gun in any way. I’m a fan of the design and figure it to be about as compact as you can get.

The TLR 6 features ambidextrous controls in the form of two big buttons on the left and right sides. Hit either, and the light springs to life. An instant hold turns the light on constant, and a press of more than a second utilizes the momentary mode. The TLR 6 has excellent ergonomics that place the controls within easy reach of both the trigger finger and support hand thumb. 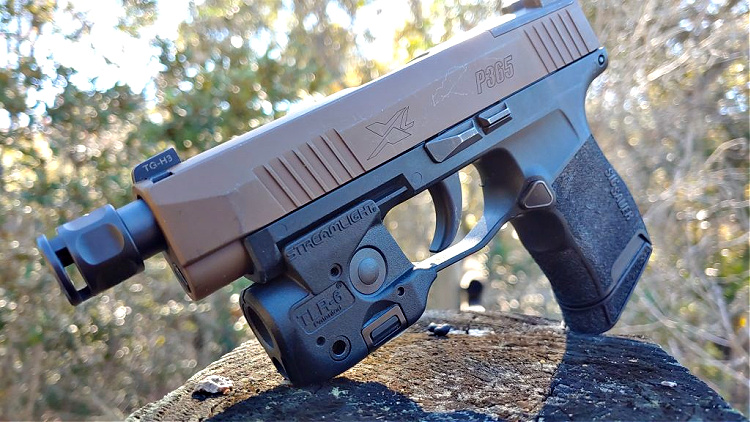 The TLR 6 is ultra-small, and sports size-appropriate power. One hundred lumens and 2,000 candela isn’t a lot of power in the modern world. When any full powered light can give you ten times the lumens and five times the candela, 100 lumens isn’t much. It’s about the same power as most penlights.

In a completely dark environment, it will work okay, and this level of power is only useful in very close quarters situations. The light is at home inside a building, parking garage, or alley. Introduce any kind of range or photonic barriers, and the light will fall short.

For this reason, I think of the TLR 6 as a backup light to a handheld light. Having a WML doesn’t disregard your need for a handheld light, and a handheld light can be a powerful tool to have. A powerful handheld light allows you to gain the range and power to overcome a wider variety of environments. The TLR 6 gives you an ultra-small light attached to your concealed carry pistol in the event you can’t access your handheld light. 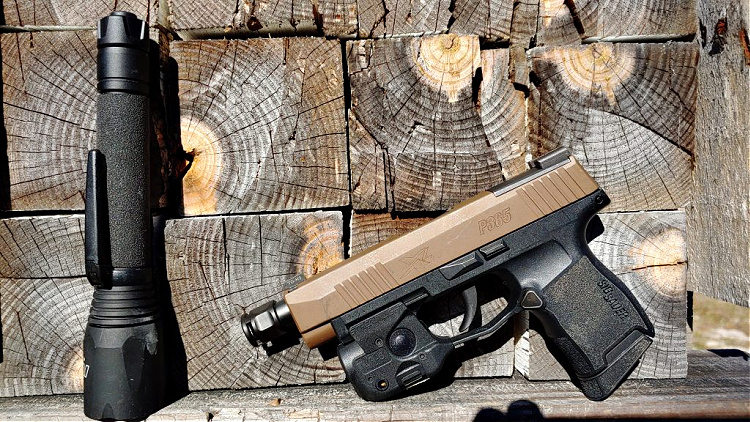 The TLR 6 plays backup to a handheld light

Should one arm be busy handling an obstacle, shielding a child, or be injured, you can still access your weapon light. The TLR-6 grants you some light and some power to establish PID for situations where additional light isn’t an option. Options are like tools; keeping an extra in the box never hurts.

The TLR-6 throws a cold beam, meaning it’s more blue than white. On a light with this power level, the tint doesn’t matter much. Colder lights are generally more comfortable to me. The beam will fill a room with lots of spill and does a decent job of filling peripheral vision. Just don’t expect much throw.

The TLR 6 also packs a visible laser. Visible lasers don’t replace sights, but they do have their uses. Again it’s a tool for the box, and a tool is a good thing to have.

The red laser on the TLR 6, when combined with the light, can allow you to both establish PID with the beam of light and instantly be on target with the red laser in low light situations. Lasers are also excellent for low-light shooting situations when paired with awkward shooting positions. 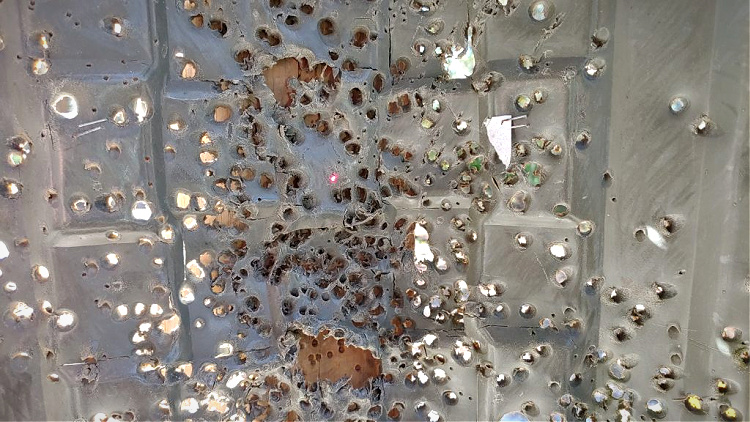 Lasers can be useful as an alternate sight system, and when you are focused on the target, you might be forgetting about a good sight picture.  A laser on the target lets you know where the gun is pointed. Lasers can also be a scary but effective de-escalation tool. After thirty years in movies and media, the red laser lets bad guys know they’re in trouble.

Oh, and lasers are kind of a lot of fun at the range. If you just wanna play around a bit and shoot accurately from the hip, then the laser is for you. These things make ringing steel a ton of fun. 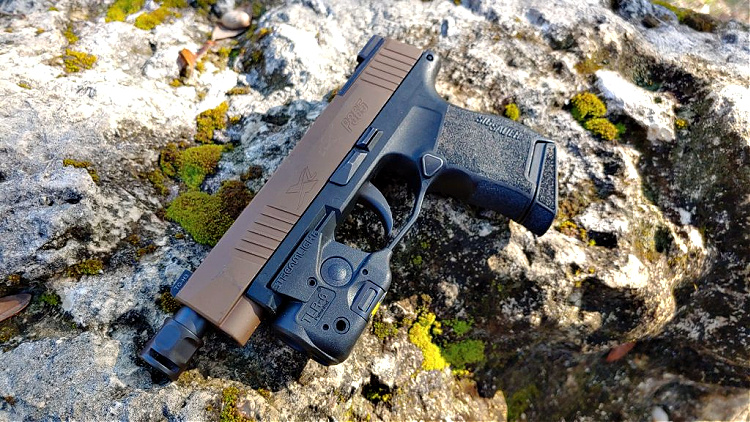 The TLR 6 might be the only option you have for guns as small as the P365 and Glock 43. Streamlight makes a robust weapon light, and it does give you a good option for micro-compact pistols.

That being said, if you can only purchase one light, I’d choose a good handheld option to pair with your micro-compact pistol. If you have the handheld light and you want something for your tiny fighting pistol, then the TLR 6 is a better option than any Olight.