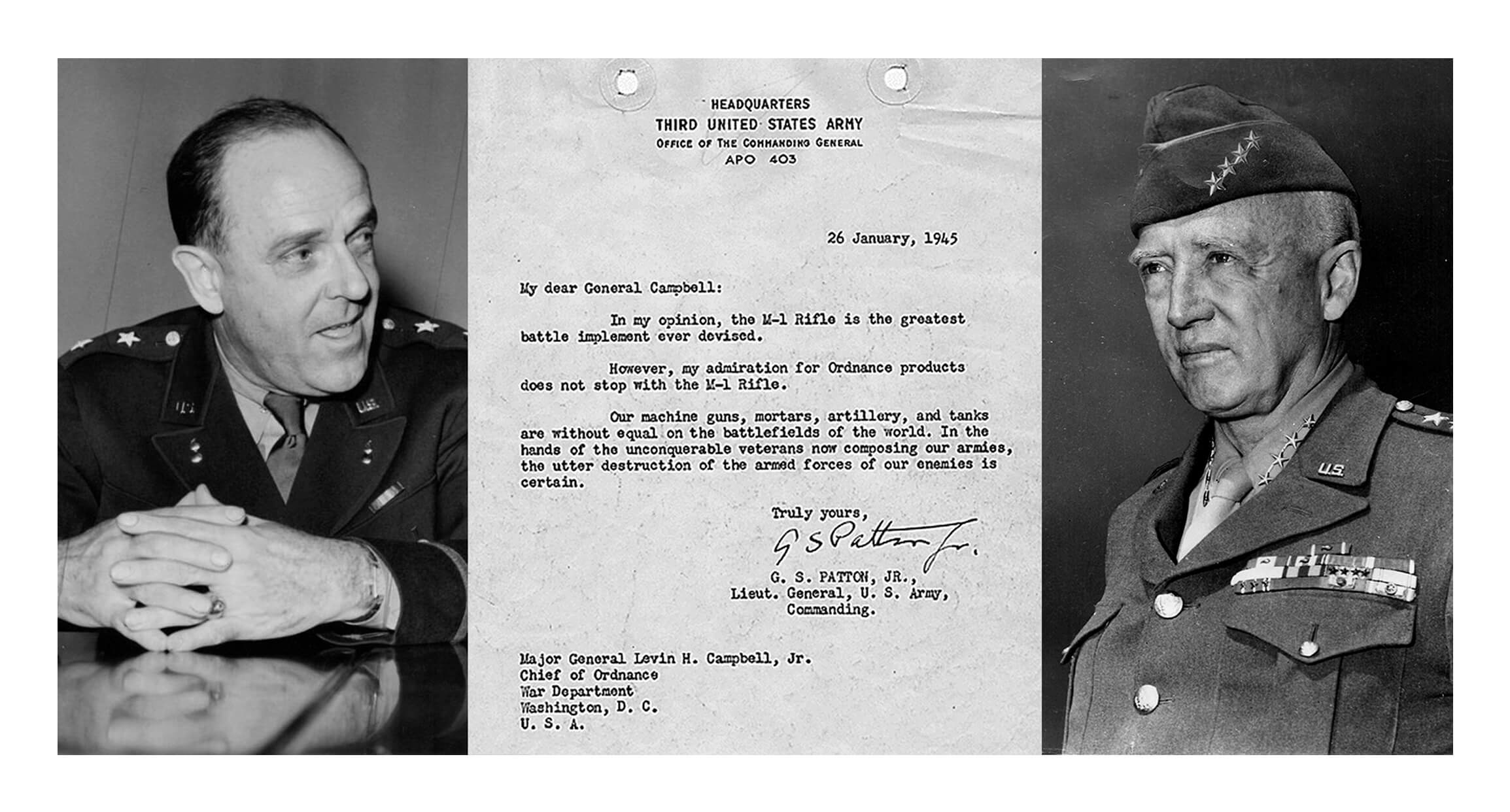 In the final months of World War II, on January 26, 1945, Lieutenant General George S. Patton, Jr. uttered the famous phrase, “In my opinion, the M-1 Rifle is the greatest battle implement ever devised.” Well, actually, he didn’t utter it — he wrote it.

We’ve all heard Patton’s praise of the M1 Garand rifle. Many World War II veterans and M1 enthusiasts alike are often heard echoing Patton’s words, but few know the context in which it was made. It is the first line in a letter from Patton on his official Third Army “OFFICE OF THE COMMANDING GENERAL” letterhead to Major General Levin H. Campbell, Jr., who was the War Department’s Chief of Ordnance.

John Garand’s rifle was officially designated as the M1, and was adopted as the standard U.S. infantry rifle in 1936. The first production M1 rifle was successfully proofed, function-checked, and accurized on July 21, 1937. The Army accepted the first run of guns in 1938.

The Garand semi-automatic rifle wasn’t Patton’s only object of adoration in the letter. He went on to say that his “admiration for Ordnance products does not stop with the M-1 Rifle.” He goes on to say that the United States’ “machine guns, mortars, artillery, and tanks are without equal.”

High praise from Patton was not to be taken lightly. He was just as feared and revered during his lifetime as his legacy is today. The man knew his way around a rifle. From his days at VMI at the turn of the 20th century through his service in World War II, Patton had seen a number of different rifle designs issued to soldiers. No doubt he knew the pros and cons of each advancement and adoption.

Perhaps that’s why this letter, which was no doubt considered by many to be just another piece of official daily correspondence, was preserved. Had it been discarded, military historians and gun collectors the world over would have been denied one of the most famous quotes of the 20th century.

Of course, Patton knew that high quality weaponry was useless if not used properly by well-trained soldiers, or, as Patton referred to them in his letter, “unconquerable veterans.” It was in their hands that the M1 Garand and the other Ordnance tools of their trade would ensure the “utter destruction of the armed forces of our enemies.” In true Patton style, he made sure to lay on thick the praise of the men under his command.

The recipient of Patton’s letter, Major General Campbell, knew his way around ordnance of all kinds. He had served in many capacities at ordnance facilities throughout the country since 1918. Before becoming the Chief of Ordnance, he spent time at the Office of the Chief of Ordnance, Washington, D.C.; Stockton Ordnance Depot, California; Aberdeen Proving Ground, Maryland; and Rock Island Arsenal, Illinois. Clearly, the War Department had the right man for the job.

Patton knew that it was under Campbell’s guidance and direction that enough M1 rifles — and other ordnance — were produced in such quantities that allowed his unconquerable veterans to cause utter destruction to the enemy. During World War II, all the aspects of Army Ordnance boomed, becoming a $30 billion-a-year industry.

Between the two of them, their combined World War II production totaled 4,040,802 rifles. That’s a lot of battle implements! With numbers like that (and military results to back them up), it’s easy to see why Patton — and untold scores of WWII veterans — all heap the same kind of praise on John Garand’s rifle.