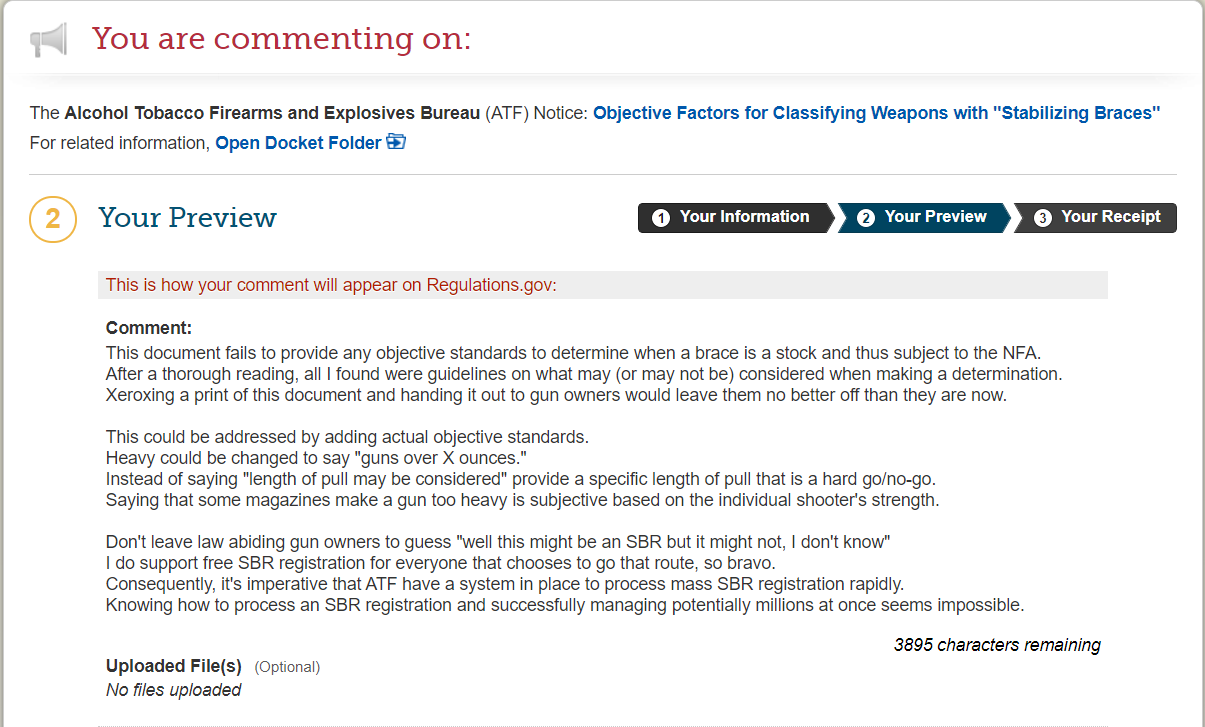 Now is the time. Click http://www.regulations.gov/ and leave note for the ATF on how you feel their ‘objective standards’ are and how they could improve them.

Be sure to reference ATF 2020R-10 to properly attribute the comment to the Braced Firearm proposed rule change.

It is sad, really. The ATF appear to be trying. They are trying to be fair about this, but fair is not the same as objective. The public needs objective, and objective means that I can hand these standards to anyone of moderate literacy and they could figure out whether their device is Title I or Title II and be shown clearly why their device is I or II and how to correct it to make it the other if that was their goal.

The ATF, in their attempt, continue to carefully not state the open secret that they cannot possibly test millions of potential configurations in a timely manner. They equally eagerly point to the trees in a very “oh, would you look at how trees those trees are today.” to deflect from the obvious conclusion that the NFA is effectively null and void by today’s tech. The response of, “We just enforce the rules,” becomes a hollow comfort when the ATF is also in the business of making the rules. They have been saddled with this nebulous duty by AG after AG, but that doesn’t make it any better from our perspective as gun owners.

ATF “Opinions” have effectively carried the weight of law and have been subjective. They may be reasoned subjectivity and concluded by more than one person, but subjective they remain.

Here is the kicker line for me personally in this whole debacle.

“No single factor or combination of factors is dispositive, and FATD examines each weapon holistically on a case-by-case basis.”

Which is the polar opposite of objective. If it was objective, than a single factor would absolutely be dispositive. A part would be too long, have too much surface area and be used as a stock, use an optical device with eye relief distance indicating shoulder firing, something that could be measured and stated ‘Yes’ or ‘No’ on the feature.

This case-by-case “holistic” approach exists because if the ATF were to admit they cannot do this objectively (they can’t, they just won’t admit it) then the NFA crumbles. They openly admit there is no practical functional difference between Title I rifles and shotguns, and II SBRs and SBSs. Combining that admission of fact with the intent of the NFA “to regulate certain weapons likely to be used for criminal purposes,” (which itself is subjective) and the mountain of data showing these are unlikely to be chosen for criminal purposes on the large scale, the NFA crumbles further.

The NFA holds many parallels with Prohibition, and chief among those parallels is legal means based on objective criteria to get a similar result. Braces were in many ways just a convenient and cosmetic work around, they made AR-type pistols look better and more like an SBR without the aggravation of the NFA.

We know that availability, cost, and concealability are the highest influencing factors in criminal misuse of firearms selection. Can the criminal or criminal-to-be afford to acquire it, not just financially but risk wise as well. Does it make sense, especially from an organized crime standpoint (another reason for the NFA), to acquire these or more sense to acquire more less expensive easily concealed firearms? Presence at a crime, an objective fact, does not equate to ‘likely to be used for criminal purposes,’ a subjective observation based on perception.

So please, respectfully and firmly add your voice to the ATF’s comments.

Limit profanity or it will not be published.