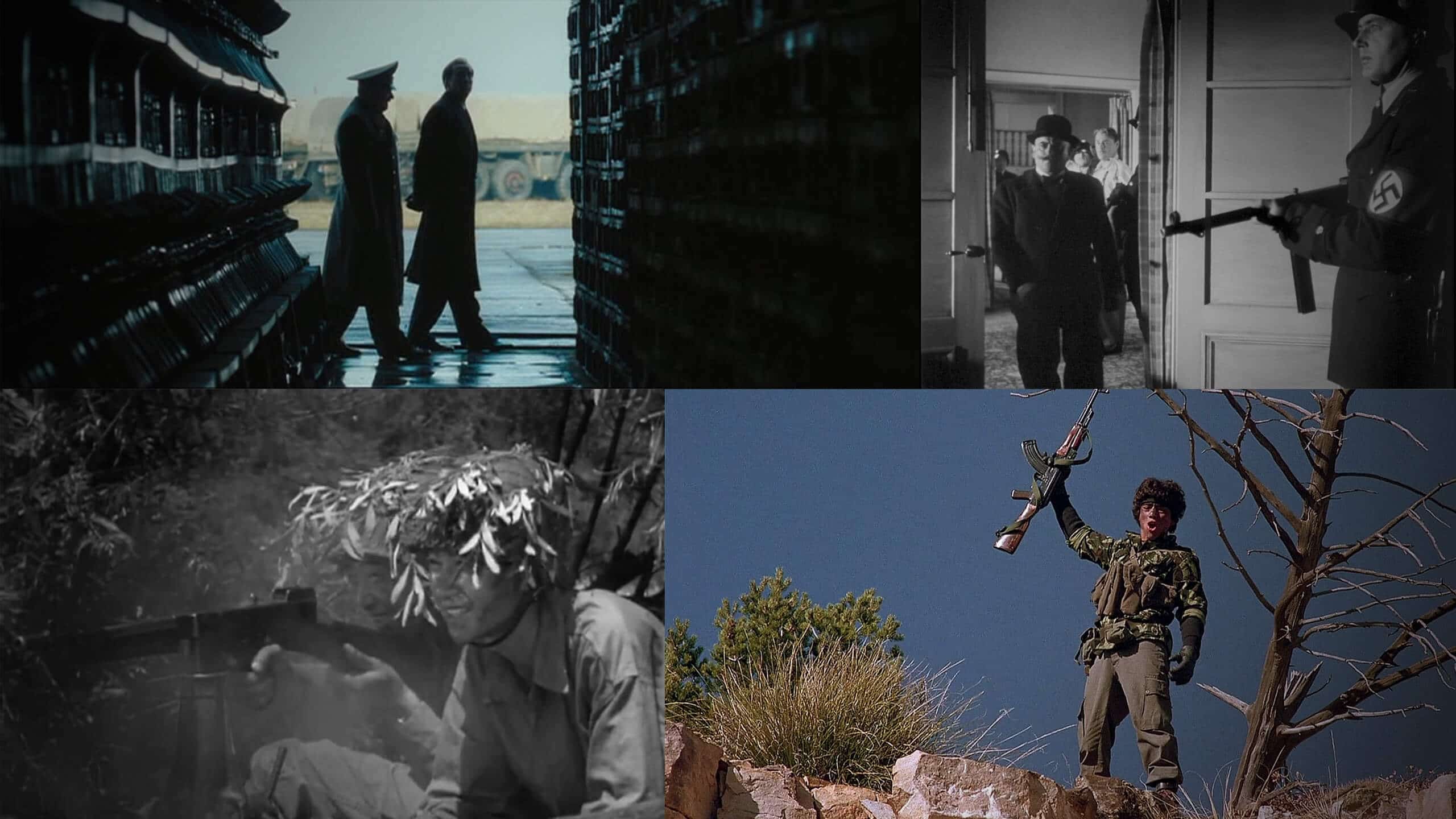 The difference between a good and bad war movie can come down to the small details. While acting and story are as important as any other genre, in the case of historic war films the accuracy of equipment — especially the guns — can help make for a more convincing and more compelling experience for the viewer. Today viewers expect more, and in many cases, filmmakers can “fake it” to “make it” thanks to CGI when it comes to massive battle sequences. But the small details, like the firearms, can still stand out.

However, over the years filmmakers have had to go with what was available. In some cases the firearms used were from the wrong era — a point previously explored on The Armory Life — but in other cases it was really a matter of what was available at the time.

Here is a round-up of some of the notable, and perhaps not so notable, stands-in for military small arms in movies.

Guns of the Axis

During the Second World War, a series of propaganda films were produced by the West, but it was virtually impossible for weapons from the Axis powers to be used at the time. As a result American and other firearms stood in. Sometimes little effort was made to “disguise” that fact — notably in the 1942 film Guadalcanal Diary, where an M1928 Thompson was crudely mounted on a tripod!

The same film has the Imperial Japanese Army soldiers (IJA) armed with the airplane version of the Lewis Gun. Interestingly, the Imperial Japanese Navy Land Forces did use a licensed version of the Lewis Gun that was designated the Type 92. However, it had a much larger drum and was used on a flexible mount, but in this case it was a close stand-in.

German-born director Fritz Lang, who is most famous for his science-fiction epic Metropolis, fled Nazi Germany and during World War II made the first film to chronicle Operation Anthropoid about the assassination of Reich’s Protector Reinhard Heydrich, one of the architects of the Holocaust. Made in 1943, just a year after Heydrich was killed in Prague, the film Hangmen Also Die! featured over-the-top characters, but the production went to reasonable lengths to make the German weapons look correct. This included Thompson submachine guns dressed up to resemble the MP40.

At the time the of the film’s production, the American military had only engaged the Germans in North Africa, and it would be another year until the D-Day landings. However, it is worth noting that the Soviet Union produced a number of films — beginning with the 1942 release We Will Come Back (Sekretar raykoma) — which actually featured captured German equipment.

Commie Guns in the Movies

During the Cold War it was actually impossible for western armorers, the person who supplies firearms used in movies and television, to obtain Soviet Bloc weapons. If you were to watch the 1968 film The Green Berets, you’d notice there isn’t a single AK-47 in the film — despite the fact that it was widely supplied to the People’s Army of Vietnam (PAVN) and the Vietcong.

The AK-47 actually had its film debut in the 1955 Soviet-made comedy Maksim Perepelitsa, which tells the story a young man (the title character) who tells wild tales and later is drafted into the Red Army. It is notable in that the AK-47 appeared in the film a year before most Western observers saw it in use during Budapest Uprising. It wasn’t until 1977 that an AK-47 was seen in a western film when it appeared in the Israeli-made Operation Thunderbolt, and 1978 until Kirk Douglas became the first American actor to use an AK-47 on screen in the movie The Fury.

It has been reported that the armorers who supplied the AK-47s for such films as Operation Thunderbolt and The Fury, as well as Delta Force (1985)and Iron Eagle (1986) were based in Israel and used firearms captured in the Six Day War of 1967 and the Yom Kippur War of 1973.

The 1984 film Red Dawn, which saw a Soviet invasion of the United States stopped by teenage Patrick Swayze, Charlie Sheen and Lea Thompson, was notable for attempting to depict Soviet equipment and small arms.

Egyptian Maadi MISR commercially released rifles stand in for the AK-47 while a Valmet M78 was mocked up to resemble the Soviet RPK light machine gun. Impressively, the armorers also dressed up an M60 as a DShK heavy machine gun!

More recently stand-in guns were used because of what was available and this is certainly true of the 2005 film Lord of War. While Nicholas Cage begins the film with a monologue on the merits of the AK-47, in a key scene set in the Ukraine his character looks over a stockpile of thousands of Kalashnikovs. However, the scene was filmed in the Czech Republic and the weapons are actually the similar looking Sa vz. 58 assault rifles. According to director Andrew Niccol, the guns were real and rented from a real arms dealer as it was reportedly cheaper to rent 3,000 real guns than to rent 3,000 blank converted props or to find non-firing versions.

Just as it can be difficult for western filmmakers to obtain Communist Bloc small arms, Soviet filmmakers faced a similar problem. Some efforts were made to mock-up firearms, but in other cases little was done to disguise what appears on screen.

In the 1959 production The Green Wagon (Zelyonyy Furgon), a Soviet adventure movie set in 1920 in Odessa during the final years of the Russian Civil War, a Degtyaryov DP-27 (known as a DP-28 in the west) was quite crudely modified to resemble a Lewis Gun — a weapon that was supplied to the White Forces. While little was done other than to add a faux barrel shroud, it is still notable that the filmmakers took the effort to dress up the weapon. It is also worth noting that the American film Porkchop Hill, about the famous battle in the Korean War, was made same year and in that film a Lewis Gun was mocked up to resemble a DP-27!

In the four-part Soviet/East German/Polish production The Shield and the Sword (Shchit i mech), released in 1968, AKM assault rifles stood in for the German StG44 in a few scenes, even when real StG44s were also used. Clearly the filmmakers wanted to fill out the extras with a variety of small arms — and it takes an eagle eye to spot the AKM.

The Soviet film I Serve at the Border (Ya sluzhu na granites) from 1974 features plenty of AKM assault rifles, but as it was set at a non-specified border outpost the main characters encounter “Western border guards” armed with M16A1s. As the Soviet filmmakers couldn’t obtain actual M16s, those in the film were visually modified StG44s.

Think you know your guns? Would you have caught all of these yourself when watching these movies? Today, trying to spot these stand-ins can allow the films to be viewed in a whole new way. Visit the forum link below to let us know your thoughts as well as any other “wrong” movie guns you might have spotted in your favorite movies.