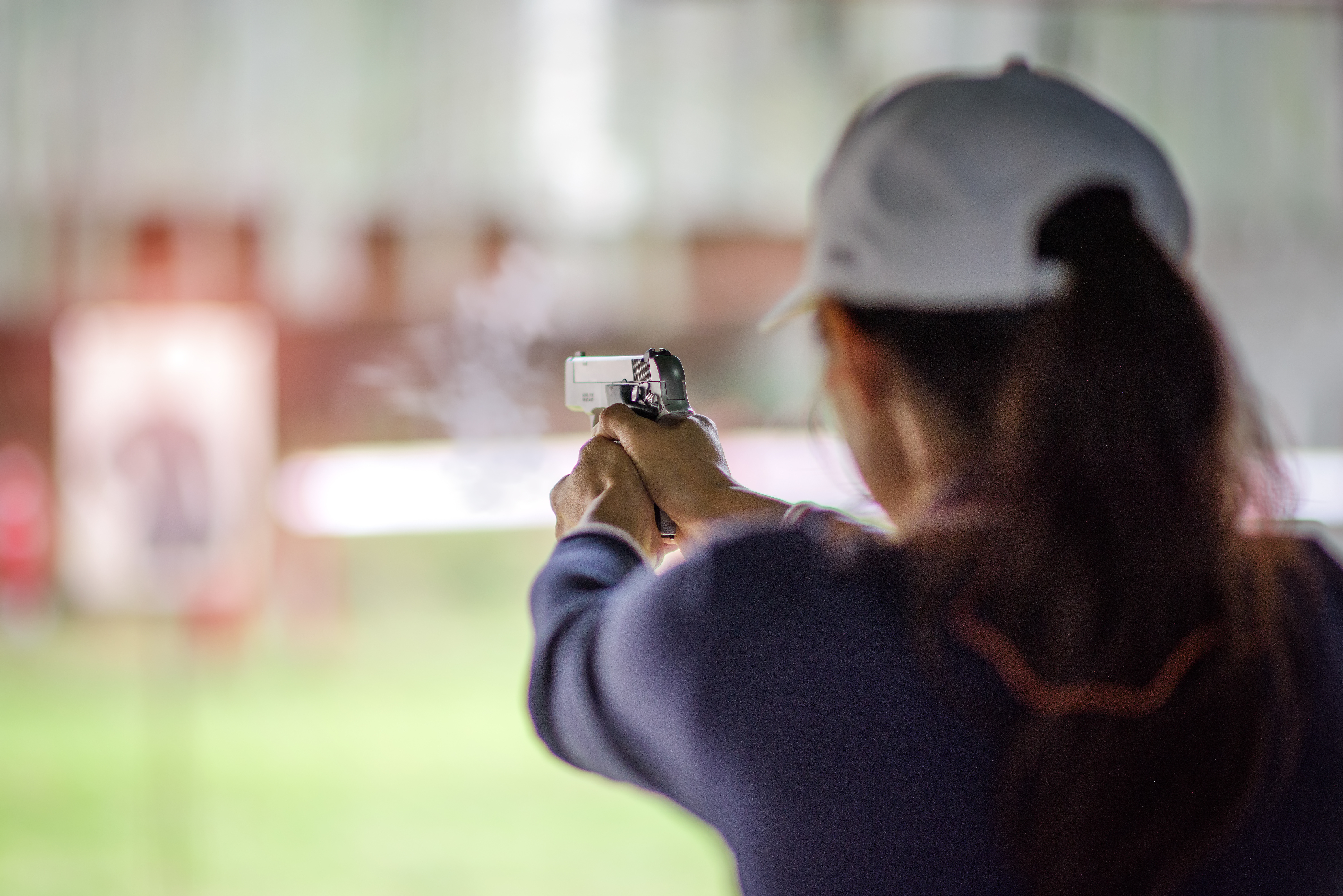 OK, there is no “best” shooting stance for self-defense. Let’s get that out of the way. As with most things in life, the “best” is situational and personal.

But there are reasons to utilize one compared to the other, and knowing the when, why and where are important.

There are three primary shooting stances. I will review each of them and the modifications to them.

This is a one-handed shooting stance. It is the least useful of the stances for self-defense, assuming you have use of both hands.

The main difference between Bull’s Eye and Power Point is the placement of the off-hand. In Bull’s Eye it is typically placed on the hip, with Power Point placing it high on the chest in a balled fist.

Both locations are to ensure it does not get struck while firing.

This is a bladed stance, with the shooting hand pressed all the way forward with a rigid (if not locked) arm.

The shooter’s body faces 90-degrees away from the target, with the head facing down the length of the extended arm.

This provides a very slim profile against return fire and is a very precise method of aiming. The downside is the method is very slow for target acquisition and recoil is poorly managed, especially by those not accustomed to shooting.

Follow-up shots are very slow and if the situation devolves to hand to hand, this position is far from optimal.

All that being said, you should practice one of these variants. It is the defacto shooting stance when your off-hand is occupied. For its faults, there are times when it is impossible to take a two-handed stance. For example:

This brings us to two-handed stances. There are two primary choices here: Isosceles and Weaver. First up is Isosceles.

This is a symmetrical stance where the shooter is squarely facing the target with both hands on the pistol.

Both arms are rigid or locked forward, forming an isosceles triangle, with the pistol at the acute angle closest to the target.

The feet are shoulder-width apart, with neither placed in front or behind the other and toes facing the target. Typically, the legs are kept fairly straight.

This method provides a very quick and intuitive position. The sights come naturally into alignment with the head in an upright position.

Visibility is easily maintained to 90 degrees to the left and right of the shooting direction.

For those who are wearing armor, this also provides the best protection as the square facing to the threat limits exposure of less-protected areas.

The shooter presents a larger target, but most vital areas are protected.

There are drawbacks to Isosceles. Transitioning past 60-70 degrees requires slow footwork. Having both feet in the same plane does little to control recoil.

This lack of front to back stability increases follow-up shot time. If the shooter is standing upright, instead of in a crouch, even low-recoiling rounds like 9mm Luger can cause the feet to shuffle in an attempt to maintain stability.

This weakness extends into hand-to-hand combat if the threat is not neutralized with the firearm.

The Power Isosceles shooting stance is a modified version of the stance that addresses many of those issues. It simply places one of the feet forward by six to ten inches and bends the knees to create a slight crouch.

Many people place the shooting foot forward, I place the other foot forward. There is a tendency to reduce the rigidity of the off-hand arm.

This is a fair trade-off to retain the armor protection and gain a lot of recoil control and stability.

With the knees bent, the legs help to act as a recoil absorber and lateral transitions are easier. The side with the foot forward does lose a bit of flexibility to react in that direction without footwork.

This stance requires a bit more practice to assume fluidly. For those with boxing or martial arts training, it is quite simple, as it is the basis for most fighting presentations.

The off-hand foot is placed eight to 12-inches forward and the weight is placed over this foot. The toes of the forward foot face the target. The rear foot carries less weight and is angled roughly 45-degrees away from the target.

Both arms are unlocked, with the elbow of the shooting hand pointing outward, the off-hand elbow points downward.

The primary gun hand pushes forward, while the grip with the off-hand pulls backward. This creates a very strong grip and aids in recoil mitigation.

The slight bend in the arms draws the pistol slightly closer to the body and allows for faster pivot transitions, and requires an attacker to come closer for a disarm attempt.

It also slightly increases the perceived size of the sights. There are two additional advantages to the bent arm presentation.

On pivots to the off-hand side, most people can transition well over 90-degrees without having to adjust their feet. This does not reduce the pivot capacity on the strong side.

It also allows for quick collapse of the arms towards the chest for weapon retention. By collapsing the arms, the ability to utilize the sights is lost, but the sights are a lot less important than maintaining possession of the weapon.

Your position remains the same and in such a circumstance, you are essentially contact shooting.

For those who are not wearing body armor, this is a commonly suggested stance. It does not provide as minimal a target profile as the Power Point, but much less of you is exposed than with Isosceles.

The bent arms do reduce the ability to control recoil. You are no longer presenting with either arm locked, the recoil must be controlled by the wrists first and the muscles of the arms second.

For those with slight builds or who are lacking upper body strength, this may create concerns. The other crucial issue is for those who are cross dominant.

This stance forces the dominant eye to be the same as the shooting hand. If it is not, a very unnatural head tilt is needed to line up the sights.

This creates a very awkward shooting position and further degrades recoil management and the likelihood of making consistent hits.

A modified version of the Weaver, the Chapman, addresses these issues. This variant maintains the foot position of the Weaver, but relaxes the upper body and locks forward the strong arm as it would be in the Power Isosceles.

This locked arm increases recoil control and reduces the need for upper-body strength. The off-hand remains bent, which naturally brings the head into a centered position over the strong arm.

This repositioning greatly reduces the disadvantage to cross-dominant shooters. Many of whom will place their face on their strong-arm bicep to properly line up the sights with their dominant eye.

The primary downside to the Chapman shooting stance, is it is not a natural shooting position. It requires a significant amount of practice to make it “natural” and it is a slower stance to assume.

As you can see, your physical traits, the situation at hand, as well as body-armor status, all help to determine which shooting stance is best.

I practice the Power Point stance using both my left and right hand as the strong hand. I do this because I need to be sure I can control my gun one-handed, with either hand.

That skateboarding accident cannot be relied on to only affect the off-hand.

I typically shoot from an aggressive combat version of the Weaver. It works for me in 3-Gun, and I feel well-balanced in a deep crouch with much of my weight forward.

I have not spent significant time using the Chapman, as I don’t have a recoil issue with most guns I shoot and I am not cross dominant. It is great for people in either of those situations.

On the rare occasions I am armored up, I tend to find myself somewhere between a Power Isosceles and a more squared version of the Weaver stance.

That is my way of saying these stances are on a continuum. You are not locked into one of these variants, just be aware of why you are doing what you are doing.

For example, Power Point is a very poor choice when both hands are available and you are in armor.

Attempting the Chapman while trying to keep a baby secure from rabid dogs would also be improper, if not impossible.

What is your favorite shooting stance? Why? Let us know in the comments section below!