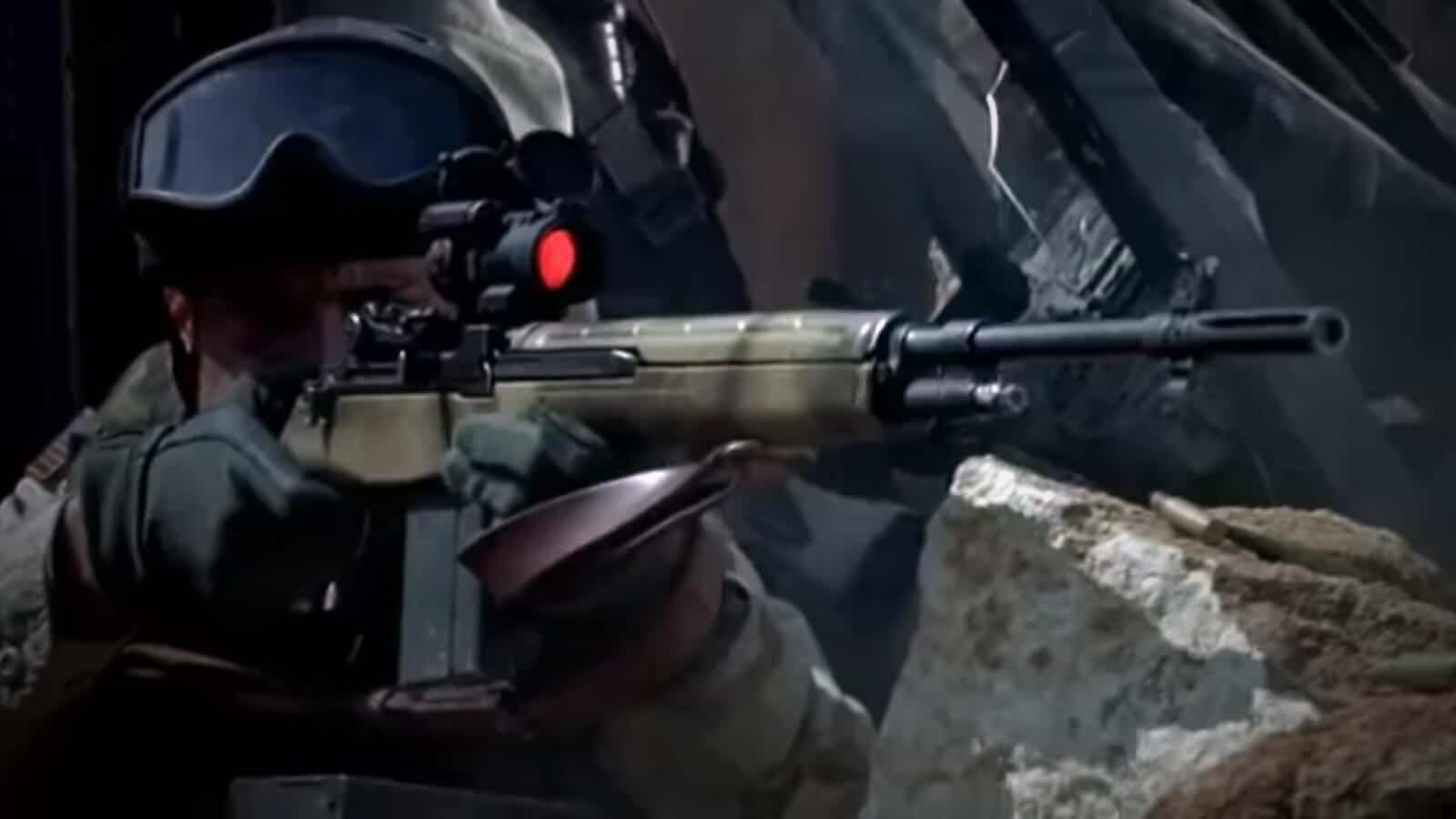 While the M16 family of firearms — from Vietnam-era films through the M4 Carbines seen everywhere in movies today – is the big star of the big screen, the reliable and rugged 7.62mm M14 has also played a role as well. But, that role has sometimes been more as a supportive player. Why? It might stem from the fact the M14 was the standard infantry rifle for the U.S. military for a relatively brief time — although it is still soldiering on through today in one form or another.

The M14 was adopted in a time of relative peace — after the Korean War, and only being used in the early days of the Vietnam War. This might be why it has not appeared in as many films and television shows as the M16, or the M1 Garand before it. Interestingly, it even took six years from its introduction until the James Bond film Goldfinger was released in 1964 for the M14 to actually make its silver screen debut.

Even then, the M14 is only seen in sequences filmed at the very real Fort Knox when the soldiers are sprayed with nerve gas. The production crew was told to have the pilots fly at above 3,000 feet, but to get the right look they flew at 500 feet — much to chagrin of the U.S. Army at the time.

A little-known piece of Hollywood trivia is that the men seen “fainting” from the gas were also the same set who moved to different locations during filming, but in all those sequences these men have the M14, which was in use at the time at the real Fort Knox.

Keen-eyed viewers will notice there isn’t a single M14 seen in the shootout with Goldfinger’s Chinese soldiers, however. That is because the vault scene was filmed at Pinewood Studios outside of London, and the production was unable to obtain any M14s. Instead the U.S. soldiers are armed with a mix of submachine guns and M1 Carbines!

The 1968 release The Green Berets starring John Wayne was the first Vietnam War movie to feature an M14 on screen, yet the rifle is still only in a few scenes, and most notably in one sequence showing U.S. soldiers arriving “in country.” As the film was the only Vietnam War movie to have the full support of the U.S. military, it is likely those were real U.S. Army soldiers who were carrying the M14 rifles, which were still used in training even as the M16 was being issued to those sent to fight the real enemy.

Also worth noting is the fact that the M14 can be seen used by friend and foe alike in The Green Berets. In fact, little attention to authenticity of the enemy’s weapons was paid, and the “VietCong” carry a mix of M14s, M1 Carbines and a variety of bolt-action rifles. What was also notable was the M14 wasn’t seen again in a Vietnam War film until the release of Gardens of Stone in 1987 followed by Full Metal Jacket that same year.

It may come as a surprise given that the M14 did see a fair amount of use in Vietnam, yet many of the early Vietnam War films including The Deer Hunter and Apocalypse Now did not feature a single M14 on screen. While the M16 had largely replaced the M14 by the period in which those films take place, it still seems odd that not a single one of the older rifles appears at any point. However, it should be noted that The Green Berets didn’t feature a single AK-47, simply because it was impossible for the filmmakers to acquire any.

The M14 is finally quite prominent in the 1987 film Full Metal Jacket, which was directed by the late Stanley Kubrick who was known for his attention to detail. The rifle is as much a star as any of the actors in the U.S. Marines boot camp training scenes.

That particular film is also notable for featuring the late R. Lee Ermey, aka the infamous “Gunney” from various History Channel programs. Ermey was originally just an advisor but convinced Kubrick he could play the role of U.S. Marine Drill Instructor Hartman — and this included a completely improvised sequence of insulting and “colorful” dialog, much of which was later used in the script! It is impossible to think how anyone other than Ermey or any other rifle, including the M16, could have been used in the film’s boot camp sequence.

Carried by “Both” Toms

John Wayne may not have actually carried an M14 in The Green Berets, but two arguably “bigger” stars used the weapon on the big screen — Tom Cruise and Tom Hanks. The former Tom could be seen carrying the M14 in the 1987 biopic Born on the Fourth of July about the life of soldier turned anti-war protester Ron Kovic. The sequences of Kovic in Vietnam take place in January 1968 when the M14 was still largely in use, as the process of it being replaced by the M16A1 was only in the early stages.

Despite being more accurate for the time period, the M14 also fits the story better as this was before the public opinion had largely turned against the war and how it was being handled by the government.

That could also explain the use of the M14 in the 1994 film Forrest Gump, where Tom Hanks as the title character can be seen with an M14 in the brief bootcamp sequences – also harkening back to Full Metal Jacket. Gump and his pal Bubba disassemble and reassemble the rifle, and yet while Gump is lauded for being so efficient with the M14, he can be seen carrying the M16 in subsequent scenes set in Vietnam.

The M14 continued to be seen in a few films in the latter stages of the Cold War — which is fitting as it has remained a reliable choice by Special Forces operators. Perhaps the film that features the weapon in this role most prominently is 2001’s Black Hawk Down, which chronicled the U.S. Army’s actions in Somalia in 1993 following an attempt to extract several high-value warlords. Released mere months after the horrific events of 9/11, the film shows the heroic actions of members of America’s armed services.

The fact that the M14 is the weapon of choice in scene in which a Delta Force operator willingly goes into combat knowing his chances of survival were minimal at best also highlighted why our Special Operators remain second to none!

Any round-up of the M14 in the movies would be remiss not to include Springfield Armory’s M1A, the civilian semi-automatic version of the M14.

The M1A’s biggest screen appearance was in the 2012 thriller Jack Reacher, starring Tom Cruise. While Cruise doesn’t use the weapon in this film, he does hold one at various times as the rifle was also quite crucial to the plot. Among the actors who did get to use a Springfield Armory M1A in Jack Reacher was screen legend Robert Duvall, who played a former USMC Gunnery Sergeant and handled the rifle just the way we’d expect from an old vet!

While the M14 may have been a supporting character on the big screen in many cases, it’s role as a heavy-hitter with those in the know is beyond question. So, keep an eye out for it in future films and television shows, and be sure to check out the Springfield Armory M1A for yourself if you’d like a semi-auto civilian rifle sibling of a classic military warrior.