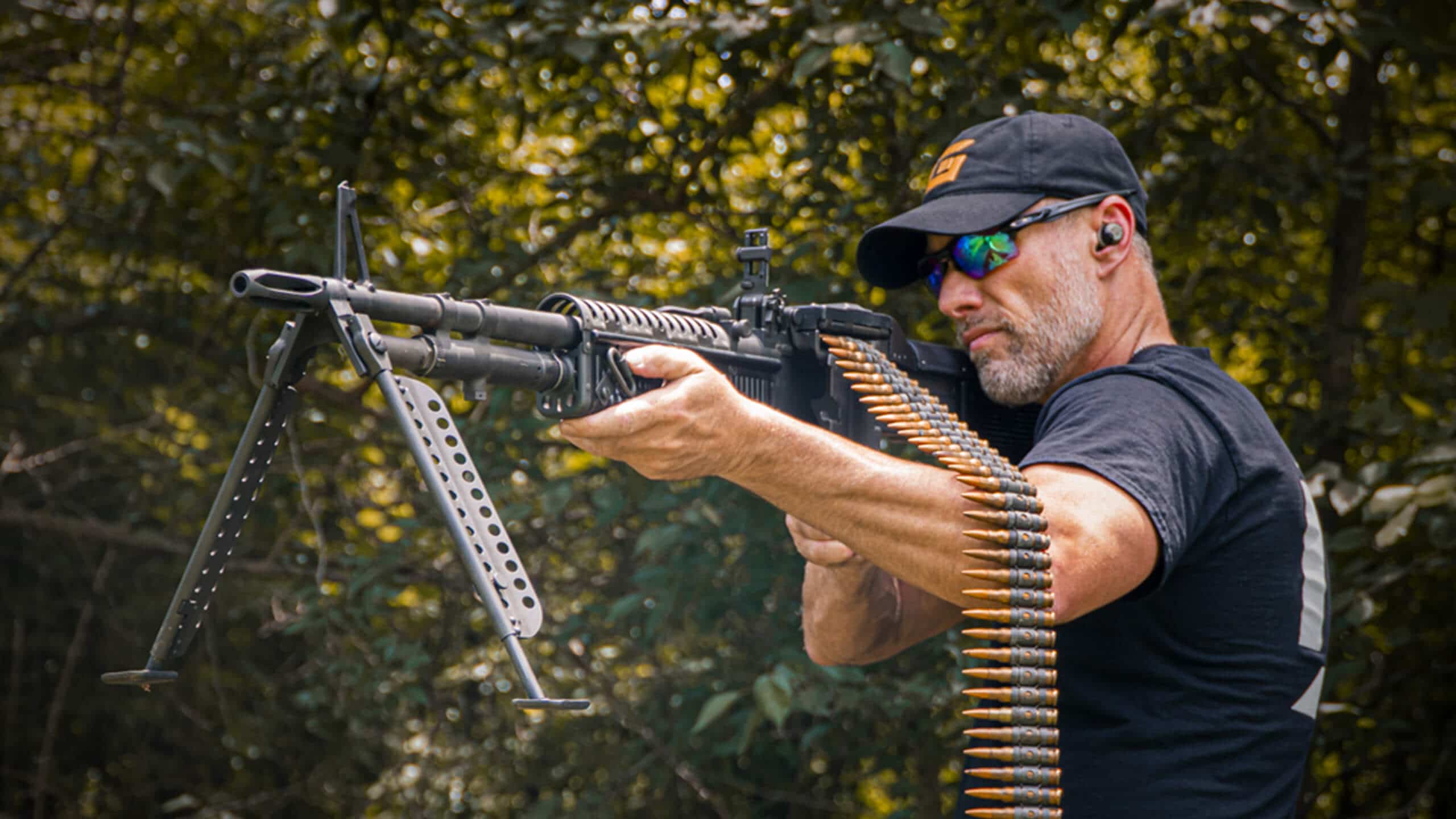 Hello, I’m Dylan from GunSpot, and in this article we’ll be taking a look at the M60 machine gun. Check out my video above and be sure to keep reading below.

We have a vault full of machine guns here at GunSpot, and let me just say the M60 is probably our favorite machine gun. These things shoot great and have an iconic look, so they have appeared in many of our videos, including some of our not so serious ones. Seriously, this gun is a lot of fun to shoot and has a really interesting story behind it.

When it comes to the history of machine guns, they were often too big for one man to carry. They could put out a lot of firepower, but early machine guns like the Maxim gun and the Browning machine guns could take anywhere from two to four people to move and operate.

As you got closer to World War II, the world saw the introduction of more mobile and lightweight machine guns like the infamous MG42 (also known as Hitler’s buzzsaw) that fired a stunning 1,100 to 1,200 rounds per minute. That gun was significantly smaller and lighter than earlier machine guns, but still wasn’t able to be carried and used by just one man. This led to the invention of the M60 machine gun.

Upon entering service in 1957, the M60 represented America’s answer to the question of how to best develop a portable and capable machine gun (to learn more about earlier attempts at developing an automatic rifle like the BAR, click here; to learn about efforts to adapt the M14 to into a “light machine gun,” click here).

The belt-fed M60 was chambered for the 7.62x51mm NATO (.308) cartridge and fired a relatively sedate 550 rounds per minute at the slowest (up to a possible 650 rpm). It weighed a reasonably light 22 lbs., which is much lighter than earlier machine guns. And it featured an overall length of about 43″, with 22″ of this made up by the barrel system. These compact dimensions and light weight, along with the slow rate of fire, made the M60 a gun that could be managed and operated by just one shooter.

Most of the M60s we see at GunSpot have a fixed front post sight and then a rear adjustable flip-up sight. The belt-fed gun is gas-operated and fires from an open bolt. It employs a disintegrating belt and can spew out rounds at a muzzle velocity of 2,800 feet per second. For me, the ejection side of the M60 is mesmerizing to watch as it spits out empty casings and disassembled links. The effective range of the M60 is 1,200 yards, even though it would not be incredibly accurate at that distance.

The M60, just like the MG42 before it, paved the way for more machine guns of its kind. This gun was so light and versatile, it was used among many facets of the United States military. It was used by individual soldiers, naval patrol boats, larger vessels, helicopters, fixed-wing aircraft, wheeled vehicles and more. The M60 could be carried or mounted easily, so it was used virtually everywhere.

You can find guns like this M60 for sale (see link at the bottom of this page) on GunSpot.com. Yes, machine guns just like this can be bought by civilians like you who can legally own them. But, you better start saving your pennies! Transferable M60 machine guns are usually listed for sale around the $50,000 to $60,000 range.

Let us know in the comments what other machine gun videos you want to see, or what machine gun is your dream gun.