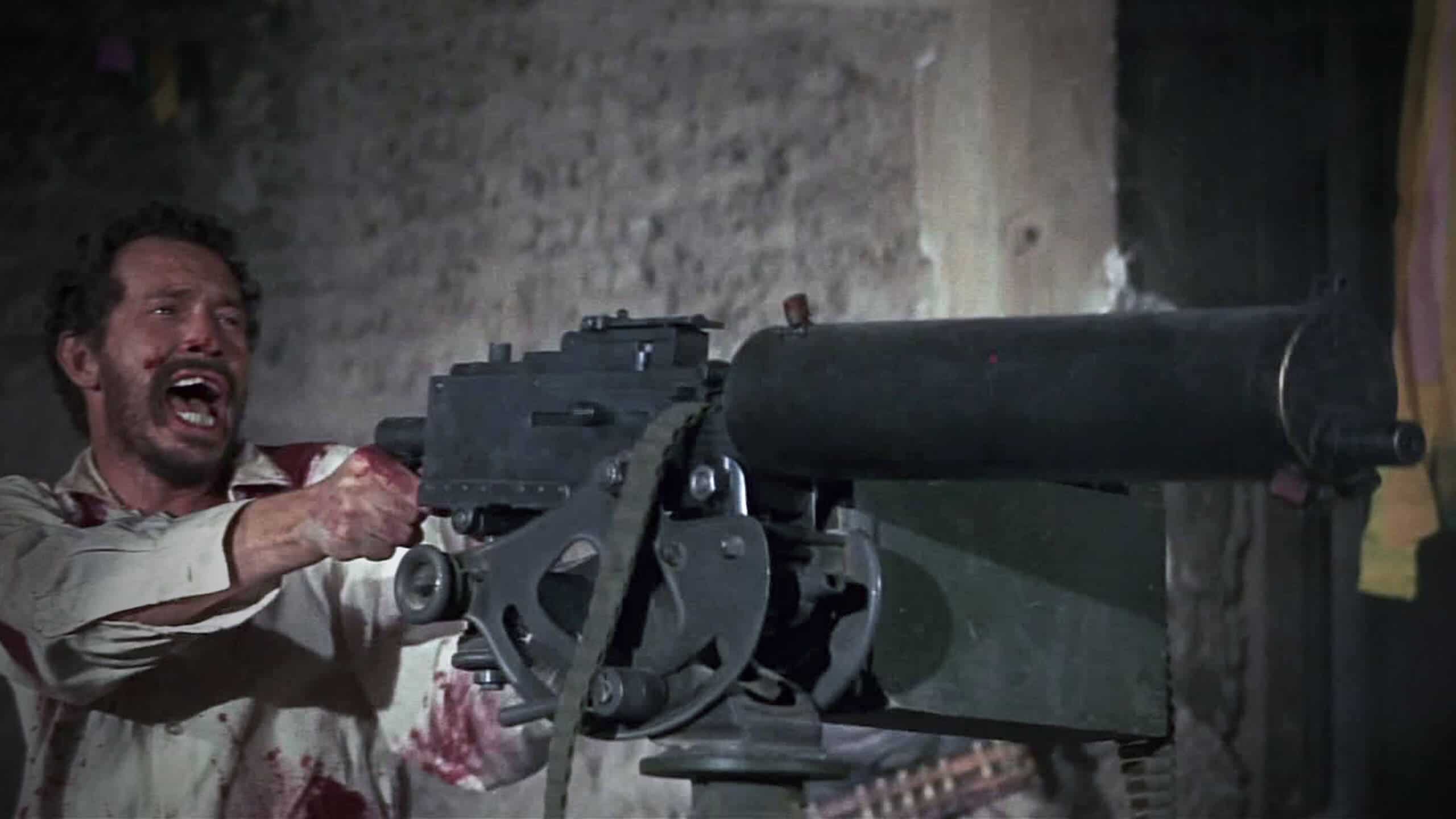 When watching an action film, war movie or western, there are a couple of things to remember. First, movies aren’t history or reality — what you see on the screen is meant to entertain, not necessarily inform. For this to be possible, movies require a certain level of “suspension of disbelief,” so we have to accept that the action hero can fire repeatedly without reloading, that the slides of semi-automatic pistols don’t always lock back when the firearm is emptied, and that even the best of historic consultants aren’t going to be able to perfectly match a firearm to the era — or be listened to by the director.

The most glaring example of this to my mind is the use of the Model 1892 lever-action, which actually debuted at the closing the American Frontier, yet became Hollywood’s “go to” for countless westerns. It was carried by John Wayne in dozens of films, and in some cases with the distinctive oversized “loop lever.” Chuck Connors also carried one in television’s The Rifleman, as did Steve McQueen in Wanted: Dead or Alive. The reason the Model 1892 became iconic in the movies and on television was because, unlike many of the earlier models, it was still in regular production and looked close enough to the earlier lever-action firearms.

For years, firearms that were “close enough” were typically used in television and films, and some firearms have stood out quite badly. I decided to compile a rundown of some of the worst offenders in films I have seen, and offer some suggestions of what should have been seen instead.

The 1962 epic, which chronicled the life of the very real T.E. Lawrence, is an example of the golden age of Hollywood epics that strived for realism when the average films cut every corner possible. It was made at a time when studios too often filmed on the back lots around Los Angeles.

Instead, the production took place in Jordan and Morocco as well as in Almería and Doñana in Spain. While not an overly action-packed film as war movies go, this was in part because director David Lean found that it was unnecessary to have lengthy combat sequences that didn’t advance the plot. However, one sequence that was supposed to be included was to show the brutality of the fighting and involved Lawrence’s troops massacring a Turkish unit. However, it was cut as the Moroccan army extras proved to be too impatient and uncooperative but it actually works better because we only really see the aftermath of the killing.

Instead, the standout epic action sequence in the film is the camel attack on Aqaba, which actually is far more dramatic than the real life attack that occurred.

To add to the realism of the conflict, the production featured plenty of notable firearms including the correct M1914 Hotchkiss and Vickers machine guns (at least some of them), Lee Enfield rifles and even period-correct artillery. But in the camel-mounted attack, the Turks defend some positions with Browning M1919 machine guns — a version of the weapon seen about three years too early, and by the look of the flash hinder and tripods the models were World War II vintage or later! The machine guns were no doubt from the Spanish Army as that scene was filmed on a dried river bed in southern Spain, but it was unfortunate that no attempt was made to dress them up.

The German MG08, which has appeared in numerous films including Gallipoli and War Horse was widely used by the Ottoman Empire during the First World War and would have been a better choice than the M1919 machine guns.  Even adding faux water jackets to the Browning M1919s would have helped make those weapons seem a little more appropriate.

This 1969 western, which takes place at the final days of the American frontier, may be director Sam Peckinpah’s greatest masterpiece. There are a few expected issues with firearms, notably in the fact that while many of the characters carry M1911s, due to the issue of blanks not functioning in them, the .45 caliber pistols were replaced in some scenes by the smaller but similar-looking Spanish-made Star Model B in 9mm. It is a minor nitpick, and even eagle-eyed viewers would have to look closely to tell the difference (to see more about this, click here).

The bigger issue is with a key point in the plot, which involves Pike Bishop (William Holden) and his gang stealing U.S. Army machine guns for an officer in the Mexican Federal Army. The guns are the .30-06 water-cooled Browning M1917, which is a complete anachronism as the film takes place around 1913 while the gun wasn’t introduced until 1917.

This was clearly a problem that Walon Green, who wrote the screenplay with Peckinpah, likely couldn’t resolve. Stealing hundreds of M1903 Springfield rifles would have been more accurate, but the German military was already supplying Mexico with Mauser rifles. As for machine guns, the U.S. military was actually still using the aging Colt Browning M1895 “Potato Digger” machine gun, which was too antiquated by the time the movie is set. Simply put, there was no weapon that the gang could steal that could make the same impact at the end of the movie.

Whether you view this 1970 release as a rousing patriotic film that honors the U.S. Army’s greatest general or you see this as an anti-war film that highlights the futility of war and the bloodlust and glory seeking of that general, it is still easy to see why this won an Oscar for Best Picture, while George C. Scott also deserved a Best Actor award. The film’s not perfect, however. The timeline is messy at points and it suffered from a similar issue of other war films of the era — relying on whatever tanks were available to stand in for World War II armor.

The film gets many small details correct including the guns carried by General Patton — and he gets to show off his Single Action Army where a reporter asks about the “pearl-handled revolvers,” to which the general responds, “They’re ivory. Only a pimp from a cheap New Orleans whorehouse would carry a pearl-handled pistol.”

And yet one small detail does stand out. The Moroccan troops that line up for inspection carry the French MAT-49, a submachine gun developed after the war.

Here is another case of the Moroccan Army (which should be Moroccan volunteers for the French Army if we’re really nitpicking) showing up with their real guns of the era. However, it would have been impressive to see the soldiers carrying the correct MAS-38, a unique submachine gun developed just before the outbreak of the Second World War.

We also would have liked to have seen some Sherman and Panzer IV as well as a few Tiger tanks too, but that’s a complaint for another time.

Duck! You Sucker (A Fistful of Dynamite)

This lesser-known film is included because it features some of the worst examples of out-of-time firearms, but also contains some of the small arms we’d expect to see in the period in which it is set. Either way, by no means would this 1971 western by director Sergio Leone ever be considered a classic, but as his last true western and most overlooked film of his career, it has its moments.

It tells the interesting story of an Irish explosive expert who escapes his homeland and heads to Mexico only to get mixed up in another revolution. The film is quite notable for its depiction of the Mexican Revolution and features a fairly decent story, but it is distracting for its inclusion of so many anachronistic firearms.

Period-appropriate firearms such as the Colt Single Action Army, Steyr M1912 and Model 1894 lever-action can be seen — but given that the film is set in 1913 there shouldn’t be the Browning Hi-Power, introduced in 1935, but perhaps it is standing in for the Colt M1911. There was also the Walther P.38, introduced in 1938 – but maybe a P.08 Luger was what the production team had in mind. Or most notably, there was an MG42 from World War II, which we just can’t explain!

Several Czechoslovakian Vz. 37 machine guns are also present in one scene, but these at least could be a stand-in for that aforementioned M1895 “Potato Digger” as the weapons do have a similar shape. Given that the Vz. 37 isn’t widely known this almost seems like a reasonable option. Yet, overall, it almost seems as if the armorers simply included every firearm at their disposal, and not in a good way!

The inclusion of such out-of-place firearms is made odder by the fact that the period-appropriate MG08 is in fact seen in several sequences. Had the production stuck with the MG08 instead of the MG42, we could almost overlook the other misplaced weapons.

Raiders of the Lost Ark

As fans of TV’s The Big Bang Theory likely already know, it has been established that pretty much everything Indiana Jones (Harrison Ford) does is essentially meaningless, as the Nazis still obtained the ark and died as a result! But what is often less noticed is that much of the film doesn’t make a ton of sense — the British military had a major presence in Egypt in 1936, so a company of German soldiers would certainly be noticed!

However, much of the equipment and uniforms seem correct, even though it’s just about four years too early. The same is also true of the MP40 submachine carried by many of the German soldiers. The film is even set two years too early for it to be an MP38, but the biggest anachronism is the inclusion of an anti-tank rocket.

No such weapon existed at that point in history, and the film’s armorer, Simon Atherton, simply mocked up something that sort of looked like a World War II-era anti-tank weapon. However, it is a Chinese Type 56, a copy of the Cold War era Soviet RPG-2, with a shoulder grip from an M9 Bazooka.

The German soldiers could have been armed easily enough with the MP28 or MP34 submachine gun, and the former was even seen in the film Indiana Jones and the Last Crusade! Either of those guns would have been far more appropriate, albeit less iconic, for the period.

As for the rocket launcher, the oversized Mauser 1918 T-Gewehr likely wouldn’t have had the same effect, so we’ll just accept that if the Nazis can waltz into Cairo and steal a priceless piece of antiquity that has eluded man for several millennia, perhaps they had a prototype rocket launcher, too!