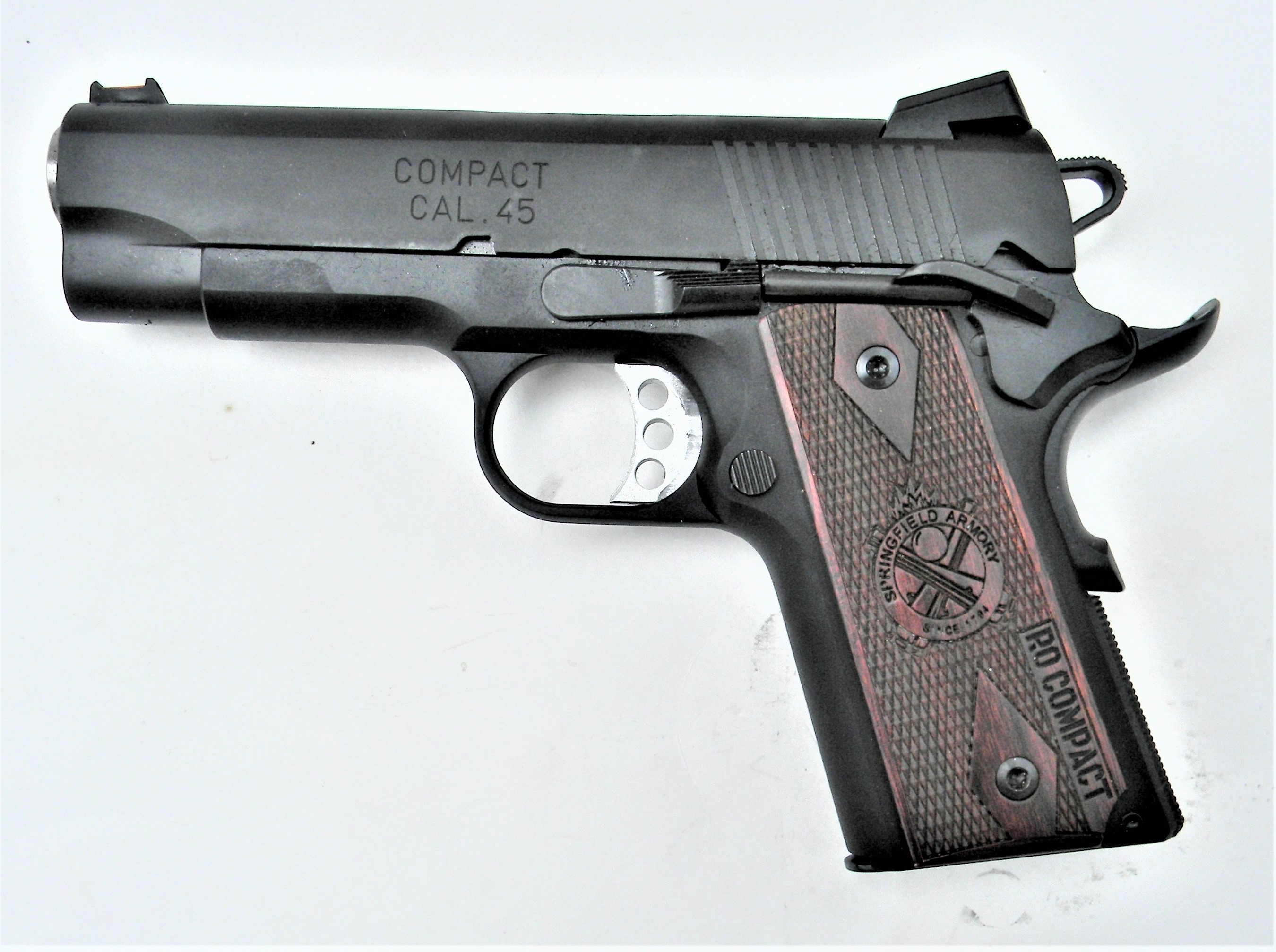 Springfield Armory has become one of the most trusted names in 1911 handguns.

They began offering an affordable 1911 GI-type pistol and eventually manufactured top-end pistols, such as the Bureau Model and TRP.

The 1911 is a legendary pistol that all makers don’t get right.

You can go too cheap and cheap isn’t good when it comes to hand fitting and the care demanded in the manufacturing of a good quality 1911.

Springfield pistols are not cheap, but they are affordable.

The Range Officer line is a version of Springfield’s 1911 handguns that feature good fit and performance, but do not exhibit the same high-grade finish as the more expensive Springfield handguns.

The Range Officer line is sometimes referred to as a pistol that performs better than its price would indicate.

It is a quality pistol, but not as nicely finished as some of Springfield’s offerings. The 4.0-inch barrel and steel slide use a dual recoil spring and full-length guide rod to ensure reliability.

The slide cannot recoil as far as a conventional full-length slide, so the tilting barrel of the 1911, to be retained, had to be redesigned.

The Officer’s Model, originally designed by U.S. Army gunsmiths, features a belled barrel for lockup. The barrel bushing is done away with.

The Springfield Compact uses this lockup. The barrel is fitted well to the slide. The slide moves smoothly over the locking lugs and everything locks up tight.

The shorter grip frame makes for good concealment and the light weight makes for easy carry.

Trigger compression is smooth and crisp at 5.5 pounds even. The pistol features a fast reset, sometimes more important than a crisp compression during tactical shooting.

The pistol features the attractive traditional crossed-cannon checkered grips. The pistol is supplied with two seven-round magazines, a step up from the usual six-round magazine in compact size .45s.

Disassembly isn’t more difficult than the full-size 1911, just different, and is simple after a few practice runs.

The slide, barrel and recoil assembly may be removed from the frame in one piece. During firing, the white-outline rear sight contrasts well with the red fiber-optic front sight.

It isn’t difficult to get on target quickly and stay there. While recoil is greater than with a steel-frame pistol or a Government Model .45, it isn’t unpleasant.

It simply takes a little longer to recover between shots. This is a reasonable expectation for a small handgun.

In the 1911 world, a compact pistol is easy to carry, but simply will never shoot with the big guns.

Just the same, we are talking personal defense not IPSC, and the compact 1911 is a very good shooter.

During the test I added both MecGar and Wilson Combat magazines. Function was good with each.

I primarily used Federal American Eagle 230-grain ball ammunition during this evaluation. The pistol is properly regulated for the six o’clock hold at 15 yards.

The pistol is fast on target. Fire, recover the sight picture as the trigger resets and fire again, and you have good solid X-ring hits.

There is nothing faster to an accurate first-shot hit than a 1911 properly carried cocked and locked, hammer to the rear and safety on.

As for accuracy, from a solid firing position the Springfield Armory Range Officer Compact is an accurate pistol.

Using the new Federal Punch 230-grain JHP, I fired two five-shot groups from the barricade at 15 yards. The average was a two-inch group.

That is more than good enough for personal defense. The Springfield Armory Range Officer Compact is a good, perhaps even outstanding, lightweight 1911.

For those willing to master the piece, it would be difficult to be better armed with any handgun in this weight class.

Have you shot the Springfield Armory Range Officer Compact? Tell us what you thought in the comments section below!