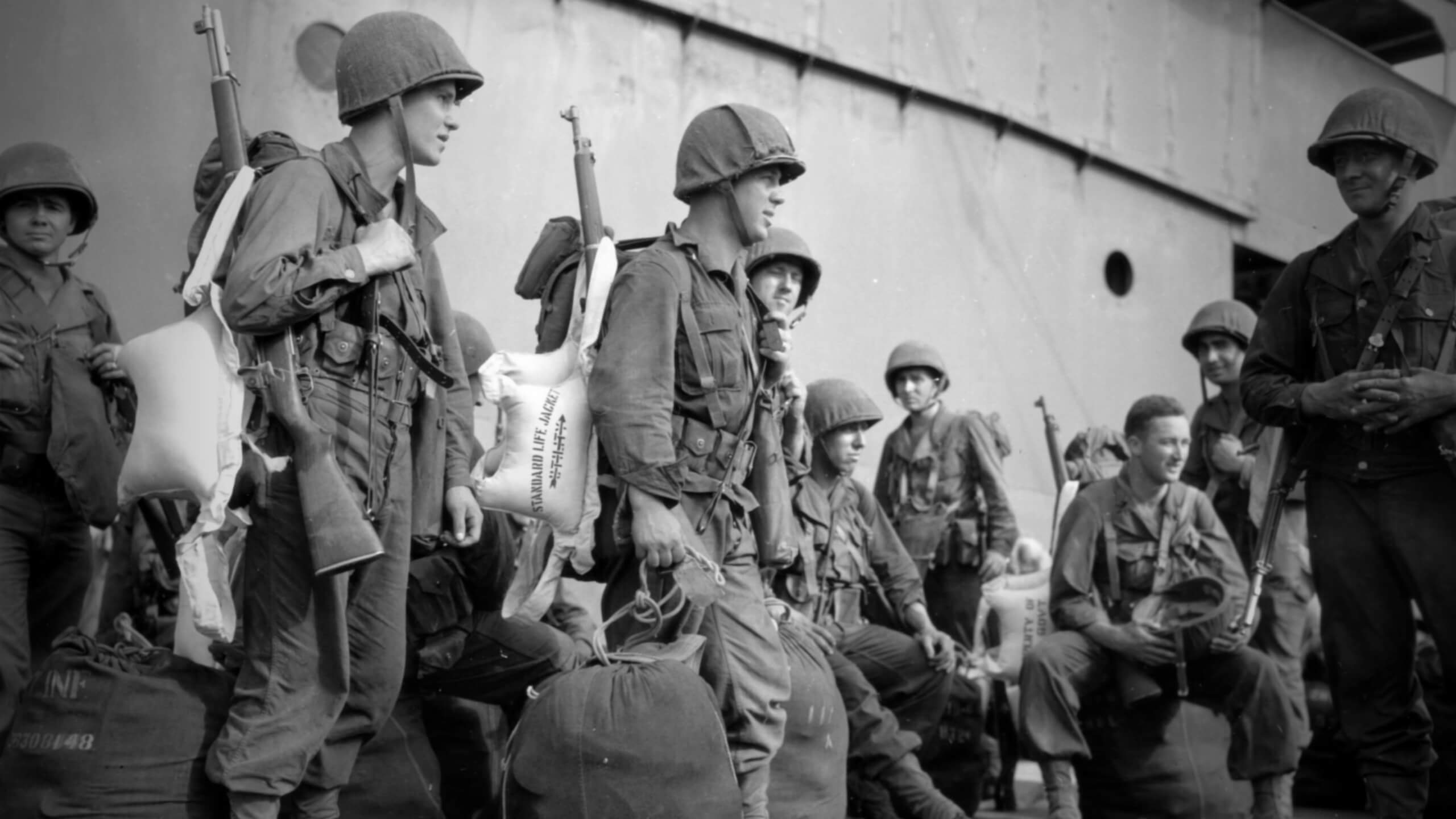 Right now, many who read that headline are thinking “Why would you even ask such a ridiculous question?” Not so many years ago, I would have reacted the same way. However, after a great deal of research into the topic, I’ve come to the conclusion that it is a completely legitimate question to ask.

The United States was the only combatant nation to use a semi-auto battle rifle on widespread basis. Germany, with its G41, G43 and Sturmgewehr StG44 (to learn more about that rifle, click here), and the Soviet Union with its SVT-40 (to learn more about that rifle, click here), also deployed semi-auto (and select-fire) rifles in combat, but never in any numbers close to the amount of M1 Garand rifles made and used. Also, German and Soviet manufacturing could never satisfy their troops’ demand for rifles period, much less produce semi-auto rifles to meet their needs.

Herein lies an undiscussed challenge: despite the more than five million M1s made during World War II, there were never enough Garand rifles allocated to meet the needs of all of America’s combat troops. So how did we pick up the slack? The answer: the venerable M1903 Springfield rifle.

At the turn of the 20th Century, most major military forces around the world had adopted a modern bolt action rifle. America followed this trend with the M1903 rifle (updated to fire the new .30-06 round in 1906). A contemporary of the German Mauser and British Lee-Enfield, the M1903 quickly joined the ranks of the greatest bolt-action rifles ever made.

Before World War I, the M1903 was manufactured at Springfield Armory in Massachusetts as well as Rock Island Arsenal in Illinois. Production was steady but not particularly great in number. When America finally entered World War I in April 1917, the U.S. military found itself without enough M1903 rifles, and the M1917 “Enfield” was produced in large numbers to meet the demand for battle rifles.

Even as M1903 production ramped up, the M1917 became America’s most-used combat rifle during the Great War. Afterwards, the M1917 rifles went into storage and the M1903 was issued across the board to the U.S. Army, Navy and Marine Corps.

Battle-tested and supremely accurate, there were few complaints about the M1903. However, the forward-thinking leadership of U.S. Ordnance began to work on semi-auto rifle designs as early as 1922. John Garand was hired and after a great deal of experimentation, the M1 rifle was born (to learn more about John Garand and his rifle, click here).

In 1936 the M1 was officially adopted, but even though there was much discussion about the new rifle, deliveries to the troops were very slow. Certain issues with the original M1s cropped up and many of the “gas trap” rifles were reworked (to learn more about the “gas trap” rifle, click here). Even so, on the eve of World War II most American troops were still armed with the M1903.

Many firearms enthusiasts see the M1903 as nothing more than a training rifle during World War II. Others recognize its use as a sniper rifle, and the eventual development of the M1903A4 sniper variant. Over the years, few have acknowledged the critical role it played as a battle rifle, not only in the earliest days of the war when the issue was in doubt, but also as America turned the tide and was progressing toward victory.

When Japanese aircraft attacked Pearl Harbor on December 7, 1941, Springfield rifles fired some of America’s first shots in anger. When the Japanese invaded the Philippines, M1903 rifles were favored over the new M1 rifles for one simple reason: U.S. Ordnance logistics was not completely familiar with the new Garand rifle, and too few of the unique “en bloc” clips were available to the island defenders.

While the M1 rifle performed well in the defense of the islands, American troops using the M1 were reduced to searching for their ejected clips, and then reloading them by hand while under fire. The old Springfield was free from any of the new semi-auto rifle’s technological issues.

When the Marines went on the offensive on Guadalcanal during August of 1942, they carried the M1903 with them, and the Springfield was the primary battle rifle throughout the fighting there. Even as the U.S. Army began to appear in the Solomon Islands campaign, not every G.I. carried the M1 Garand. Many Army units in the PTO were equipped with a mix of M1903 and M1 rifles until the end of 1943, and the M1903 remained in USMC first-line service until the end of WWII. The reasons for the M1903’s combat longevity are easy to see — reliability, flexibility and, based on the preference of the rifleman, some considered the M1903 to offer greater accuracy.

The story is essentially the same in the MTO (Mediterranean Theater of Operations) and the ETO (European Theater of Operations). U.S. Army units participating in the invasion of North Africa in November 1942 came ashore with more M1903 rifles than M1s, and this remained the case throughout the fighting in Tunisia. More M1 rifles began to appear as the fighting moved to the Italian mainland, but the M1903 was still regularly seen as a battle rifle until the early months of 1944. The need for rifles was spread across all of the U.S. military, and consequently the Springfield rifle fired shots in anger while serving with the U.S. Navy and the Coast Guard.

The M1903 came ashore in Normandy on D-Day and fought until the end of the war in Europe, particularly in the hands of MPs, combat engineers and artillerymen. My father joined the Army in early 1942 and his initial training was all conducted with the M1903. When the M1 was introduced to his unit in 1943, he retrained (and requalified as a marksman) with the new rifle.

By the time he went into combat in Normandy in June 1944, the M1903 was still around. He commented: “If a G.I. got his company commander’s approval, he could take a Springfield rifle into combat as opposed to an M1.” I wish he was still here for me to pester him with questions about the subject, but at least I got a little bit of his first-hand knowledge of the issue to share with you.

In combat, the M1903 had one distinct advantage over the wartime M1 rifle — grenade launching. The Springfield rifle used the simple M1 Grenade Launcher, and ultimately the M1903 was the U.S. military’s most effective grenade-launching platform during World War II.

The critical difference is that M1 Launcher used on the M1903 allowed the rifle to fire grenades as well as firing standard rifle ammo in the normal way. The M7 grenade launchers for the gas-operated M1 Garand limited the functionality of that rifle to being a specific grenade launcher while it was fitted.

When an M1 rifle was fitted with a launcher, it took one rifleman out of the firepower of his platoon. However, if the grenadier used an M1903, he could instantly alternate between grenade-launcher and rifleman, and his company retained most of its rifle firepower.

Even with all the M1 rifles produced during the war, and on top of all the M1903 rifles that had been made before World War II, America still needed more rifles. To help with emergency production, Remington brought the Rock Island tooling to its facility in Ilion, New York and began making M1903 rifles to the same specifications and quality as those produced in World War I.

However, even that was not enough, and so the revised and simplified M1903A3 was introduced on May 21, 1942. The original M1905 sight and its fixed base were redesigned and replaced with an adjustable rear sight. This modification saved time and money, and ultimately provided a better battle sight for the rifle.

The M1903A3 did away with the Springfield rifle’s traditional elegance, introducing many stamped metal parts, a simplified stock and noticeably reduced “fit and finish.” Production at Remington was supplemented by additional manufacturing by the Smith & Corona Typewriter Company, beginning in February 1942. All of these rifles performed well, and many served in combat.

Was It Really Needed?

As the M1903 was an exceptional and capable rifle, did we really need the M1 Garand? Most certainly, yes. The M1 Garand is legitimately “the greatest battle weapon ever devised.” It’s one of the cornerstones of Allied victory in World War II, and a shining example of America’s Arsenal of Democracy.

Could we have won the war without the M1 rifle? I believe that we could have, but it would have taken longer, and cost more lives to do it. The M1903 Springfield was the equal or better than any Axis bolt-action rifle. Also, the qualities of the American rifleman are unmatched. Many Americans are natural-born marksmen. However, the advantages of the Garand are hard to dismiss.

In reality, in our soldiers’ hands, the M1903 or the M1 was a war-winning weapon. Thankfully we had both at our disposal during World War II and ultimately did not have to choose.