In the world of pistol caliber carbines, few guns look more different than the traditionally-styled Ruger PC 9 and the futuristic, folding Kel-Tec Sub-2000. Yet, these guns have more aspects in common than not — plus, they’re both designed for a very specific role — survival.

Even if neither company directly markets their large-bore, low-recoil blasters as survival guns, their features are irrefutably those of bug-out or survival weapons. So, despite their aesthetic differences, the two firearms share a tremendous amount of operational, and thematic design elements. As such, let’s put the two guns to the test, and see which one shooters should spend their hard-earned dough on.

This article is from October 2018.

While externally, the Ruger PC 9 and Kel Tec Sub 2000 are diametrically different, their core method of operation is actually identical. Indeed, the two guns are both semi-automatic, magazine-fed, direct blowback firearms. Meaning, neither of the firearm’s action locks or delays the release of expanding gas escaping from a fired round.

Instead, the bolt is held in battery purely by the force of the recoil spring and the weight of the bolt/carrier itself. This is the most simplistic method of operation for any auto-loading firearm, and is extraordinarily reliable — but this method does have its drawbacks.

For starters, because the breech isn’t locked or delayed (and FYI you’ll often see in older texts, this delay referred to as “retarded”) the recoil impulse tends to be disproportionately stouter than a carbine of otherwise identical stats whose action is delayed or locked.

Secondly, because direct blowback needs the bolt and carrier to be sufficiently hefty enough to reduce the cyclic rate or carrier speed to a more reliable velocity, this method of operation tends to make these guns unnecessarily heavy.

Not All Doom and Gloom

This isn’t to say that firearms utilizing direct blowback don’t have their advantages. Anyone familiar with Ian Fleming’s world-renown super-spy James Bond could guess that his direct blowback Walther PPK must be well-suited to clandestine activities, and dispatching bad pun-named villains. 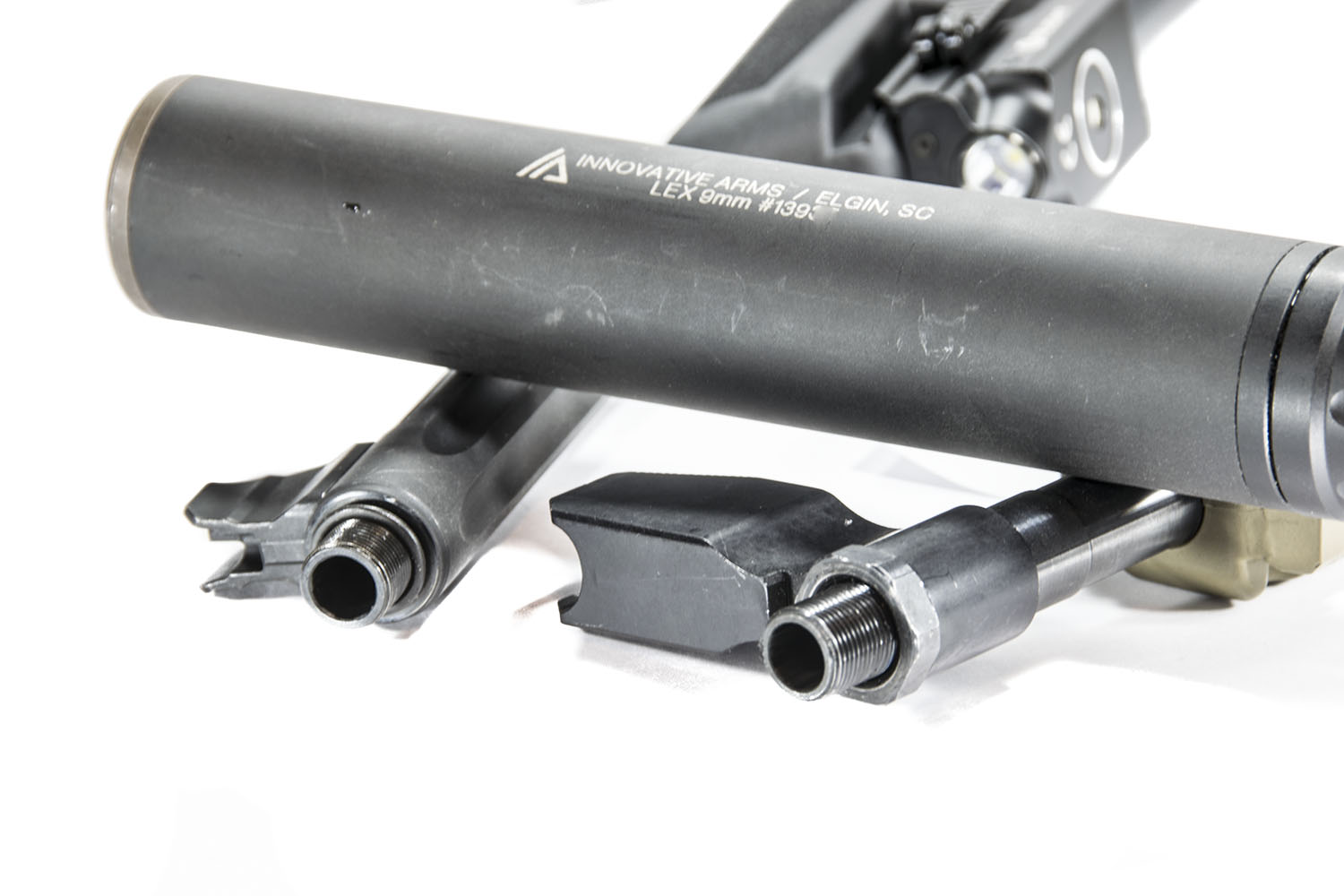 Indeed, one of the best attributes of direct blowback firearms is their compatibility with sound suppressors — something agent 007 wouldn’t be caught without. This is because direct blowback guns aren’t as sensitive to changes in operating pressure or internal velocity changes as say, a locked-breech design like an MPX, AR-15, or even a 1911.

Additionally, in the case of handguns, the barrel of direct blowback-operated designs doesn’t tilt or move. So the addition of a sound suppressor at the muzzle won’t affect the movement of internal parts.

Lastly, direct blowback firearms are usually very simplistic. This means there are fewer parts and thus fewer areas that could experience malfunctions. Simple is good. Simple is reliable.

Stats, Numbers, and Other Fun Stuff

Let’s get down to brass tacks. The Ruger PC 9 carbine features a fluted, 16.12” bull-barrel, whereas Kel Tec’s Gen 2 Sub 2000 ships with a 16.25” standard-profile barrel. Does the extra tenth of an inch matter?

There are no measurable gains in muzzle velocity of one over the other, and in testing, both carbines were effectively as accurate as one another.

The overall length of the Ruger is just over 34 inches, while Kel Tec’s folding firearm is a stubbier 30.5 ininches. Personally, the difference seemed greater than it felt, but neither gun felt exceptionally long or unwieldy.

A more appreciable difference between the two is the weight. The Kel Tec tips the scales at 4.25 lbs, whereas Ruger’s carbine is substantially heavier at 6.8 lbs. Neither carbine is exceptionally heavy, but the Kel-Tec weighs less and has a more centralized point of balance. This in turn makes the gun feel lighter. And when it comes to bugout guns, lighter is always better, since shooters will likely carry it often, and shoot it sparingly.

But the extra weight of the Ruger isn’t a design flaw. The gun’s receiver is railed from the factory, and both the rails and receiver are milled from 70757-T6 aluminum billet. This means the Ruger is damn near indestructible.

Here’s another point where both guns are designed with both thrifty, and survival shooters in mind: magazines. 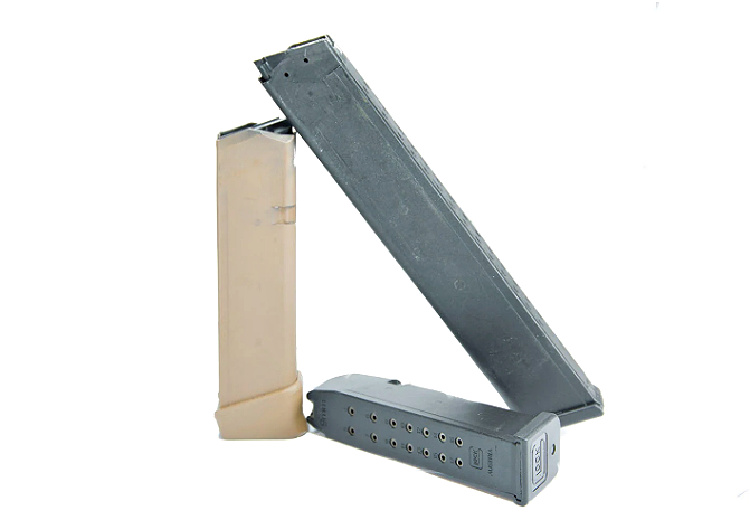 Depending on the model, the Kel-Tec Sub2k feeds from several types of magazines. This includes Smith and Wesson M&P mags, SIG 226 mags Beretta 92 mags, or Glock mags. Since we’re comparing the value of these two guns as bugout guns, the obvious choice is the Glock mag configuration.

Obvious, because Glock pistols are the more prolific in America. So finding spare mags won’t be difficult, or expensive, for shooters.

That said, the Ruger goes about this a little better. The PC 9 ships with an adapter installed that allows it to feed from Ruger SR9 magazines, but also includes a Glock magazine adapter for free. This makes the Ruger PC 9 a little more versatile out of the box.

But affordable magazines and lightweight construction are meaningless if the guns themselves aren’t reliable. So how did these two pistol caliber carbines stack up?

I’ve owned my personal Kel Tec Sub 2000 for a little over a year now. After more than a thousand rounds fired through it, I can count the number of malfunctions on one hand. This even includes when the gun is suppressed. That sounds like an A+ grade to me.

But what about the Ruger?

While I haven’t had a chance to fire quite as many rounds through the Ruger, it has yet to encounter any malfunctions after roughly 550 rounds fired. Just like with the Kel-Tec, this includes all manner of ammo from 95gr frangible to 147gr +P defensive rounds. Again, that sounds like a damn-near perfect run.

Yes, the human factor. With these guns being so different in their layouts, this issue was bound to come up. How do the two guns stack up in terms of being user-friendly? 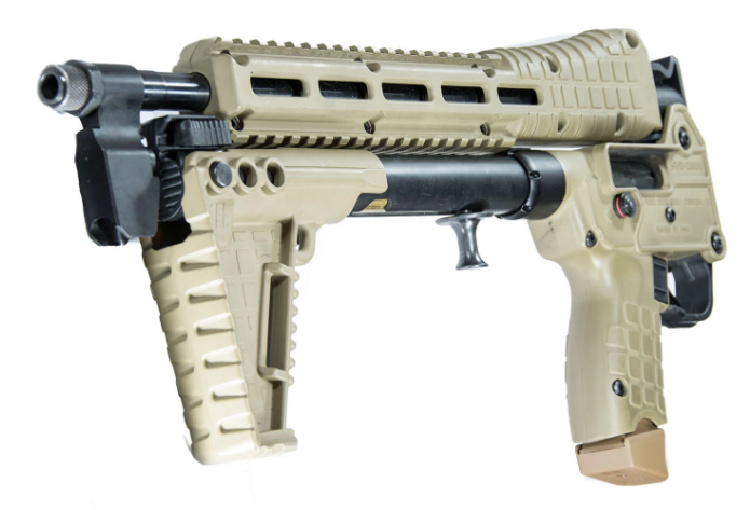 The Kel Tec Sub 2000 folds so it can be stored for quick storage and easy access.

Because the Kel-Tec’s magazine well is configured like that of a handgun, the gun has to use a pistol grip setup. The Ruger, on the other hand, uses a traditional magazine well forward of the trigger group. Behind these, the Ruger uses a standard rifle stock like the kind found on hundreds of hunting rifles and shotguns around the world.

The Ruger PC 9 feels much more solid, but the Kel Tec Sub 2000 has a very real advantage in terms of balance and handiness. Shooting the Ruger with one hand is feasible, but difficult. The Kel Tec, however, could easily be used with one hand while the other hand opens doors, flips light switches, etc.

The Ruger PC9 and Kel Tec Sub 2000 both feature Picatinny rails for mounting optics and accessories. That said, they aren’t equal in this regard. The Ruger is much better suited to magnified optics since the rail is closer in proximity to the shooter’s face.

That said, the Ruger’s rail ends fairly close to the shooter’s face as well. The Kel Tec Sub 2000 on the other hand, permits forward mounting of optics and accessories like tactical lights and lasers. And when dealing with carbines chambered in calibers with relatively limited effective range, the benefit of a magnified optic is questionable.

I have a soft spot for both carbines, to be honest, but there is certainly a clear winner here. If I were discussing which of these two guns were better suited for hiking and backpacking, I think the two would be evenly matched.

While both carbines are excellent in their own right, the Kel Tec Sub 2000 is a better bugout gun.

But since we’re talking about a bugout gun where handiness, weight, and ease of use are paramount, the Kel Tec Sub 2000 nudges out the Ruger PC 9 by just a hair. Don’t get me wrong, though. Both of these pistol caliber carbines are phenomenal and shooters shouldn’t feel under-gunned with either in their prep pack. But if I had to choose a carbine cohort for my 9mm Glock pistol, the Kel-Tec is a lighter, more maneuverable option.

Buy your Magazines from GunMag Warehouse! Be sure to watch GunMag TV too.

Jim is a freelance writer for dozens of firearm publications, the host of the YouTube channel Burst Review and the youngest author to write a cover story for Shotgun News in its 86-years of operation. Jim loves anything that goes, ‘boom’ but particularly enjoys military firearms from the Cold War and WW2. When he’s not slinging lead downrange he can be round hiking in the mountains with his wife Kim and their vicious attack dog, Peanut.